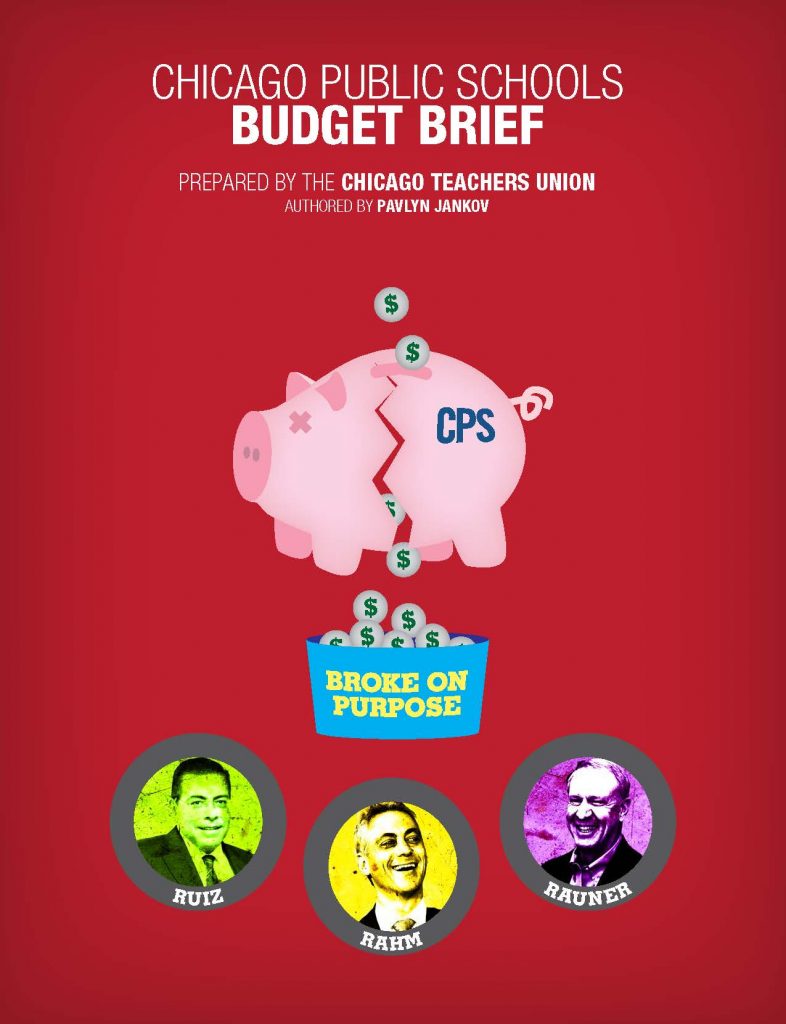 Spending Away from Schools

CPS has repeatedly made the false claim that it has protected classrooms by cutting millions from Central Office and administrative support. Since 2011, the district claims to have made $740 million in administrative cuts. 1 Its definition of “cuts” is non-standard: its “cuts” aren’t actual cuts in spending, but savings on discounted contracts (“if the milk contract weren’t renegotiated, the district would be in the hole for $5 million more”). These “cuts” are often counter-balanced by increases in other areas. 2 The reality is that there was an increase of $22 million, 17%, from 2011 to 2014, on spending for Central Office and network administrative positions. 3 The budgeted amount for these positions, none of which are involved in direct instructional supports to schools, was $130 million in 2011, and increased to $152 million as of December 2014. Positions paying a six-figure salary, increased in the budget by 30%, from $35 million to $45 million.

Where are the spending increases? Administrative offices change names, and departments are broken up, reorganized and aggregated back together so direct increases are impossible to discern. But we can see that despite its narrative of increasing supports and delegating control to the schools, CPS continues to invest in departments to implement its top down agenda. The Office of Strategy Management was newly created in 2012, and was budgeted for just under a $1 million this fiscal year. Combined with other rearranged departments involved in standardized-testing (Department of Assessment), expanding school choice (Innovation and Incubation) and test-based management of schools (Accountability), CPS now budgets a total of $6.1 million just for the position salaries across these departments. Departments with similar functions in 2011, including New School Development, the Office of Perfor mance, Office of Student Assessment, and School Demographics and Planning, budgeted a total of $5.5 million for position salaries. Wherever CPS is making cuts to Central Office-based supports to schools, the cuts are not in departments used to push its corporate school reform agenda.

CPS has also nearly doubled the positions budgeted for its Communications office, increasing salary expenditures from $886,000 for 12 positions in 2011 to $1.78 million for 22 positions in 2014. Similarly, its Family and Community Engagement Office, which primarily serves to organize support for Central Office-directed initiatives, has ramped up from $1.5 million to $2.7 million.

CPS has increased upper management at its Central Office. As they have rearranged network offices numerous times, a notable trend is that more of the salaried positions across those offices are for upper and middle management. The percentage of networks’ related budgets for salaries spent on management and upper administration doubled since 2011, from 43% up to 88% of the $25 million now budgeted for network salaries. 4

The CPS teacher evaluation system ignores the complex needs of our students and instead promotes time-consuming, stress-inducing procedures that do not help students. This system is both unnecessary and expensive. Teachers need time to work together, observe each other’s classes, take advantage of relevant professional learning opportunities and implement helpful suggestions from administrators or colleagues. Instead, teachers are spending hours learning about the intricacies of REACH, the Framework for Teaching, and the Performance Task Handbook; as well as writing pre- and post-conference forms, grading and uploading Performance Task scores, planning test-prep activities and analyzing standardized test data.

In addition to the hours of time teachers spend on REACH instead of students, CPS spends a large amount of money on contractors and vendors for its evaluation system. CPS spent over $2 million on True North Logic teacher evaluation software since 2013, and will incur another $500,000 next year. The district spent $750,000 over the past two years for instructional framework support services from the Consortium for Educational Change (CEC) and has entered a new five-year, $1.1 million contract with the company for evaluator certification. The district also spends $200,000 annually for the value-added calculations used in REACH. A contract with Battelle for Kids for communication services to staff about the evaluation system costs another $250,000.

It is difficult to identify and quantify all Central Office staff engaged directly or indirectly in teacher evaluation work, but when including just those whose primary role is teacher evaluation, combined with annual costs of the aforementioned contracts, at least $3 million was spent in the current year.

Teachers deserve support and not additional stress when it comes to providing quality instruction, improving practice, evaluation and recognition for the roles they play in students’ lives.

Over $7 million was spent in FY15 for four contracts with Wireless Generation, NWEA and ACT Inc. 5 The district also spent $1.7 million over the last two fiscal years on a contract with NCS Pearson for IT supports and services primarily related to tracking standardized test data. 6 The total budget for the Department of Assessment was $8.3 million this year, and school-level expenditures for assessments stood at $1.7 million in December, for a total of $10 million.

The $260 million three-year contract with Aramark for custodial services has already gone $22 million over budget in its first year. Teachers have reported garbage bags that are so flimsy they cannot hold any garbage; watered-down products; an outright lack of any bathroom supplies in the students’ bathrooms; and instead of the fancy “Zambonies” that CPS promised, many schools either received Swiffers or teachers had to buy supplies to clean their own rooms.

The $20 million no bid contract for SUPES was approved even though a principal training initiative was already in place through the Chicago Leadership Collaborative.

CPS has also outsourced more nursing services. CPS started outsourcing nursing to staffing agencies around 1994, but has increased the practice tremendously in recent years, reaching over $30 million in FY 2015. CTU nurses have reported that nurses from the temporary staffing agencies have not shown up for work, and that principals have frantically called the CTU nurses, begging them to leave the school where they are to fill the vacancy. Nurses assigned through CPS offices are already stretched thin, but outsourced services only create another managerial obstacle for schools to navigate—instead of a dependable resource.

Reprioritizing the budget for students

CPS needs to balance its budget by reprioritizing services to students. Millions are wasted on testing contracts, accountability systems that stratify our schools, bad financial deals and unnecessary contracts. Instead, CPS needs to provide the following staff:

At least one certified school nurse or health services nurse stationed full time at every school. This would require hiring at least another 300 nurses at a cost of roughly $30 million, less than the amount we pay each year on toxic swaps to banks such as Loop Capital, Bank of America and J.P. Morgan.

A certified librarian for every school would require hiring another 290 teacher-librarians, at roughly $29 million. Returning Central Office spending to 2011 levels, and reducing spending at the network offices and the Communications office would be enough to fund a fully staffed library in every school.

After more than a decade of skipped and reduced payments, the district has accumulated a steep debt to its employee pension funds. But the pensions are not the only interest-bearing debt the district has. The interest on debt to banks costs over $290 million a year, $36 million of which are interest payments tied to toxic swap instruments. Further, CPS has paid more than $250 million in the past for those swaps, and now stands to pay as much as $200 million in termination fees the banks can now demand.

The district also shells out millions each year to various firms just for the fees associated with processing its bond sales—$2.34 million in the 2015 year, and $17 million since 2009. The city of Chicago also has billions in debt tied to toxic swap deals, and rather than bring suit, Mayor Rahm Emanuel “negotiated” with the banks and agreed to pay in full over $130 million in penalty termination fees to the bank—by taking out more long-term debt, with interest and transaction fees, from some of the same banks. And after a total of $674 million in bonds in May, the city will go to the bond market to borrow over $1 billion in June, pushing more expenses into the future and enriching banks and investors in the process.

The district and the mayor have pinned the district’s financial woes on the pension debt—going to extraordinary and unconstitutional lengths to slash benefits and put off the payments—yet they refused to bring suit against the banks that sold them the interest rate swaps, despite evidence that the risks of these deals were misrepresented. Balancing the CPS budget requires treating pension debt fairly, and clawing money back from bad deals with billionaires and banks.

Chicago Public Schools are broke on purpose. They’ve used the annual specter of a financial crisis to close down schools in disinvested neighborhoods, slash staff and supports from our district schools and narrow the curriculum by extending the school day without appropriate funding for arts, music and libraries. At the same time as they have used the budget to cut resources, they have recklessly outsourced essential services to private crony companies; added new charter schools; spent millions in technology upgrades for standardized testing; expanded staff at Central Office when they have claimed to make cuts; and continued to invest in departments that are essential to the district’s agenda of over-testing our students and starving our schools through school choice.

The real structural deficit is the educational debt CPS has to our students. Yet the administration places the blame on modest teacher pensions which it has refused to fund, while debt payments to banks and usurious interest rates are paid unfailingly without a whisper of dissent. Through their refusal to get progressive revenue, the mayor and his peers from the financial sector have trapped the city and CPS in a cycle of broken budgets and a dependence on financial instruments that exploit Chicago residents to enrich the corporate class.