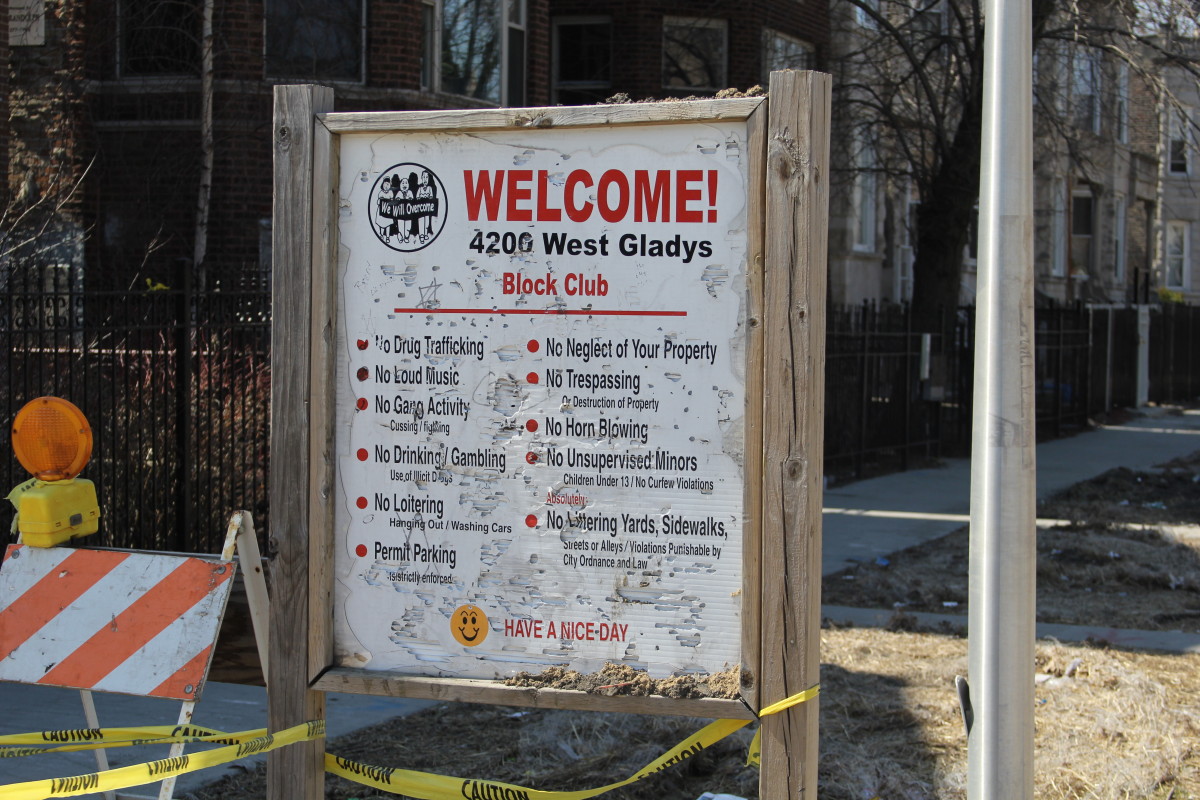 Successful school experiences start at home. The educational accountability system expects all children to achieve at the same rate, even though some children come to school after a restful night in a warm bed while others come to school from the backseat of a cold car or from the bed of a shelter. All of Chicago’s students deserve to have a safe, warm, and secure place to call home. These homes should be affordable and free of lead and pests. These homes should also be secure for the long-term. As is detailed in this section, Chicago’s housing policy forces students and their families to navigate difficult terrain, from the destruction of public housing, to indifferent absentee landlords, unaffordable rents, foreclosures, and the Mayor’s refusal to release Section 8 vouchers. Chicago’s students deserve a much more equitable housing policy.

School segregation is highly correlated with residential segregation, and the city’s extreme housing and school segregation have detrimental effects on students. Due to the end of the 1980 federal consent decree which required that CPS move towards student and staff integration, the district has abandoned desegregation as a policy. School closings, turnarounds and charter school proliferation are saturated in the same communities that have been hardest hit by the housing market crash, the loss of public housing, and a lack of retail development. Consequently, de facto school and neighborhood segregation and all its accompanying injustices have become accepted as the norm. A startling 69% of Chicago’s Black students attend intensely segregated schools, in which greater than 90% of students are African American, making CPS segregation barely less than it was in 1984. 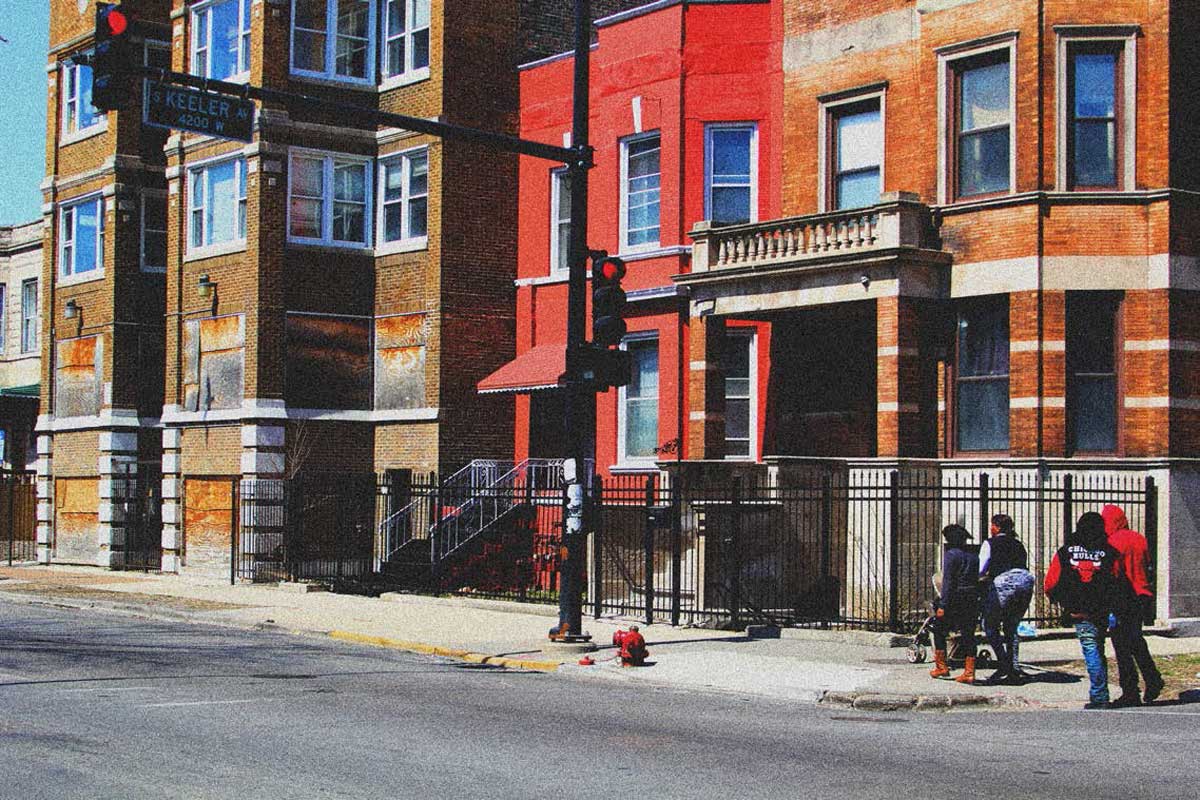 To be clear, going to a school where all the students are of the same racial background is not a problem in and of itself (see Du Bois, 1935). In Chicago, however, highly segregated African American schools lack the financial and staffing resources to effectively serve segregated high-poverty neighborhoods. Overcrowded Chicago Latino neighborhoods also suffer from overcrowded schools and classrooms, as well as insufficient numbers of bilingual teachers. CPS policies also persistently disrupt and undermine these schools. For example, students at segregated Black schools are five times as likely to be impacted by school closings or turnarounds as students at schools with a 75% or lower African-American population. Schools serving wealthier and whiter students are never expected to fire the entire school staff; yet, this disruptive tactic has been used repeatedly on the predominately Black, south and west sides of Chicago. Segregated high-poverty schools are also more likely to be placed into CPS’ lowest performance tier, which degrades local decision-making by reducing control of democratically-elected Local School Councils over the school budget and principal selection.

Because of policy-makers’ continued refusal to address the city’s high degree of residential segregation, Chicago remains one of the most segregated cities in the U.S. While less segregated than in past decades, Chicago is the most segregated city in the U.S. with a population greater than 500,000 (Glaeser & Vigdor, 2012). Such measures have particularly strong implications for communities and schools historically impacted by racism, segregation, and marginalization, who typically suffer from concentrated income and resource disparities as well (see Massey & Denton, 1993).

The glaring gaps in Chicago’s social safety net for housing have a profound impact on public schools. Residential mobility and school instability often go hand-in-hand. In 2006, the residential mobility rate was 20% for Black students, twice as high as that of White students (De La Torre, 2009). These moves have dramatic impacts on students’ education:

Residential moves often lead to interruptions in instruction, excessive absenteeism, chaotic environments not conducive to studying, stress, disruptions of peer networks (for older children), and interference with the development of close, personal relationships (for younger children). Educational problems associated with hyper-mobility – frequent moves – may also be worsened by other associated risk factors that lead families to move often, such as poverty, an unstable home life, and domestic violence (Gasper, DeLuca, & Estacion, 2012).

Research on student mobility in Chicago specifically points to the impact on learning, even for students who did not move. As reported by Kerbow (1996):

In schools with a high rate of student mobility, teachers were unable to gauge the effectiveness of their instruction, lessons become review-oriented, and the curricular pace slowed, so that by fifth grade, the curricula at schools with hyper-mobile student populations were a year behind more stable schools.

The Mayor’s school closure policies exacerbated rather than reduced student mobility. School closures, affecting predominantly lower-income neighborhoods, result in involuntary student mobility. The Bronzeville community, for example, was harshly affected by numerous school actions; from 2000 to 2012, 15 schools were shut down. Another 4 were closed in 2013. Over this time frame, many schools that received students from closing schools were subsequently closed, so that a student could be pushed from one closed school to another four different times over a span of seven school years (Ahmed-Ullah, 2012). Those students forced by closings to change schools were twice as likely as unaffected students to change schools yet again (Gwynne, 2009). The damages that school mobility causes to students were compounded at every new school.

A significant shortage of affordable housing is a major driver of Chicago’s students’ housing instability. The city of Chicago and the Chicago Housing Authority (CHA) have, since the 2000s, materially divested from public housing, tearing public housing complexes down, and promoting scattered site housing, mixed-income developments, and vouchers to fill Chicago’s large need for adequate and affordable housing. Not only has this approach fallen short of what’s needed for housing equity, the city and the CHA have not even fulfilled their limited objectives. 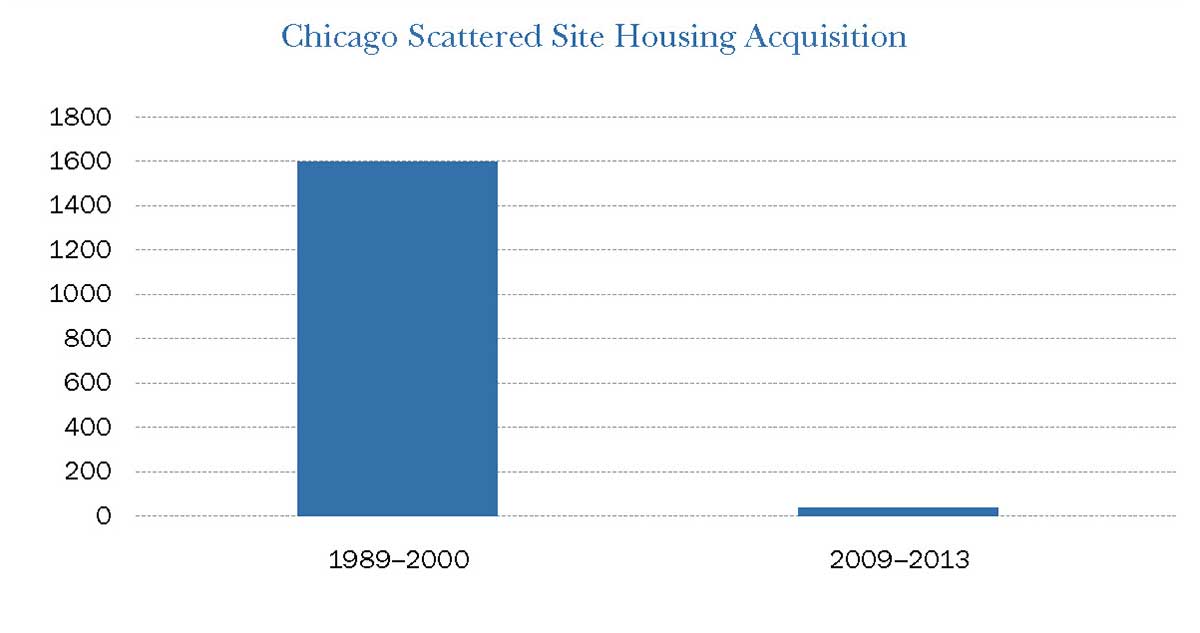 A 2014 analysis by the Center for Tax and Budget Accountability (CTBA) showed that the affordable housing gap has been made worse over the last several years by CHA policy. Over the last five years, the CHA issued 13,500 fewer vouchers each year than they were funded for, instead holding onto hundreds of millions in cash reserves (Center for Tax and Budget Accountability, 2014).

Chicago’s low-income families face additional housing challenges beyond the CHA. Section 8 vouchers are a crucial support for recipient households, yet the majority of Section 8 voucher holders find accommodations in low-income neighborhoods on the South and West sides of Chicago, contributing to the city’s economic and racial segregation. 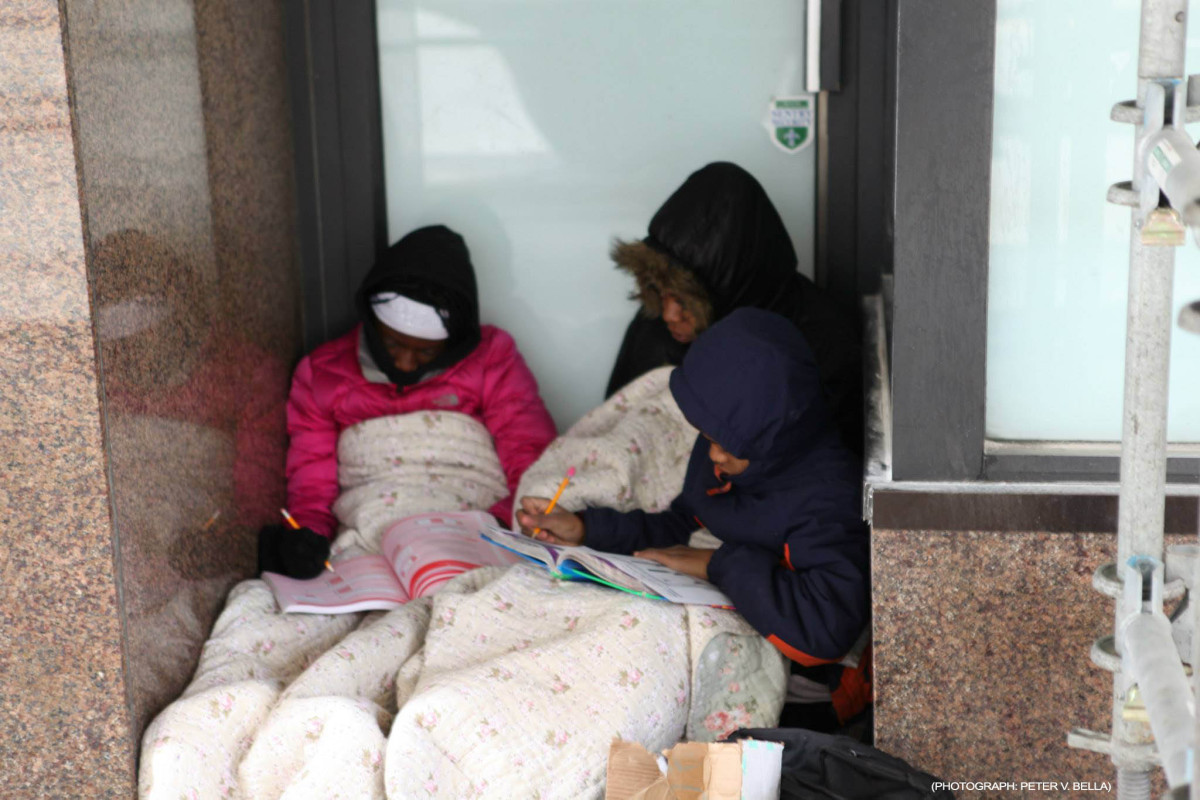 Many of the Chicagoans unable to find stable, affordable housing are families with children. Students in CPS who have been identified as being without stable homes, living in families doubled-up with relatives, in shelters, or otherwise without residence are among the most underserved. Also referred to as homeless, students in temporary living situations (STLS) do not know for sure where they will be sleeping each night or how long a temporary situation will last. Their family’s economic status is dire. Doing homework may be impossible, and is certainly of lower importance than meeting physical and emotional needs. Having school supplies or getting to school may be complicated or often not possible. Unsurprisingly, STLS attendance rates are considerably lower than students currently in permanent living situations. In the 2012-13 school year, for example, the STLS attendance rate was 85.2% whereas the attendance rate for all students was 92.5%. CPS is supposed to provide transportation assistance to STLS students, so they can remain in their home school, but this happens inconsistently, because schools are inadequately resourced, and not all make transportation assistance a priority.

During the 2013-14 school year, 22,144 students in CPS were classified as homeless (Chicago Coalition for the Homeless, 2014). They were 84.4% African-American, 12.2% Latino, 1.6% White, and 1.6% other ethnicities. For the 4369 homeless students who were also identified with a disability, appropriate supports were more difficult to obtain.

Most STLS live doubled-up, in others’ homes, often in overcrowded, tenuous conditions. One young homeless student, Jarvis Nelson, was featured in an article about the increase in STLS (Emmanuel, 2012 January). Jarvis had attended three different schools in four months. His mother has been in and out of low-wage jobs. Jarvis, his toddler sister, and mother have lived with various relatives in cramped spaces, but those were, of necessity, temporary. At the time the article was written, they were living in a shelter, which was also temporary. 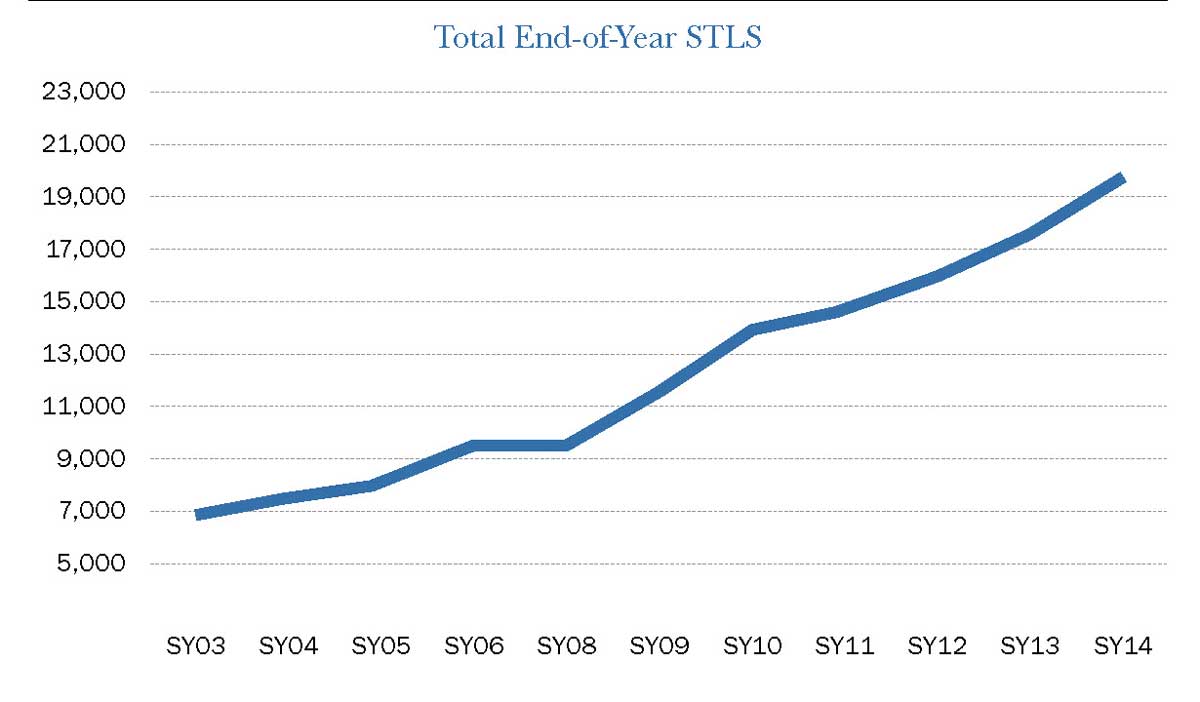 Unfortunately, Jarvis’s story demonstrates two disturbing trends in the district. The figure below indicates the first trend: the growth in number of CPS homeless students. The homeless student population has exploded over the last 11 years, almost tripling between 2003 and 2014. A second disturbing trend only serves to make students’ and families’ lives even more challenging: services for these students are declining. STLS resource allocations have remained flat even though STLS populations have increased. Students like Jarvis are entitled to fee waivers, tutoring, free uniforms and school supplies, in addition to transportation assistance. However, some students receive only one uniform, which they are required to wear every day, even though washing the uniform daily may not be possible.

Additionally, each CPS school is only required by law to have one staff member who serves as the STLS coordinator, regardless of the number of homeless students enrolled in the school. This person has a full-time position, such as social worker or guidance counselor, and has STLS services added to her or his work. Consequently, STLS coordinators have little time to work with students and families to address and attempt to mitigate the significant challenges they face.

A related issue is that many schools have high concentrations of homeless students, as shown in the figure below. There are 48 CPS schools with an STLS population of 20% or more of the student body, and half or more of the student population is homeless in some schools. There are no extra supports, such as social workers, nurses, counselors, or reading tutors, provided to these schools. 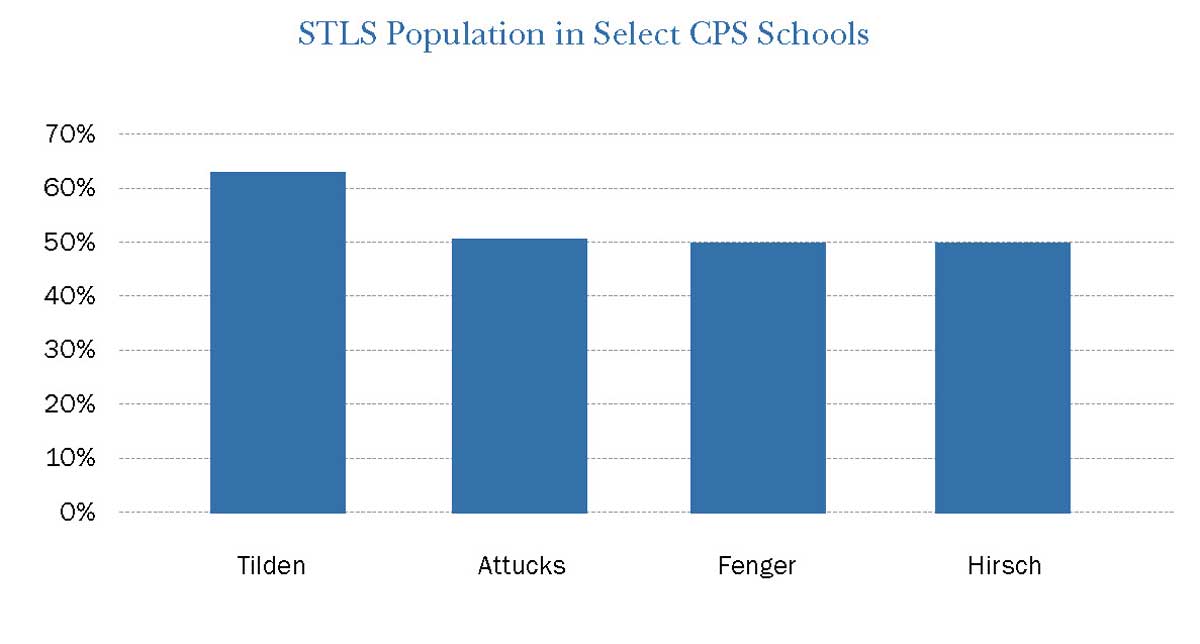 A just Chicago would address the affordable housing and STLS crises. It would greatly increase the numbers of affordable and homeless housing units built across the city, including in wealthier and highly resourced neighborhoods. Rental housing must be affordable, regularly inspected for building code violations, and have decreased numbers of evictions. Students need housing policy reforms aimed at ending homelessness and school mobility.

Kerbow, D. (1996). Patterns of urban student mobility and local school reform technical report, (Report No. 5). Chicago: University of Chicago Center for Research on the Education of Students Placed At Risk.

Center for Tax and Budget Accountability. (2014). A Fiscal Review of the Chicago Housing Authority. Retrieved from this URL.

Maidenberg, M. (2013, October 5). Coming to a block near you: CHA subsidized housing? Crain’s Chicago Business. Retrieved from this URL.

Chicago Coalition for the Homeless, (2014, July 24). 22,144 homeless students enrolled in Chicago Public Schools this past year, Retrieved from this URL.