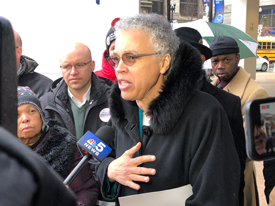 I’ll be frank: When it comes to public education, Toni Preckwinkle is the best choice for mayor. Unlike her opponent, Toni has supported core Chicago Teachers Union policies from the beginning of her campaign, such as an elected school board; an end to school closings; equitable and sufficient funding of our schools; restoring bargaining rights on issues like class size and clinician staffing (extremely important); and ending charter school expansion.

Toni has pledged her support for rent control and the restoration of affordable housing in Chicago for the working class and the families we serve in our school communities. This is a key measure in ending the push-out of Black families that threatens to depopulate many of our schools.

Chicago politics is a contact sport, and corporate lawyer Lori Lightfoot presents a formidable challenge. But we have concerns:

Hearing about her plan to repurpose closed schools as police training academies was disappointing, to say the least. Rahm devastated those communities when he closed a record 50+ schools in 2013, and our members, their students and the families that remain deserve better.

Toni, however, has made a career out of leadership on issues important to our union. While Donald Trump and Bruce Rauner worked to dismantle the Affordable Care Act, Toni protected and expanded access to health care as county board president. She brought coverage to 350,000 people, protecting the health of scores of low-income and immigrant families. She also led the way in reforming Cook County Jail, reducing its population by 30 percent.

Toni earned our endorsement for mayor back in December, but at the Monday, March 11, House of Delegates meeting, our union voted overwhelmingly to endorse three additional candidates for Chicago City Council (left to right): Matt Martin (47th Ward), Milly Santiago (31st Ward) and Andre Vasquez (40th Ward). We welcome them into the CTU family as champions of educational, economic and social justice, and support them in their fight for the schools and city we all deserve.

No matter how you vote, thank you for your support and for all that you do for our students and their families. We will need that support as we continue our charter school bargaining and contract negotiations with the Board of Ed. As we approach April 2, I ask that you take advantage of citywide early voting and support the CTU-endorsed candidates in your area (if there is one), including Toni Preckwinkle for mayor.

This is a pivotal time in Chicago’s history, and regardless of your choice, voting is a way of creating the change we want for our city. Please click here for a list of early voting locations.

Please also consider making a donation to the CTU-PAC, a key tool to support our members and other candidates in electoral races. When we fight, we win!