Members may recall that school clerk Deanna Myron, who worked at Curie High School for over two decades, was targeted for layoff. We’re delighted to report that we’ve secured a favorable settlement in Deanna’s arbitration and ULP cases opposing her layoff. 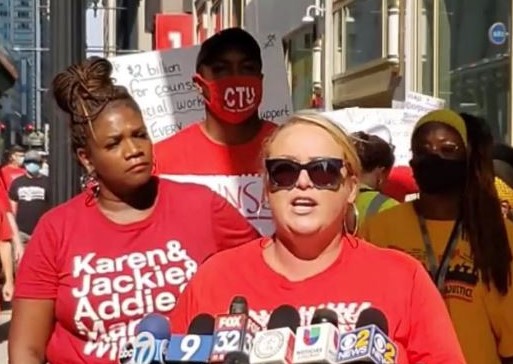 In the fall of 2020, Deanna (pictured right at mics) was a key witness in our arbitration win over CPS, which charged the district with violating the health and safety clause of our contract by requiring school clerks and technology coordinators to report to work in-person while CPS was still operating remotely at the height of the pandemic. Deanna went on to be an important member of our bargaining team during our negotiations for a safety agreement in the fall and winter of 2020-21, spoke at several CTU press conferences advocating for educator safety, and participated in the CTU Summer Organizing Institute.

CPS closed Deanna’s position and laid her off following the 2020-21 school year, despite the fact that Curie’s budget was increasing by $1.3 million the next school year.

“That CPS move was wrong on so many levels,” said CTU Deputy General Counsel Thad Goodchild, who headed up the union’s fightback on behalf of Deanna. “We immediately pushed back to demand that CPS respect Deanna’s rights as a worker and a CTU member — and I’m delighted to report that our opposition to this unfair firing has succeeded.”

The Union filed a grievance and a ULP alleging that Deanna’s layoff was retaliation for her union activity and violated the layoff provisions of our contract. On the eve of the arbitration hearing, we reached a settlement with CPS. Deanna has been rehired at CPS as a payroll specialist and, under the settlement, she will retain all of her accrued seniority and benefits and receive $32,500 in back pay.

“CPS clearly tried to punish me for standing up for our members’ rights — and I’m thrilled that the CTU stood up, pushed back, and demanded that my rights and my work be protected,” says Deanna.

Rank and file members like Deanna stuck out their necks and demanded their rights — especially for PSRPs and other members who Mayor Lightfoot put at special risk in some of the darkest days of the pandemic.

“Our PSRPs, from school clerks like Deanna to our teacher assistants and more, are the backbone of our school communities,” said CTU Recording Secretary and PSRP-for-life Christel Williams Hayes. “We’re delighted we’ve won relief for Deanna in our ongoing fight to force Mayor Lightfoot to respect our members’ contractual rights and human dignity.”

The only think that prevents the mayor or her CPS team from trying to violate our rights is our organizing, our unity and our refusal to back down from defending members. We’ve forced the boss to honor those rights for Deanna — because when we fight, we win.