“We shut down management’s big ticket fundraiser on Thursday and forced them back to the bargaining table Friday,” said Chris Baehrend, chair of the charter division of the Chicago Teachers Union. “Our militant action in defense of our students won us every major demand from management within 24 hours.”

“These are demands we’ve won in every charter contract we’ve negotiated since December,” said Baehrend.

The CTU’s charter division staged the first strike against a charter operator in U.S. history—against UNO/Acero in December—and the first multi-employer charter strike in the nation’s history this spring, against Instituto, Pilsen Wellness and ChiArts, which settled on the eve of the May Day strike. The CTU’s charter division has launched a wave of militancy across the charter sector that has raised standards for all educators in Chicago, stopped charter expansion, and put the school privatization agenda on its heels.

As the CTU strike of CPS-run schools passes its seventh day, the union is fighting for many of the same gains that its charter division has won in schools like Passages. To date, Chicago Mayor Lori Lightfoot’s bargaining team has yet to agree to parallel CTU demands to raise the wage floor for impoverished teaching assistants, school clerks and other paraprofessionals, reign in exploding class sizes with enforceable caps, and put promises by CPS and the mayor to alleviate desperate shortages of school nurses, social workers, librarians and other critical front line staff in writing in an enforceable contract.

Those sticking points remained at the CTU/CPS bargaining table Friday, as rank and file teachers and support staff plan to rally Saturday at 10:00 a.m. at Union Park with striking SEIU Local 1 janitors, special education classroom assistants, bus aides, security staff and other workers who are struggling for an agreement that will also help their low-wage workers. SEIU’s bus aides make less than $16,000/year. Saturday afternoon at 2:30 p.m., striking CTU special education teachers will visit the home of CPS board of education president Miguel del Valle, one of the city’s most prominent advocates for public education, to appeal to him to support the need for protections for the legal and human rights of students with disabilities.

“We’re asking CPS to apply a fraction of their $7.7 billion budget to pay our paraprofessionals a living wage, get our special ed students the services they deserve, reign in monstrously overcrowded classrooms, and address crisis-level shortages of school nurses, social workers, librarians and other essential workers,” said CTU President Jesse Sharkey.

“These are all issues that our sisters and brothers in charter schools and every other school district in the state can both bargain and strike over. The mayor has a real opportunity to keep her campaign promises for equity and educational justice by putting them in writing in an enforceable contract. She should seize that opportunity and let our students go back to school.”

The CTU bargaining team returns to the table Saturday, and negotiations will continue all weekend. 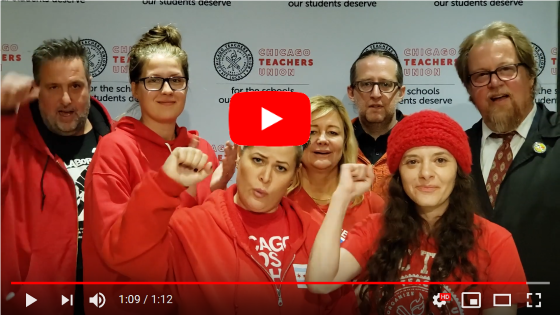 Click on the video below to view Friday evening’s CTU press availability on the status of bargaining. Talks were cordial, but there were no breakthroughs on questions like class size, staffing, prep time or PSRP wages—all of which members have told the bargaining team are critical to ending the strike.

Scammon steps it up

We have so loved all the videos of dance routines, cheers and songs to keep our picket lines up and exciting. Shoutouts to the picket team at Scammon Elementary and their videographer, Mr. Lee, who’ve stepped it up, so to speak, on these videos. We hope everyone enjoys tonight’s from-the-line video, “We do it for the K-I-D-S” as you kick off your weekend. 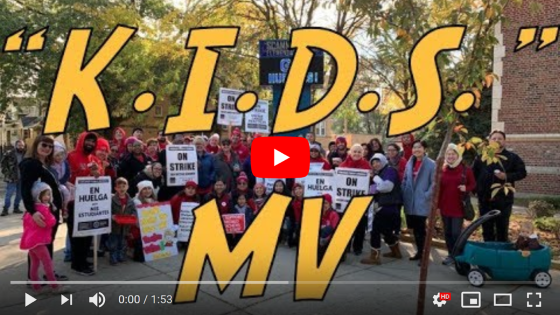