MENUMENU
Home > Posts > Their fight is our fight

Their fight is our fight

Southeast Side teachers, students join the fight against General Iron 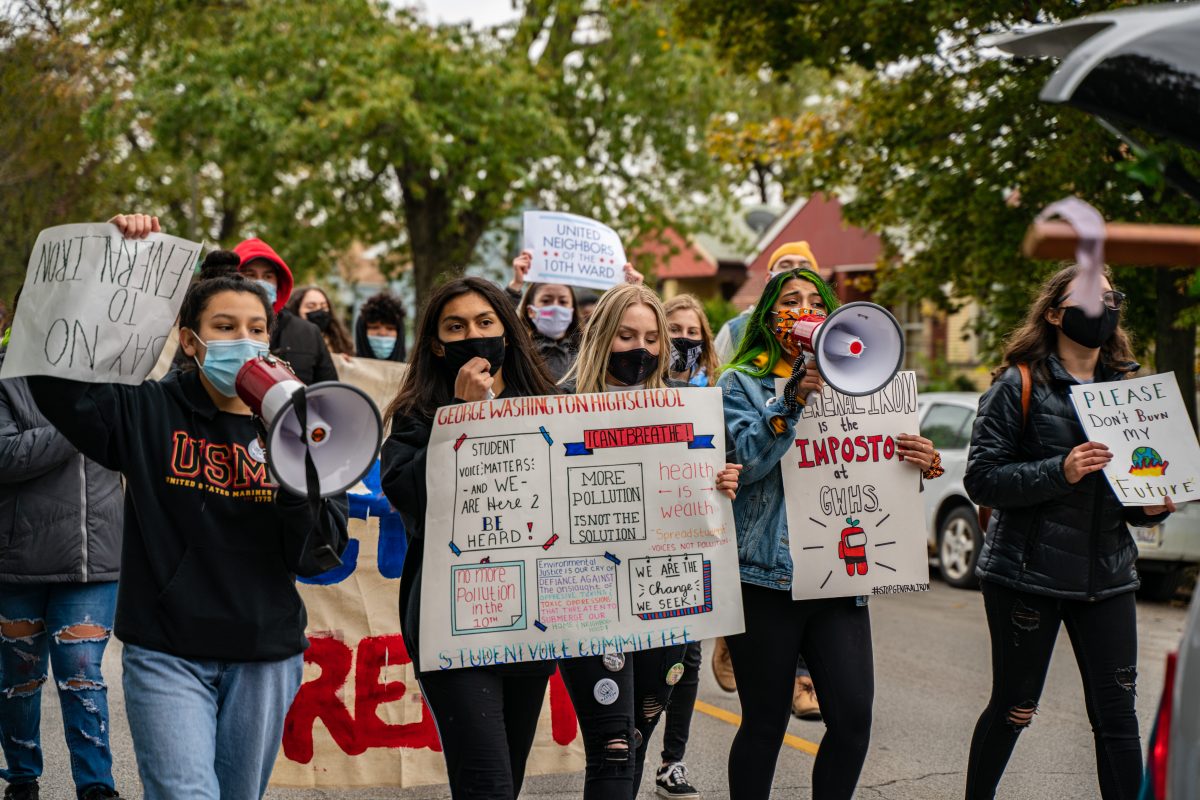 For 30 days, a group of environmental activists on the Southeast side engaged in a hunger strike to stop an industrial metal shredder from relocating just half a mile from two public schools, Washington High School and Washington Elementary school. The courageous action drew support from across the city and nation, including 25 CTU members who joined a one-day solidarity hunger strike in February.

The hunger strike and its coordinated actions helped push the mayor to delay issuing a final permit to General Iron’s parent company, RMG. While the fight is far from over, the only reason the mayor buckled is because youth, parents, teachers, and community members dared to stand up to a serial polluter. No matter what happens next, the CTU members will be there to stand in solidarity with Southeast side residents.
Our profession calls upon us to build strong relationships with our students as well as with the communities we serve.

Chuck Stark, a biology teacher at Washington High School, is one of three activists who first began an open-ended hunger strike to bring more urgency and visibility to the campaign to stop General Iron. The company is a known serial polluter, that wants to move operations from wealthy, white Lincoln Park to the majority Latinx and Black Southeast side.

The hunger strike was an escalation of a years-long campaign that has gone largely ignored by decision-makers in City Hall, including Mayor Lori Lightfoot. So far, she and Commissioner of Public Health Dr. Allison Arwady have refused to deny General Iron’s final operating permit.

The fight to stop General Iron’s relocation has brought together teachers, students, and parents who have joined forces with local environmental justice activists to protect their school community from increased industrial pollution. This campaign represents an important link between the movements for environmental justice and education justice. It also illustrates the power CTU members have when we stand together with our school communities.

In October, students from Washington High School’s Student Voice Committee and Black Student Alliance led a youth rally against General Iron outside the front entrance of their school building. Some of the students who planned the rally were freshmen who had never even set foot inside their own school due to the pandemic. 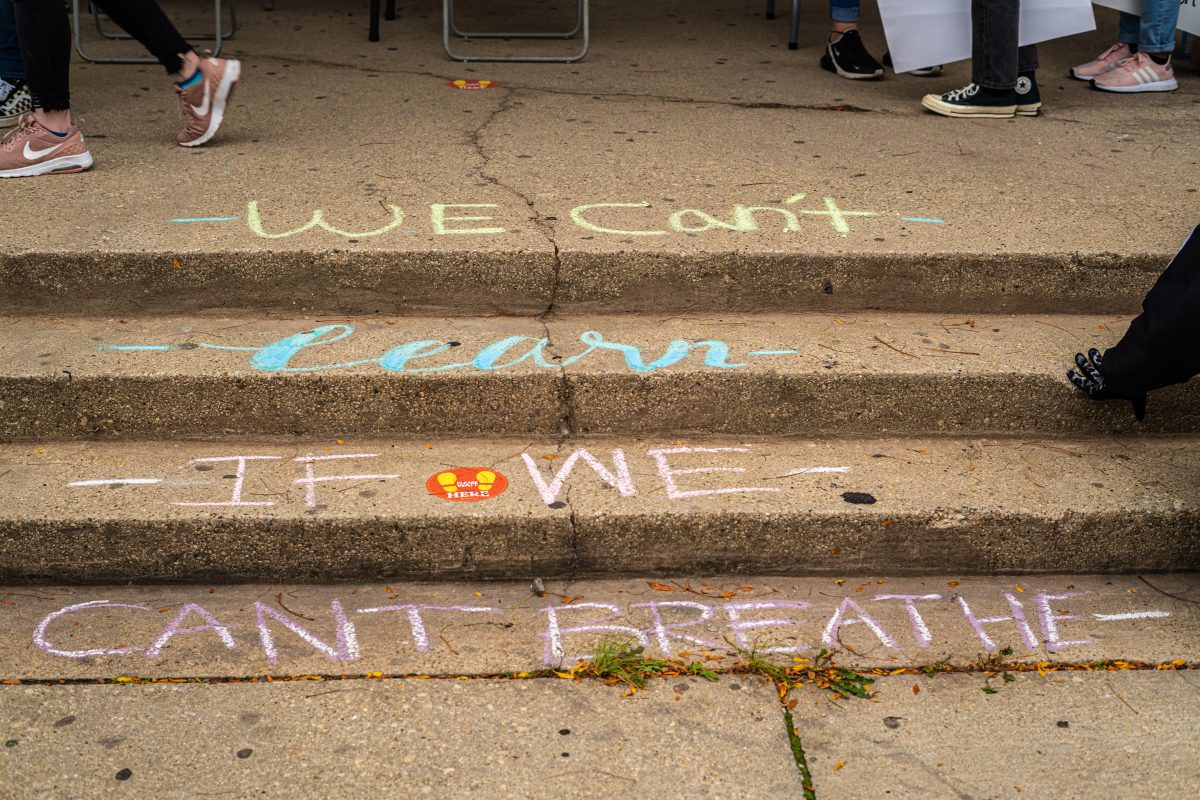 Students painted banners and used sidewalk chalk to write the message “We can’t learn if we can’t breathe,” across the cement stairs leading to the school entrance. This was the moment young people became the leaders of this fight and the rest of the city took notice.

For Trinity Colón, a Student Voice member, the campaign to stop General Iron has a deep connection to her experience in school.

“I have learned that, unfortunately, in the city of Chicago, where you live determines many things about your health and well-being. There were these vans that would come to my elementary school. I knew them at the time as asthma vans and seasonally they would take out most of my friends and half of the classroom to measure and treat their breathing issues. I thought this was normal for every little kid. I thought that everybody at a young age had to be hooked up to a nebulizer just to breathe.”

When asked how he first got involved in this campaign, Stark said he believes teachers have a duty to stand up for issues impacting their students.

“When I think about teaching biology, I ask myself what do my students really need to know? If we say, as educators, that we’re actually preparing our students for the future, we need to teach them to be part of society,” Stark said.

Stark argues that teachers wanting to address environmental racism in the classroom have an important obligation.

“It’s easy to re-traumatize students if we only talk about the bad things that happen in their neighborhood,” he said. “We have to tell the story of the movements and people who have fought against these injustices. I needed to show my students that their community is home to an environmental justice movement that needs you to get involved.”

The fight to clean up the Southeast side has deep roots. Community activists have fought for decades to protect themselves from industrial pollution ranging from toxic lead levels and manganese in the soil to open piles of petroleum coke, a byproduct of oil refining.

For teachers at Washington High School, this legacy of resistance creates a unique opportunity for us and our students to connect with veteran environmental activists and community organizations.

Donald Davis, a social studies teacher and advisor for the Student Voice Committee. He sees this work as part of grounding student learning within the most pressing issues facing the community. 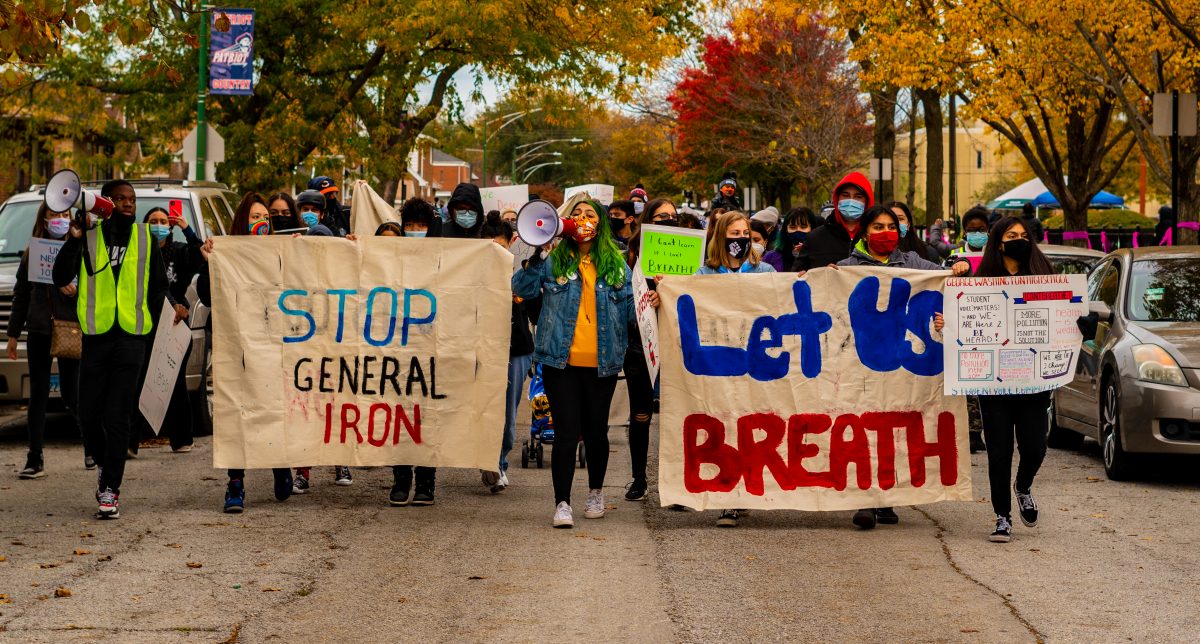 “The power of this movement has been in connecting what students are learning in biology and civics classes to the wider world and taking action to address the environmental racism that is evident in General Iron’s move from a majority white Lincoln Park to the majority Black and Brown 10th Ward.”

Davis has played an active role in connecting students with community groups. He hopes these connections will lead to long-term improvements.

We serve the whole community

As CPS teachers, we know our job doesn’t end when we leave our classrooms and clock out at the end of the school day. Our profession calls upon us to build strong relationships with our students as well as with the communities we serve.

For those of us who teach in the Southeast side, our ability to educate and serve our students is compromised daily by high levels of air pollution and the legacy of environmental degradation from the steel industry that once dominated the area. That industry is long gone, but residents have been left to deal with the environmental consequences. By joining movements for environmental justice, educators can win improvements in our student’s learning conditions and in our own working conditions. We can empower our coworkers to stand up for what our communities deserve.

When asked what the fight against General Iron has meant for him, Davis put it this way:

“Schools do not exist in a vacuum. They are part of a larger community with distinct needs and identities. For this reason, educators cannot ignore the challenges that exist in the inequities of Chicago. Our students and communities need mental health services, quality housing and food, and good-paying jobs and careers. If those don’t exist, then we can’t expect quality learning to occur. If we raise up our neighborhoods, we will also be more responsive to our students’ needs.”

Lauren Bianchi is a teacher at Washington High School.