MENUMENU
Home > Posts > The right to choose is under attack

The right to choose is under attack 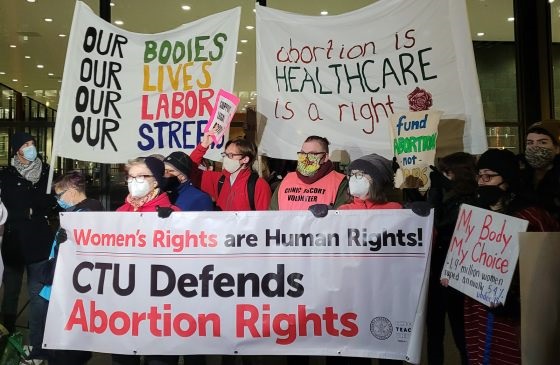 We are outraged by the U.S. Supreme Court’s decision in Dobbs v. Jackson overturning the right of pregnant individuals to control their bodies, their lives and their futures. The announcement today by a right-wing Court, which includes three justices appointed by former president Donald Trump, is an attempt to completely eliminate the right to abortion — a right that has been fundamental to the lives of individuals in our country for nearly half a century.

While we in Illinois are fortunate at the moment to have a strongly pro-choice governor and strong pro-choice majorities in the state legislature, in neighboring states — Iowa, Indiana, Wisconsin and Missouri  —  pregnant individuals would lose the right to control their bodies.

This is not acceptable. In May, our highest representative body, the CTU House of Delegates, passed a resolution in support of reproductive rights. The resolution stated, in part, that:

The Chicago Teachers Union will publicly stand in defense of abortion and reproductive rights and will encourage its members to participate in activities including rallies and demonstrations, lobbying and political campaigns, educational events, and other actions to support the right to abortion, contraception and other reproductive rights.

Join the Chicago Teachers Union, the CTU Women’s Rights Committee and other organizations at a Day of Decision Rally TODAY at 5:30 p.m. in Federal Plaza (Dearborn and Adams) and again at noon tomorrow, June 25, for a march and rally, also in Federal Plaza.

Today’s decision, which clearly represents a right-wing fringe and not the views of the majority of Americans, is an attempt to silence women and others, and revert to a previous era of blatant gender discrimination.

We must stand up and fight back. We will not go back to the dangerous days of back alley abortions and deaths. We are a union of women, and LGBTQIA+ educators, students and families, and we will defend the rights of women and all individuals to make decisions regarding their own bodies.

We also must ensure that those who make laws in this state stand up for the fundamental right to choose. Early voting in the Illinois primary election runs now through June 27. Election Day is June 28. Find the CTU’s endorsed candidates at ctulocal1.org/vote.