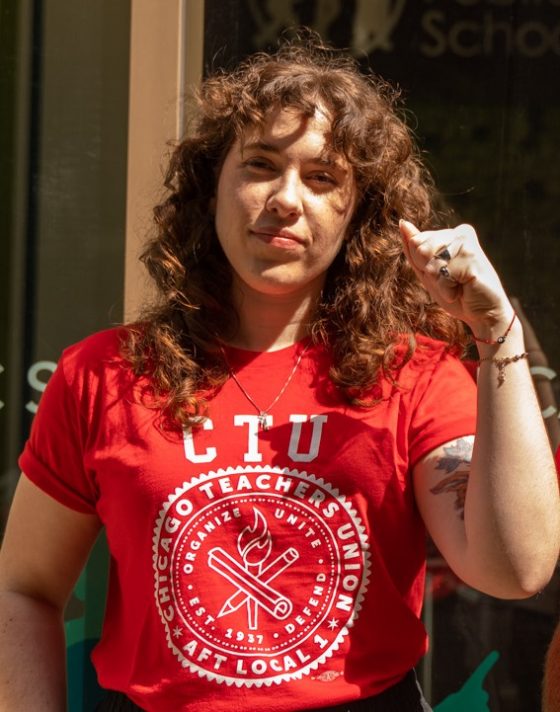 Lauren Bianchi didn’t set out to become a teacher. She was in a pre-nursing track at University of Illinois-Chicago in 2012. But, then, the CTU went on strike.

“I remember seeing people on the CTA and all over the city wearing red and cheering each other on and the energy was really electric,” she said. “I had the sense that people believed this was a chance we could win major changes.”

Through the Chicago Teachers Solidarity Campaign, Bianchi began attending rallies and bringing food and drinks to striking teachers. She felt inspired by what she saw on the picket lines and this would eventually influence her decision to become an educator.

“I knew I wanted to work in spaces where I could contribute to improving people’s lives and it became clear to me that teachers have a lot of power to improve systemic issues facing our communities,” she said.

Bianchi was born and raised in north suburban Lake Zurich. Her parents had grown up and lived in Chicago’s Edgewater neighborhood but moved to the suburbs in the 1980s. Her grandmother, however, stayed in Chicago and Bianchi remembers loving the summers and holidays she spent there.

She moved to Chicago after high school and enrolled at UIC. She knew she wanted to work in public service so began on a pre-nursing track but eventually received her bachelor’s degree in sociology and gender and women’s studies. Once she realized teaching was her field, she later returned to UIC where she earned her masters degree and teaching certification.

In 2018, she accepted a position at George Washington High School, where she teaches social studies. She recalled how, when she first started, some of her colleagues warned her about the risk of union activities.

“It was union activities that inspired me to become a teacher, so I couldn’t abide by that advice,” she said. She became a strike captain during the 2019 strike, in her second year of teaching, and never looked back.

Once at Washington, she learned more about the history of environmental racism in the school’s southeast side community and she and her colleagues designed a curriculum that spoke to their students’ specific needs.

That type of work is the best part of her job — and also her biggest challenge.

“My favorite part of my job is designing curriculum that my students will connect with and find meaningful, because, as a young person, I rarely had the opportunity to learn about the things I cared about,” Bianchi said. “But it’s also the biggest challenge because I’m trying to create a classroom culture built on learning, mutual respect and care, when many of my high school students have spent years in a school district that told them test scores and grades are all that matter.”

This past summer, her efforts to defend her school community earned the ire of Mayor Lori Lightfoot, who tried to fire Bianchi and colleague Charles Stark for their work with community members opposed to the city’s plan to move a toxic metal shredder to just down the street from George Washington.

“When I learned that community members were protesting against General Iron, I had to step up and advocate for my students and their families,” she said. “For me, it was an extension of what I observed during the 2012 strike, that student learning conditions are teacher working conditions. And when it comes to environmental justice, having clean air and water are also issues of concern for educators.”

That’s why she is an active member of the CTU Climate Justice Committee, which is leading the push for green school buildings at Washington High School and throughout the district. The Washington facility is literally crumbling around its students and school community members are pushing for a new, green building.

Lightfoot’s efforts to dismiss Bianchi and Stark failed, in large part to the support of community members they had built close relationships with over the years. And, the community’s push back forced the mayor to halt the shredder opening. Bianchi said those wins reaffirmed an important lesson.

“As a teacher, I want my students to know that they have the power to change society by working together at the community level,” she said. “We often feel powerless as individuals but when teachers, parents, and youth are united, we have the ability to make transformative changes.”