On pensions: We oppose the mayor's plan and SB1922

In carefully examining the pension "deal" put forth recently by Mayor Rahm Emanuel, we have found that the plan does not, in any way, solve Chicago's pension problem. As we have said many times before, over and over and over again: This is a revenue problem.

Our members are rightfully enraged, as the cuts that the mayor is proposing are just more of the same—more of the same burden being placed on citizens who have endured mass school closings, the closing of mental health clinics, unemployment and continued crime in our neighborhoods.

This is continued disinvestment in our city, which will send hardworking men and women into poverty with no safety net, as there is no social security for our workers. Dedicated school clerks, teacher aides, lunchroom workers and janitors from the South and West sides of Chicago—workers we depend on—will be harmed by this draconian plan.

The Chicago Teachers Union did not negotiate this bill and were not invited to the table for discussions. We are strongly opposed to this plan and intend to vigorously fight this attempt at pension theft with every fiber of our union.

Let your elected officials know now that this vote is a vote for your present and future! Let them know that you are opposed to this plan and will fight for your retirement savings. Let them know the following:

Pension talk from Karen Lewis to Rahm Emanuel: 'Let us at the table' 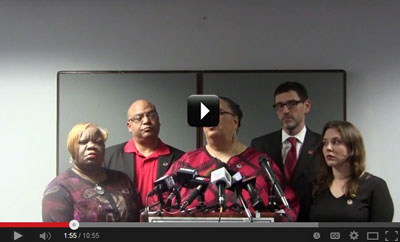 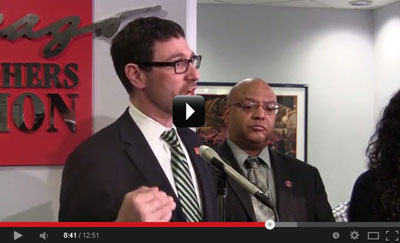