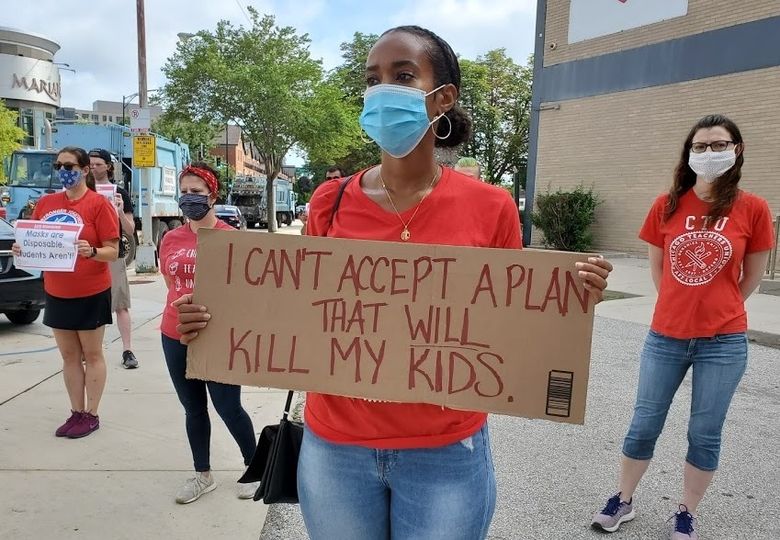 Mayor Lori Lightfoot has walked away from the bargaining table again after instructing her CPS leadership team to submit a “last, best and final offer” to the Union at 11:15 p.m. on Thursday night. CPS could do so much better, but refuses. Stay strong. Stay united. Raise your fighting voices even louder. Watch for updates . 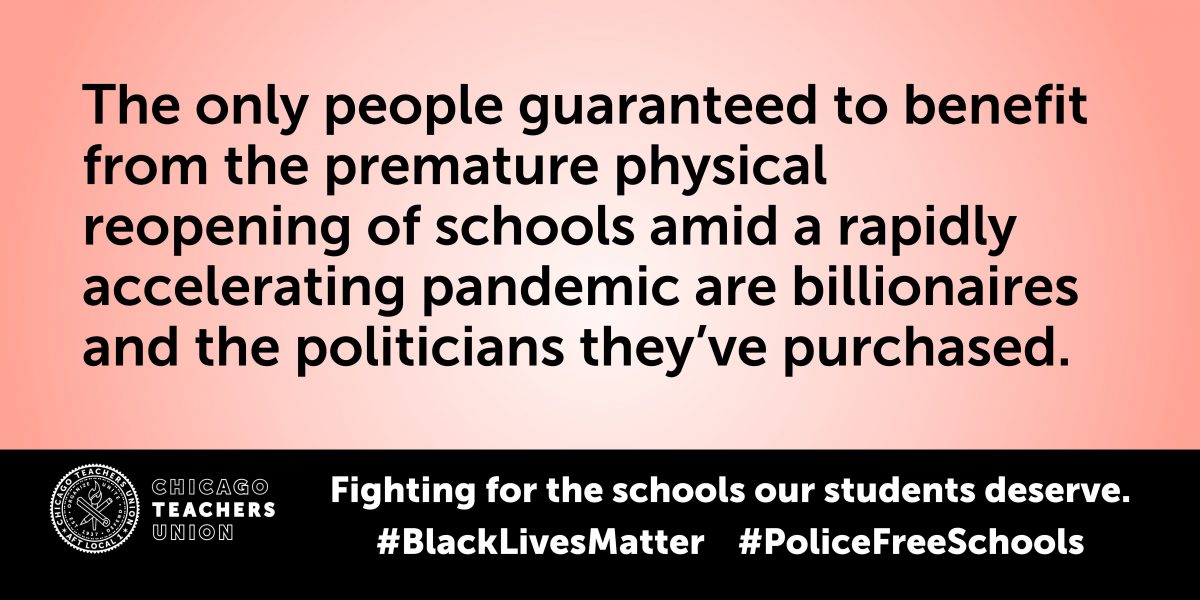 Safety dictates that schools must open remotely this fall

Mayor’s hybrid school plan falls short on safety for CPS’ overwhelmingly Black and Brown students, whose neighborhoods have borne brunt of COVID-19 deaths as August evictions loom and parents are being unsafely pushed back into workforce. 9:00 a.m. Car...

CHICAGO – Records show that over the past three years, Rep. Christian Mitchell (26th District) has accepted $47,000 from an anti-pension SuperPAC. These political contributions were funded by a small group of Chicago’s wealthiest families, several of whom are prominent Republican donors. The South Side Democrat faces community leader and education activist Jhatayn “Jay” Travis in a heated March 18 primary race.

“I find it absolutely shocking that one of our elected officials would allow himself to be influenced by special-interest money from big business as he aligns himself with progressives,” said Karen Lewis, president of the Chicago Teachers Union. “That Christian Mitchell would accept nearly $50,000 in donations from the far right, and then break his promise to Chicagoans to protect their retirements is not just disappointing, but heartbreaking.”

In 2012, the We Mean Business PAC raised over $371,600 from a small group of Chicago-based millionaire businessmen, including Lester Crown and Republican mega-donor Craig Duchossois, for the purpose of pushing pension cuts in Springfield. During that year, the group donated over $185,000 to state legislative candidates, all of which went to Republican candidates with the exceptions of Rep. Elaine Nekritz and Rep. Mitchell, the two Democratic architects of the pension cuts.

Curiously, Mitchell had stated in early 2012 that he would oppose legislation that would cut teachers’ and other public servants’ pensions. Whether his connection to the We Mean Business PAC had any impact on his legislative decision-making has yet to be established.

In 2012, Christian Mitchell received $20,000 from the We Mean Business PAC, which is closely aligned with Republican state legislative candidates and anti-pension special interests:

We Mean Business, which was created on December 19, 2011 to back Illinois pension reform, dropped $10,000 into McSweeney’s campaign on September 5 following another $10,000 contribution on June 18.

The PAC had unsuccessfully backed McSweeney’s opponent, appointed State Rep. Kent Gaffney (R-Barrington), a moderate Republican, like Beaubien and her late husband, in the March primary.

“Although everyone has officially fallen in line to endorse McSweeney, there are plenty in the GOP, including lawmakers, who would like to see Dee take him out, given how he smeared Kent and House staff in the primary,” said one Republican source.

In its first six months, We Mean Business has raised $371,600 from a small group of wealthy Chicago-area donors. The Crown family and its top employees have contributed $150,000. Another leading Chicago philanthropic family, the Pritzkers, have donated $30,000, of which $20,000 came liberal Democratic activists J.B. Pritzker and his wife, M.K. Pritzker.

“The group, which has received no coverage that I’m aware of except for a brief mention in Capitol Fax, potentially is a game-changer,” wrote Crain’s Chicago political columnist Greg Hinz in January.

The group has so far donated $185,000 to a handful of state legislative candidates. All but $30,000 of that amount has gone to Republicans. The Democratic exceptions are Suburban State Rep. Elaine Nekritz who has snagged $10,000 and Chicago state representative candidate Cristian Mitchell who has received $20,000. Nekritz is the public face of pension reform for House Democrats.

Lester Crown donated $10,000 to the We Mean Business PAC. “Lester Crown and family, whose many business interests have included stakes in General Dynamics, the Empire State Building, the New York Yankees and the Chicago Bulls, gave $31,000, including $10,000 to the We Mean Business PAC aimed at promoting public pension reform in Illinois and $5,000 to the campaign of Illinois House Republican Leader Tom Cross of Oswego.” [Chicago Daily Herald, April 30, 2012]