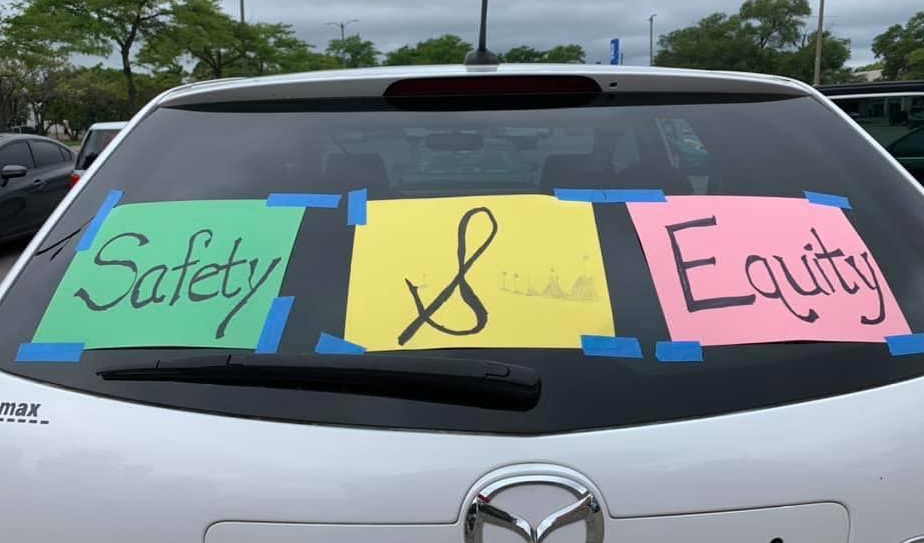 Children who do not have access to health care, who are hungry, who are fearful of violence in their communities, who do not have books or access to other informal learning at home, whose parents have limited education, and whose families are constantly stressed by economic problems are at an extreme academic disadvantage. These factors are highly related not only to testing outcomes, academic achievement, future education and socio‐economic success, but also to the racial, ethnic and class origins of individuals.

The inequitable history of American society, politics, institutions and economic relations are at the root of these outcomes. As a result, when academic outcomes are averaged across subgroups such as race and class, glaring gaps appear.

“These issues are the things that are important to our families, not performance on standardized tests,” said CTU President Karen GJ Lewis. “I think it’s important for us to go on record about this because we are likely to start seeing a more active anti-testing movement in Chicago.”

“The U.S. has gone far overboard in the overuse and misuse of standardized tests,” said Monty Neill, Ed.D., Executive Director of the National Center for Fair & Open Testing (FairTest). “Now, teachers, parents and community activists are pushing back in places like Chicago and Seattle and even in Texas, where the testing craze began.”

Teachers at Garfield High School in Seattle are currently boycotting the district-mandated Measures of Academic Progress (MAP) standardized test. A group of teachers at Curie Metropolitan High School in Chicago successfully boycotted and ended a district-mandated test a year ago. Teachers, parents and students throughout Chicago and the U.S. have serious concerns about a number of aspects of standardized testing, including cultural bias, the disruption of early childhood learning and day-to-day classroom routines, and the lack of accommodations for special needs students.

“We see all these actions around the country, from resolutions to strikes to other kind of protests as linked to the loosely-knit resistance of people saying, ‘Enough is enough,’” Neill said. “It’s time to get back to real teaching and learning.”

CTU Vice President Jesse Sharkey and his wife, Julie Fain, have delivered a formal letter (full text below) to the principal of their sons’ school exercising their right as parents to opt their children out of all non-state mandated tests for the current school year.  In correspondence to Dr. Joenile Albert-Reese, principal of Chicago Public Schools’ (CPS) AN Pritzker School, Sharkey and Fain declared that testing is not in the best interests of their children’s education, and will no longer allow them to participate.

“I’m a CTU officer, but before that, I’m the father of two school-age children and to that end, I’m against the misuse of standardized tests and support the efforts of teachers, school administrators and other parents to resist the standardized testing insanity,” Sharkey said.

We are writing to inform you that we are exercising our right to exempt our children, Leo Sharkey and Caleb Sharkey from all non-state mandated tests for the current school year. This includes, but is not limited to: NWEA/MAP, REACH, DIBELS, and mCLASS. We will permit Caleb to take the ISAT. In addition, please do not place the grades, ISAT scores, or results of previous standardized tests of either of our children on display in the classroom, hallway, or other public place.

During whole class standardized testing we understand that our children will be provided with appropriate accommodations in order to engage in quiet, self-guided activity like silent reading, drawing, writing, or other appropriate activities so as to not disrupt the classroom in any way.

We do not take this decision lightly given the high stakes attached to performance on these tests for everyone involved-our children, our school, and our teachers. Unfortunately we do not believe these tests to be in the best interests of our children's education and cannot continue to allow them to participate.

We have become alarmed at the incredible increase in high stakes standardized testing at CPS. This year our kindergartener is scheduled to take fourteen standardized tests. Our fourth grader is scheduled for twenty-four tests, including the ISAT, which is spread over 8 sessions, and REACH assessments in PE, library, music and Spanish. It's simply too much, and too much of a drain on scarce resources at our schools.

These tests carry significant consequences for students, teachers and schools, and we see the effects of this. The curriculum becomes narrowed to cover what is on the tests. Teachers and students become stressed and demoralized. Ceaseless testing is driving out creativity, curiosity, and independent thinking.

We note that elite private schools have no use for standardized tests of any kind. They trust their teachers to assess students' progress with authentic, multiple measures and intense attention given to each student. We are concerned that CPS is going in the opposite direction-towards larger classes with more standardized testing.  We also do not support a competitive culture around testing where prizes are given for results or students' scores are posted in public (a clear violation of their privacy).

We look forward to the time when our schools can nurture the natural inquisitiveness and love of learning all children should have instead of seeing them as data points on charts and spreadsheets. We are proud, grateful members of the Pritzker community. We look forward to many years of working together to improve our children's education.

We are happy to discuss this matter further.