As health officials raise alarm about rising COVID rates, CPS students in charter schools could be denied access to critical safety and mitigation tool unless District reverses course. CHICAGO — Surveillance testing is an essential tool to monitor the current state of...

Charter headlines for the week of March 8, 2021

After two-days of direct action, Passages Charter School members won a reopening agreement that meets their demands on all outstanding issues. CTU-ACTS leaders met recently to strategize a coordinated bargaining campaign. Members at Namaste ratified their back-to-work agreement and Latino Youth members marked their 29th week of refusing the boss’ back to in-person work order.

Charter headlines for the week of Nov. 9

Namaste is the latest charter school to experience a COVID-19 outbreak. After months of negotiations, and a request for a mediator, we are seeing progress in CICS-Civitas talks. Instituto Health and Science Career Academy is hiring a psychologist to comply with the CTU contract. Three laid off special education apprentices have been recalled at Acero, after members organized against the layoffs. 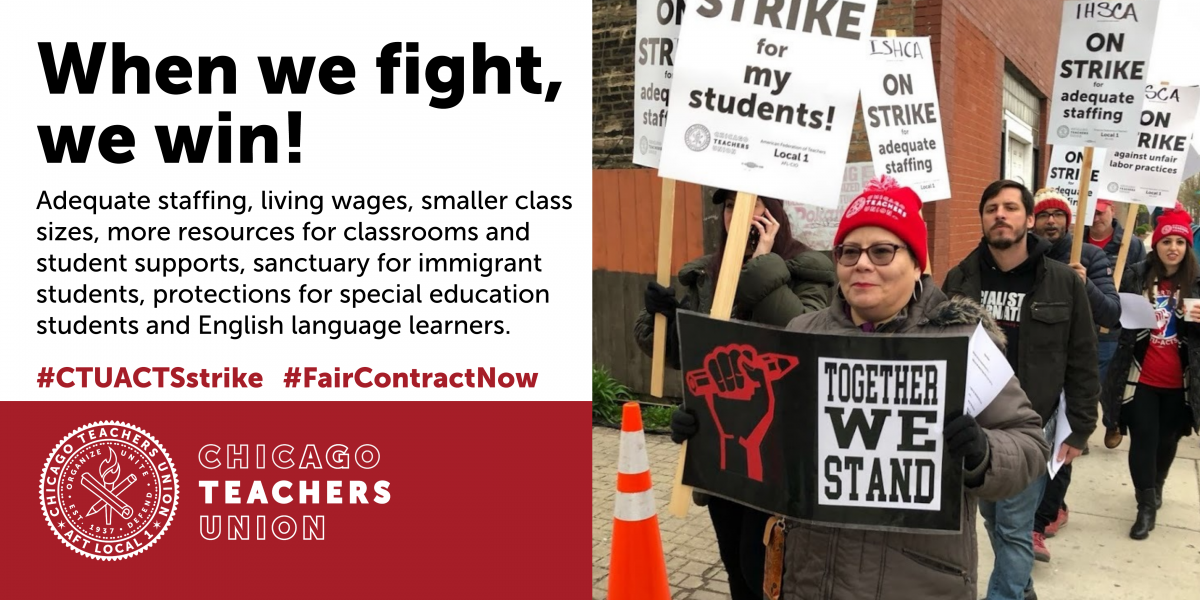 Why is there a new teacher evaluation plan?

The State of Illinois passed the Performance Evaluation Reform Act (PERA) in January, 2010, to get Race to the Top funds. They did not get the funds, but the law stands.

What is the philosophy behind the push for teacher evaluation?

The corporate reformers who push teacher evaluation as the new “solution” to the problem of low student achievement ignore the fact that at least 75% of differences in achievement can be explained by non-school factors. Teachers, while important, still account for less than half of the school components, or about 10% overall. Instead of working on the factors that account for 90% of the achievement differences, such as health, poverty, mobility, segregation, and poorly-run schools, legislation is focused narrowly on teacher evaluation. Further, by making student growth a significant factor in teacher evaluation, the corporate reformers are continuing the failed policies of the test-based No Child Left Behind. More emphasis on testing leads to less conceptual understanding, independent thinking, and creativity. The new teacher evaluation policies are bad for students and bad for education.

What are the main features of the Performance Evaluation Review Act (PERA)?

Student growth must be a significant part of teacher and principal evaluation. Every evaluator must pass a state training. There will be four performance ratings: Excellent, Proficient, Needs Improvement, and Unsatisfactory. All school districts must implement PERA-based teacher evaluation by 2016. Some must do so earlier, with Chicago being the earliest: September, 2012 for at least 300 schools.

How are the details of the evaluation plan determined?

In Chicago, CPS and CTU had 90 days to meet and discuss the evaluation plan. If they did not agree, then the “last best offer” of CPS would be the plan. In the rest of the state, unions and districts have 180 days and if they don’t agree, will have to default to a state model plan.

What has been the result of negotiations on the teacher evaluation plan?

The negotiations concluded March 29, 2012. The law gives CPS the right to implement their “last best offer”, which is explained in other Questions. However, we were able to push CPS on several issues. We feel that our participation in the negotiations helped create a plan that is better for teachers than what CPS initially proposed. For example: