First strike of a charter operator in U.S. history comes as management discloses it’s flush with cash on final day of bargaining—but refuses raise for paraprofessionals equal to cost of living increase.

CHICAGO, Dec. 4—CTU teachers, paraprofessionals and support staff at 15 charter schools run by the UNO/Acero charter network broke off bargaining tonight at shortly after midnight, December 4—the date that CTU educators had set to strike the operator if no progress was made at the bargaining table. The strike is the first against a charter operator in U.S. history.

Teachers and paraprofessionals say they have failed to move management on critical issues that range from class size to the desperate need for more special education staff.

Management has been denying resources from its schools, and ended 2018 spending $1 million LESS in staff salary costs for program services than in 2017, according to an audit that management provided Friday morning—months after educators first began asking for it. As of June 2018, ACERO had $24 million in unrestricted cash in its accounts, plus a separate reserve of $4 million in cash as part of its requirements to its bond holders.

Yet they remain unwilling to provide a penny more in compensation to paraprofessionals, their lowest wage workers. Management has also refused to move on a host of other critical issues that would improve the quality of education for students and reduce staff turnover rates, which are currently averaging over 30% in a two-year cycle.

“Management had the power to settle a contract tonight—and instead they offered us more of the status quo that has plagued the charter industry for years,” said CTU President Jesse Sharkey, who caucused with bargaining team members tonight. “We will be on the picket line until they come back with an offer that respects our students and the people who educate them.”

Overall, ACERO’s cash position increased by $10.6 million in just one fiscal year—yet they have said that they cannot give paraprofessionals ANY wage increase—even an increase that allows their wages to keep pace with inflation. Management also tendered a salary ‘increase’ for teachers so paltry that CTU members describe it as laughable. That move, say bargaining team members, was designed to pit teachers against paraprofessionals—a strategy educators reject.

“Our paraprofessionals are the backbone of our school communities, from teaching assistants and school clerks to IT workers,” said 5th grade teacher Martha Baumgarten. “What they are ‘offering’ isn’t an offer, it’s a slap in the face.”

Management and the CTU bargaining team remain far apart on other critical issues. Management has refused to budge on class size, currently set at 32 students per class—four more than what CPS seeks to meet at district-run schools. CTU members say that is both outrageous and unsafe for students, particularly children in kindergarten through second grade, where one adult simply does not have the capacity to safely supervise, let alone educate, 32 young children.

Management continues to refuse to include language in the contract that would provide assurances that management would follow federal law in providing special education services to students, where staffing is at critically short levels.

And management has refused to include a commitment in the contract to ensure that it operates its schools as sanctuary schools, a virtually no-cost commitment that would provide protections for the schools’ overwelmingly Latinx students and families.

Management has also refused to provide educators with more lesson planning time, extend the lunch ‘hour’ to a paltry 40 minutes, or concede any reduction in educators’ current workday and work year, even though UNO/Acero educators work hundreds of additional hours per year compared to educators in CPS-run district schools. Overall, Acero teachers and paraprofessionals log 20% more work than CPS educators

CTU members have also asked for wrap-around services for students and for school nurses to administer medication, both proposals which management has rejected. Educators say that every effort they’ve attempted to ensure that schools have nurses has been rebuffed.

After the 2017 state funding change that sent over $38 million in additional funding to all CPS charter schools, ACERO saw a leap in its budget picture, its 2018 audit shows. ACERO closed out 2018 with over $89 million from CPS revenue sources, a 10% bump from the $81.6 million they received in 2017. But rather than investing that windfall in the classroom, ACERO chose to stockpile cash, and slash expenditures and resources to its schools and students.

Acero, like all Chicago charter operators, collects 8% more per student in funding than CPS schools. UNO/Acero CEO Richard Rodriguez collects more per year in compensation than CPS CEO Janice Jackson, while overseeing just under 8,000 students at 15 schools. Jackson oversees more than 500 schools with over 350,000 students. 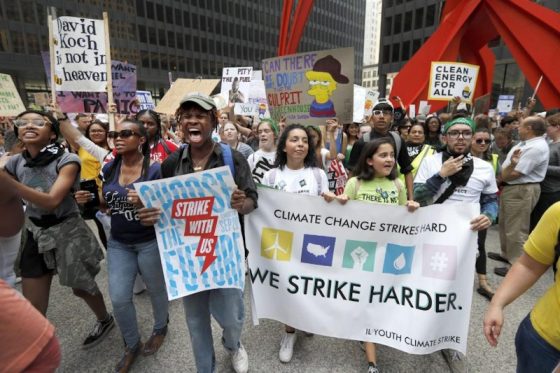