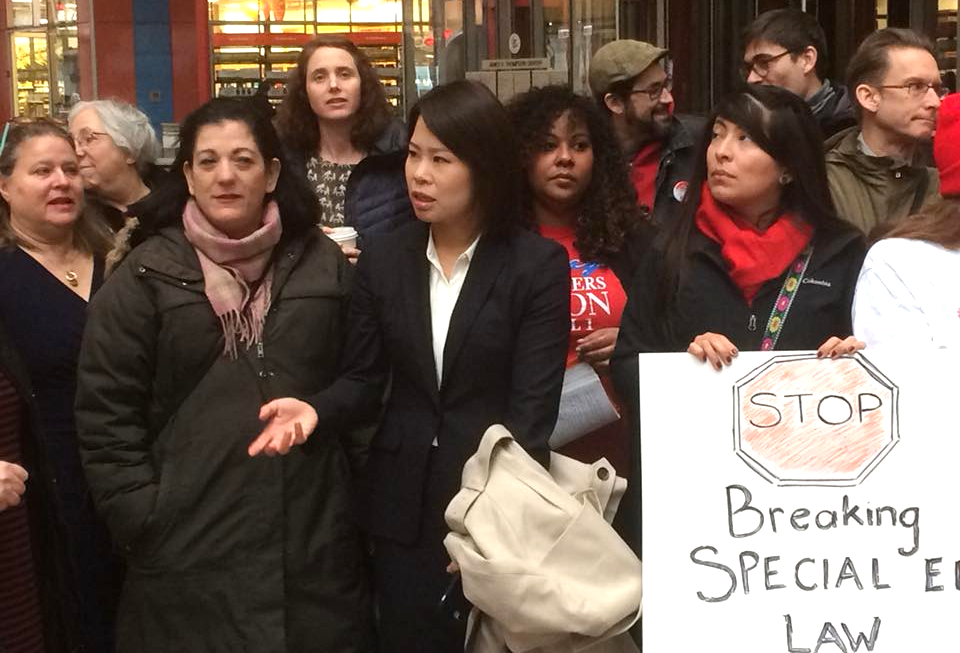 CHICAGO, April 18, 2018: Chicago Mayor Rahm Emanuel’s hand-picked school executives denied special education services to thousands of students, according the Illinois State Board of Education, which announced its findings at a public hearing today based on months of testimony and evidence-gathering from teachers, parents, clinicians and advocates.

“ISBE’s bombshell findings affirm what our rank and file members have been documenting about this disaster for two years,” said CTU Vice President Jesse Sharkey. “Thanks to the excellent investigative work of local reporters, we know that the motivation behind CPS’ changes to special education policy was based on one overarching goal: to cut costs, no matter how catastrophic the consequences for our students. The evidence is damning and overwhelming – and clearly demonstrates once again that this mayor and his minions are unfit to serve as the bosses of this school system.”

Disgraced former CPS CEO Forrest Claypool paid politically connected contractors $14 million – roughly half of the $29 million in cuts that he made to special education during the same period – to do work that included rewriting policies and retooling the process by which parents and educators seek SPED services for students in need. Claypool’s SPED cuts dovetailed with hundreds of millions of dollars in budget cuts in the last six years that have driven staff shortfalls — including of social workers, teaching assistants, clinicians and school nurses who play central roles in the provision of special education services.

Emanuel tapped Claypool, one of his closest political allies, to run CPS after the previous CEO was forced out in the wake of a multi-million dollar contract kickback scheme – and Claypool defended his new SPED policies virtually until the day he, too, was forced out for ethics failings.

Claypool’s scheme resulted in the deployment of draconian and byzantine new procedures that delayed and denied services for thousands of public schoolchildren in need, according to ISBE findings and testimony and evidence from teachers, clinicians, parents and advocates.

“These findings are a victory for special education students,” said Sharkey, who argues that the data ISBE gathered represents the tip of the iceberg. “Some educators and parents couldn’t make the hearings, and others were, frankly, intimidated about testifying out of fear of retaliation on the job or against their children. ISBE’s recommendations move us in the right direction, but we will have to continue our fight to win all of the improvements that CPS students deserve.”

Teachers, school nurses, clinicians and parents joined allies that include Access Living, Equip for Equality, the Ounce of Prevention Fund, Parents 4 Teachers, Raise Your Hand and the Shriver Center on Poverty Law, as well as disability rights attorney Matt Cohen, to expose failings in Emanuel’s SPED policies. Now advocates will need to keep the pressure on CPS to ensure that students get the services – and the justice – they deserve. The CTU charges that next steps must include removing Emanuel’s control over CPS’ top executives and rubber stamp board, which the mayor also appoints.

“We need accountability, transparency and responsible oversight of our public schools – and that only comes with democratic control of the school board,” said Sharkey. “It’s high time we ended the mayor’s disastrous control of our schools and his willful criminal indifference to the well-being of our students, by giving Chicagoans what our residents have demanded for years: an elected, representative school board.”

The Chicago Teachers Union represents nearly 25,000 teachers and educational support personnel working in schools funded by City of Chicago School District 299, and by extension, the nearly 400,000 students and families they serve. The CTU is an affiliate of the American Federation of Teachers and the Illinois Federation of Teachers and is the third-largest teachers local in the United States. For more information, please visit the CTU website at www.ctunet.com.