We’ve been raising the alarm for months that Mayor Lightfoot’s CPS team was bungling this fall’s reopening plan and, at Tuesday’s bargaining session, they tacitly admitted we’re right. They developed the mayor’s “plan” — focused on getting bodies in seats instead of on safety — in May, before the Delta variant took hold. And they have been unwilling to adjust it to the pandemic’s new reality ever since. 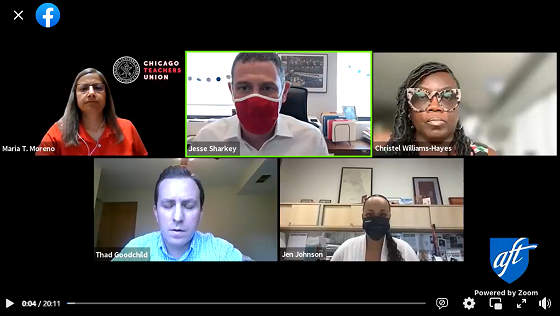 Tuesday the mayor claimed again that schools are safe because of protocols WE won last spring, and that CPS is addressing parents concerns about issues like their totally inaccurate COVID tracker and a chronic shortage of contact tracers. Yet earlier Tuesday afternoon, the mayor’s bargaining team admitted to us that their plans for testing and contact tracing are a shambles and being ‘reorganized’ while CPS tries to double the number of contact tracers. Click on the image to watch our full Tuesday video update.

The mayor, put bluntly, has yet to make good on her empty and unfulfilled promises of real safety for our members and our students.

For example, CPS promised its contact tracing team would react in 48 hours to prevent COVID spread in schools. Yet we’re hearing of cases where CPS has failed to notify impacted school community members more than a week after exposure — long after they could safely quarantine.

Yesterday, the mayor’s team acknowledged the program’s failure by announcing CPS would be hiring an additional 28 contact tracers, on top of the 22 already in place. We’ve been pointing out the delays in notifications since day one, but it has taken CPS three weeks to do an about face. Who knows how many infections might have been prevented if they had listened to the people who know our schools best.

The same goes for the mayor’s failed testing program. CPS promised the public that testing would be up and running in every school by September 15 — more than two weeks after school started. Today, the mayor’s team admitted not only that they will not roll out district-wide testing on Wednesday, but that they cannot definitively say when they will be testing in all schools. Instead, CPS today is testing barely a third of our schools each week and have administered only 638 tests out of some 400,000 students and staff.

To put that appalling failure in perspective, students in Los Angeles cannot attend school unless they submit to weekly testing. CPS will only test students if parents give written consent and, by the third week of school, had collected a meager 9,000 consent forms, just barely 3 percent of the entire student body. It’s a system designed to fail.

CPS also has announced it is hiring retired nurses to input vaccination status, an admission that the current staff can’t keep up. Obviously, this calls into question the accuracy of the data and the soundness of the district’s policy of only requiring quarantines for the unvaccinated. It’s a ridiculous policy on its face made even more incredible when you can’t trust the data.

We also learned yesterday that CPS has been misleading our school communities about its remote learning policy. The district claims principles have authority to flip to remote learning due to COVID outbreaks. But the guidance, which we saw for the first time Tuesday, says very clearly that a switch to remote instruction is not required, regardless of how many students or classrooms may be quarantined.

While the mayor’s team admitted what we’ve been saying all along — they’ve made a mess of this year’s reopening, they can provide no answers as to when they’ll begin to clean up the mess. When will the new contact tracers be in place? When will a real testing program be up and running? When will we be able to trust data coming out of CPS? When will school-based vaccination programs be shared with students and families?

As usual, no answers, even as the mayor moves to appoint a new CEO today.

Let’s be clear. We take no joy in this implicit admission of failure. Our members have been holding their schools together, under unbearable conditions, doing what they do best, educating, leading and advocating for their students. But we need these problems fixed yesterday — the safety of our members, our students, their families and our school communities depend on it.

On Sunday, we’ll be holding an important All-Member TeleTown Hall to provide a fuller update, answer your questions, and strategize ways to escalate our actions to win the safety that our members, our students and our school communities deserve.