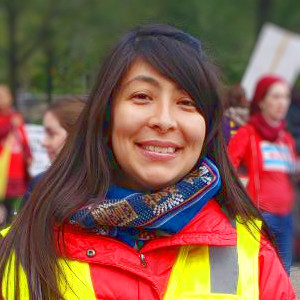 CTU Organizer Linda Perales has wanted to be a teacher since first grade. “I always loved writing on the chalkboard,” she laughed. “Of course, by the time I became a teacher we were all using white boards!”

But, back then, she never dreamed that, one day, as a teacher, she would be forced to work outside, in sub-zero temperatures and blowing snow, to protect herself, her colleagues and their school community from COVID.

“That was a hard fight,” Perales said, referring to the first fight for a safe reopening in 2020-2021 with Mayor Lori Lightfoot. Perales and other CTU members refused to return to in-person work until the mayor implemented critical COVID safety measures. “No one wanted to be standing outside in the freezing cold, but we knew we were fighting, literally, for the lives of our members, our students and their families.”

A Chicago native, Perales is used to brutal winters. But she was not prepared for the inequities in CPS and the constant battles she and her union siblings have faced during the entirety of her teaching career.

“It’s so unfair that our students are in crumbling classrooms, with outdated textbooks, a lack of resources and staff — and that has become the norm,” she said. “It’s not fair that we regularly have shootings outside our schools or that our special education students or bilingual students aren’t getting the services they are legally entitled to. Our students deserve the best of everything and more.”

Born and raised in Chicago’s Gage Park neighborhood, Perales attended Sawyer Elementary and Curie High School. She then went on to the University of Illinois at Urbana-Champaign, becoming the first person in her family to attend college.

After earning a degree in sociology, with a minor in Latino/a studies, she began working at Universidad Popular, a non-profit in Little Village where she taught adult English classes and worked with youth in an after-school program. Those experiences affirmed her desire to become a teacher and, in 2013, she earned her master’s degree in general and special education at DePaul University and set off for Chicago Public Schools.

“I’ve always known that my passion was for education,” she said. “And I knew I wanted to teach in Little Village. That’s where my heart is. A neighborhood so full of love, traditions, resiliency, delicious food, and incredible youth and parents.”

Perales began as a special education teacher at Corkery Elementary, in the Little Village neighborhood she loves.

“Teaching was beautiful and hard,” she said. “I would have been completely lost if it had not been for my SECAs, for my students and their parents, and for the CTU Latinx Caucus. All of these gave me beautiful relationships and knowledge that allowed me to advocate for what our students needed, what I needed and what our communities still need.”

Perales said when she first started teaching, she didn’t know much about the CTU. She signed her union card and paid her dues, but was not involved in any union activities. That all changed when fellow organizer Rebecca Martinez came to her school in search of a Corkery member to serve as delegate.

Perales stepped up and began attending the monthly House of Delegates meetings and the Latinx Caucus meetings that were held right after the HOD.

“It felt great to meet other Latinx educators who were passionate about issues that impact our Latinx students and teachers,” she recalled. Perales has been a fixture in the caucus ever since, helping to organize union events and actions that lift up bilingual educators and their students’ needs.

She joined the 2017 Summer Organizing Institute and later that summer went on a solidarity trip to Chile. After that, she became a district organizer, a CTU executive board member and bilingual committee member.

During the historic 2019 strike, she helped write contract proposals that led to historic wins for our schools, including contract articles that enshrine bilingual education and sanctuary language in the CTU/CPS collective bargaining agreement for the first time. Perales is particularly proud of that accomplishment.

A year ago, she joined the CTU staff as an organizer. In the first week on the job, she was a part of two big actions, par for the course in the life of CTU organizers.

Perales said she loves organizing but definitely misses the classroom.

“To be honest, it was a difficult decision to leave the classroom because I love teaching so much,” she said. “But this felt like an opportunity to learn more, to grow more, to help continue to push forward issues of bilingual education and sanctuary and to help other members do the same. You can’t ask for more than that.”