Yesterday, I visited the new Englewood STEM High School, which was part of the close-four-high-schools-open-one-high-school deal brokered in 2017 by Rahm Emanuel’s handpicked Chicago Board of Education (not to be confused with the current mayor’s unelected Board of Education) over significant community opposition.

As I drove toward the school, I saw bleachers, a football field, track and a modern structure that houses more than 400 freshman students. It is a gorgeous campus, although I couldn’t help but wonder where all of the sophomores, juniors and seniors who live in Englewood attend school, especially amidst the ongoing battle to properly support one neighborhood high school (Harper) and as Chicago Public Schools proposes the closure of another (Hope).

But again, Englewood STEM is beautiful—bright, clean and with courteous and attentive staff who gave me a warm welcome. My first impression was a good one, but I had one pressing question: Why were there so few students in the school after dismissal? I recently visited Back of the Yards College Prep after a day of classes, and was literally stepping over students as I entered its doors. There were kids everywhere, doing kid things, in the most positive ways. During a morning visit to Jones College Prep, students were all over the place—on computers, lounging in hallways and chairs, listening to music and basically owning their space. These places weren’t just schools, but an extension of home.

See, I often evaluate high schools based on the number of students who comfortably remain after school. This lets me know how welcoming a school is (or isn’t). It’s not a scientific process, but if CPS can have its racist SQRP metrics, I can surely have anti-racist metrics of my own.

I met with a vibrant and cohesive group of educators at Englewood STEM who have opened a new school community and walked a picket line, all in one semester. Their commitment to our collective struggle for equity and justice is clearly unmatched, yet they are experiencing many growing pains with an administration that seems ambivalent, combative, in over its head, or all of the above.

I spoke with a history teacher whose students don’t have books or tech-assisted curriculum. As a result, the history department is creating curriculum on the fly during the school year, even though creating curriculum is a before-the-school-year-begins type of activity. The teacher has engaged administrators about this challenge, only to be told during their pre-evaluation observation things like, “Chin up! You can do it! I did it before. Doing more with less is part of the job!”

Situations like this may explain why a school in its nascent stages already has two grievances and an arbitration. Why? Because administrators require educators to work extra hours without pay, meaning teachers and staff are required to stay late, forgo lunch and give up prep periods (yes, those prep periods again), which is a violation of our collective bargaining agreement with the Board of Ed.

As we continued to talk, I found out that the school has “community” assemblies where students are expected to stand for more than an hour to show discipline and respect. Not sure why this is needed in a gym with ample bleacher seating space. One of the more bothersome moments for me, however, was listening to the first-year teacher who held back tears recounting the bullying they are experiencing. This individual has started a new career, in a brand new school, went on strike, lost a loved one and is now being bullied by a school leader—all in the first semester.

Other educators talked about uneven heating and cooling concerns. Some rooms are arctic, while others are tropical, but instead of that being the issue, it’s devolved into squabbles over students and staff doing whatever is necessary to keep warm in their classrooms. Administrators are coming into learning spaces and counting the number of students in hoodies and coats, but history curriculum can’t receive the same level of attention?

On a brighter note, the school hired a social worker yesterday. It’s unclear, however, if the social worker is for all five days a week or if there is a co-share with other schools. This matters.

Englewood STEM teachers and staff are also desperate for restorative justice work, but as is the case in many schools, programs are not fully operational and consistency is needed with how discipline is applied throughout the school community. The school also has students who desire access to counseling and therapy services.

In the end, I found a group of tremendously dedicated educators who want to be partners in their school’s growth, but instead, they’re being bullied and taken advantage of. I’m encouraged, however, because they refuse to give up, and that is a testament to their strength. They’re organizing for the school community their students and students’ families deserve.

And their union has their back. 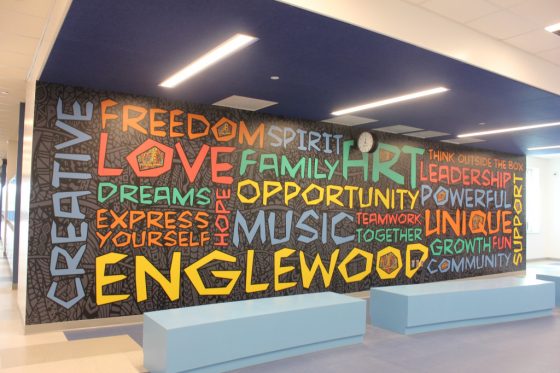