MENUMENU
Home > Posts > Save our Clerks 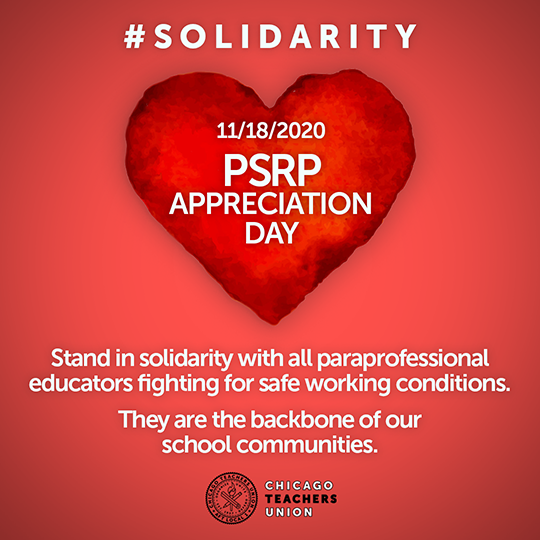 The State of Illinois has established the third Wednesday of November as an annual day to honor the paraprofessional educators who are the backbone of school communities across the state and across the city of Chicago.

It appears safe to say, however, that Mayor Lightfoot and the CPS Board didn’t get the memo.

Instead of honoring PSRPs’ right to a safe workplace, Lightfoot and the Board are defying an arbitrator’s ruling as well as the mayor’s own public health guidance to compel these PSRPs to work in unsafe buildings when they could be working remotely.

The CTU has launched a campaign to support clerks, tech coordinators, and other PSRPs in their fight to secure safe working conditions. Here’s how you can show your solidarity:

Call 311 and report CPS for compelling employees to work in unsafe conditions.

The mayor has set up 311 as a hotline to report unsafe work conditions during the pandemic. Here’s some suggested language you can use when you call. And remember, every call supports the clerks and tech cos, but these calls also defend the right of all CTU members to a safe workplace. After you call 311, let your delegate know so they can keep track of this campaign.

2) Make a statement together

Sign a letter to your school’s alderman with signatures from everyone in the school pledging to stand with the just demands of clerks, tech cos, and other PSRPs.

Your delegate is already working on the letter, so contact them today about adding your name!

The CTU has launched a GoFundMe campaign to support PSRPs so they can collectively enforce the arbitrator’s ruling, since CPS has pledged to dock the pay of PSRPs exercising their legitimate right to work from home. If you are able, make a donation today to show your support!
Save Our Clerks GoFundMe

Let the PSRPs at your school know you support them. Write them a note, share the graphic in this email on social media. Help publicize the injustice that the mayor and her handpicked board are inflicting on these predominantly Black and Brown women workers.

“An injustice to one is an injustice to all, and there’s no shortage of injustice that these women have suffered in our society,” CTU President Jesse Sharkey said. “CPS is already making threats, and we have to fight for both their lives and their livelihoods, while also defending their rights.”

“We can disagree ideologically, but the arbitrator has put forth a legally binding decision, and while CPS and the mayor threaten, and dither, people have to live their lives,” said CTU Vice President Stacy Davis Gates said. “They have bills to pay and ends to meet, and we’re going to help them as much as we can through this difficult time.”