MENUMENU
Home > Posts > Our contract has now expired. Our fight for educational justice is heating up.

Our contract has now expired. Our fight for educational justice is heating up.

In 63 days, our students return to school—yet as of midnight Sunday, tens of thousands of their educators in the CTU are now officially working without a contract. Incredibly, Mayor Lori Lightfoot’s negotiating team—the same team that former mayor Rahm Emanuel used—continues to stonewall at the bargaining table on our demands to bring real educational equity to our schools and our students. We took our disappointment public today—and we may have to take our fight for equity to the picket lines this fall.

The CTU has to jump through very specific hoops in bargaining—learn more about special restrictions placed on the CTU at this link. We’ve also built a resource kit for CTU members, parents and residents that can help advance our struggle for equity in the coming weeks.

Now, with the CPS/CTU contract officially expired, all terms and conditions of mandatory subjects of bargaining remain in place legally, although CPS has a track record of ignoring those legal constraints. The last time the CTU was forced to work without a contract, the appointed board of education robbed educators of contractually agreed upon wages by failing to honor educators’ steps and lanes, implemented furlough days—another hit on workers’ wages and students’ learning—and dismantled special education.

We’re not looking for conflict, but we’re willing to do whatever is necessary, including striking, if that’s what it takes to defend our students and our schools this fall. We will not tolerate more justice delayed and denied for our students, their educators and our schools.

We’re demanding funding for basic education supports, more diversity among teachers and staff, adequate staffing for special education and bilingual education, at least one librarian and school nurse in each school, an end to a desperate shortage of social workers and counselors, restorative justice staff and trauma supports for our students, expanded in-school early childhood education, smaller class sizes, and after-school, sports, music and arts programs for our children.

Lightfoot campaigned on these issues, but her negotiating team—the same bargaining team that the previous mayor used as he furloughed school workers, laid off thousands of teachers and paraprofessionals and gutted school budgets—has ignored those equity demands. Instead, the mayor’s hand-picked board voted last week to extend SQRP, a racist school rating policy that punishes students and schools with high levels of trauma and poverty, and turns the struggles of our most needy students from from disabilities to liabilities. They’re expanding their failed privatization strategy to pre-K programming, despite evidence of high costs, poor services, worker exploitation and graft associated with CPS privatization schemes. They’ve again laid off even more low-wage PSRPs—the overwhelmingly female Black and brown teacher assistants, school clerks and other critical frontline paraprofessionals who are the backbone of school communities. These are the same workers who’ve borne the brunt of the previous regime’s layoffs, while many work two and three jobs just to survive.

The bottom line is that, contrary to the Mayor’s claims, CPS is not “bargaining in good faith“. Instead, days before she formally took office, she greased the skids to hand over billions of public TIF dollars to Lincoln Yards and the ’78’—again, carving out public giveaways for the wealthy while the tax burden continues to fall disproportionately on ordinary residents.

This mayor should be investing the public dollars we already have in our schools—instead of perpetuating the reckless old polices of the previous mayor. We’re not going to apologize for demanding an end to this assault on educators and our students’ needs.

We’re more than willing to work with the mayor on ideas to generate revenue for our school communities—including strategies to extract more from the rich who’ve benefited so generously from public handouts and tax cuts. We are NOT prepared to force our educators to live with another year of stagnant wages and lousy working conditions that hurt our students and rob our schools. If the partnership we were promised in the campaign continues to fail to materialize, it’s very simple: we will stop providing our labor.

We’re in a struggle for real equity in our schools. When we stand together and fight, we win. 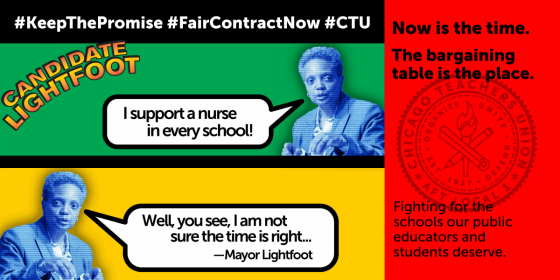