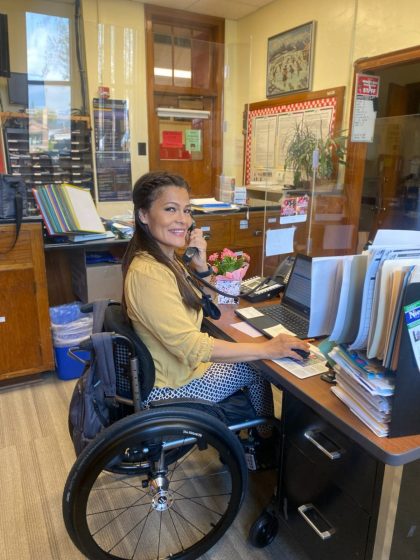 PSRP Judy Mahoney is exactly the kind of employee CPS should value: hardworking, dedicated to her school community, bilingual and a positive role model for students. She served as the school clerk at Whittier Elementary in Pilsen for 23 years until a drunk driver changed the course of her life one night.

A head on collision left Judy paralyzed from the waist down, in need of a wheelchair. It could have been a life shattering event, but Judy resolved to rebuild her life and return to the students and staff she loved. There was only one problem. Three decades after passage of the Americans With Disabilities Act, Whittier, like hundreds of CPS schools, is not wheelchair accessible.

In need of a job, in 2018, Judy accepted a position at Byrne Elementary, where her hard work and can-do spirit won over that entire school community, too. Now, four years later, CPS has slashed Judy’s position at the school and, had our Union not fought back, she would have been out of job at the end of June.

But we did fight back. That’s what a Union does, stand up against the greed and indignities of the bosses. PSRPs like Judy know a little something about that. They serve as the backbone of our schools but often don’t get the respect and appreciation they deserve. So it didn’t surprise me when I heard about the treatment Judy received from CPS.

And I most certainly wasn’t surprised when CTU’s organizing team sprang into action, demanding justice for Judy. We helped mobilize support at Whittier and Byrne and in her community. We circulated a petition signed by over 7,000 supporters. We reached out to elected officials who sent letters to CPS and the mayor demanding they fund Judy’s position. And we held press conferences and rallies that generated positive media coverage of Judy’s plight.CPS will soon receive the largest infusion of federal money in its history

People see how CTU stands up and fights back when we take to the streets during a strike. But we stand up and defend our members against injustices on a daily basis — as Judy learned.

CPS will soon receive nearly $2 billion in COVID relief funding, the largest infusion of federal money in CPS history. Yet it moaned that it couldn’t afford to pay for Judy’s position at Byrne. She tried reasoning with the district, even pleading, to no avail. Then, she reached out to her Union.

After weeks of pressure from CTU and other supporters, CPS finally agreed to fund Judy’s position — but only for another year. That’s a start but not good enough. Had Whittier been wheelchair accessible, Judy would not have been facing unemployment. If CPS funded Byrne based on what it needs, Judy’s position would be secure. And had CPS invested in real accessibility for every student, family member and worker at our schools, Judy wouldn’t need to be at rallies fighting to save her job.

Judy just wants to be afforded the security she deserves after devoting almost 30 years to CPS. That’s not too much to ask. She never wanted to make a fuss or be the center of a public campaign. But that’s what it takes to get CPS, controlled by Mayor Lightfoot, to show some decency and humanity — and to do the right thing.

At this point, Judy is exhausted but wants to keep fighting. Our Union will keep fighting, too, for her and for all the other Judy Mahoney’s out there, being callously turned away from schools simply because they are differently abled. Shame on you, CPS.

Christel William-Hayes is CTU Recording Secretary and a PSRP for life.