Mayor Lightfoot has once again interfered with CPS operations and derailed a process that was scheduled to expand our paid parental leave rights by a factor of 6, from 2 weeks to 12, come January 25th. 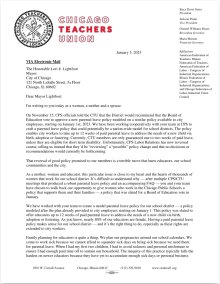 Mayor Lightfoot has once again interfered with CPS operations and derailed a process that was scheduled to expand our paid parental leave rights by a factor of 6, from 2 weeks to 12, come January 25th. I sent this letter to the mayor today urging her to reverse course and allow her CPS team to continue to work collaboratively with us — as they have been since mid-November — to deploy paid family leave policy for CPS employees that mirrors the 12 weeks of paid parental leave she’s now allowing to City employees, as of January 1.

This reversal of CPS’ November commitment to provide our rank and file with the same expanded parental leave benefits afforded to City workers is one more disappointing but unsurprising intervention by the mayor in good policy and humane treatment of school workers across the city.

CTU members on our health care committee have expressed our anger and disappointment, saying that — unless the mayor swiftly follows through on expanding the benefit to teachers — we will bring our objections directly to City Hall and the public at the next City Council meeting on January 18.

Only the Mayor could have approved this sudden policy change. To verify the interference, we’ve filed a Freedom of Information Act request to obtain all communication between Lightfoot’s office and CPS on this matter.

This about-face is part of a long-standing pattern of behavior by Lightfoot to attack union educators. Nearly 80 percent of us are women — and ALL CPS employees deserve access to this paid family leave. The majority of the developed world already offers 12 week parental leave as a recognition of this fundamental human right. The mayor and her CPS administrators are now delaying and denying benefits to CPS employees that were just granted to other city workers.

This is part of the mayor’s playbook to anyone that challenges her: rejection, retaliation and denial of equal rights. For the last four years, we’ve had to fight tooth and nail for our rights and needs, lobbying legislators and even striking for basic provisions in our labor agreements — a pattern that we can expect to continue should Lightfoot win a second term.

We’re ratcheting up public pressure around Lightfoot’s back-pedaling, first by demonstrating our unity with the petition below demanding that she restore the promised benefits. We’ll deliver the signed petitions at a press conference on January 18 at the City Council meeting to expose this double standard.