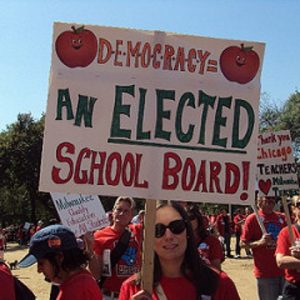 “In 2020, why should we have to fight for democracy in our schools?” Rod Wilson asked, as he kicked off a citywide campaign to pass the elected school board bill when Illinois Senators reconvene next year. “We should have the same right to elect the people who run our schools that they have in Carbondale, Centralia, Decatur or Evanston.”

But we don’t. Chicago is the only city in Illinois that, by law, cannot elect its school board. There are over 850 school districts in the state and only Chicago’s is appointed. The CTU and its allies in the Grassroots Education Movement (GEM) aim to change that.

Wilson, the executive director of the Lugenia Burns Hope Center, served as emcee for a rousing December citywide town hall that brought together a dozen GEM partner organizations and over 150 parents, teachers, students and other concerned Chicagoans. The groups are mobilizing a citywide push to pass HB 2267 in the State Senate in January.

The bill would create an elected school board, with the first election in 2023. The board would be elected from 20 representative districts, with a board president elected at large. The number of board seats is key to ensuring that all Chicago communities have representation. And, with more seats, the districts will be smaller, reducing the influence of money on school board races.

Like two bills before it, HB 2267 passed the Illinois House by a near unanimous vote in April 2019. That was just weeks before Mayor Lori Lightfoot, who had campaigned in support of an elected school board for Chicago, took office. Once in office, however, Lightfoot schemed with then Sen. President John Cullerton to derail the bill.

Cullerton, at the behest of former Chicago mayor Rahm Emanuel, had been the main roadblock to passage of legislation giving Chicago an elected school board, refusing to even call HB 2267 for a vote. But in an effort to settle last year’s historic strike, he was convinced to get out of the way and he pledged to move the bill in January of 2020. The pandemic put that legislative session on hold.

Mayor’s hybrid board a non-starter

Now, Lightfoot is lobbying senators to oppose HB 2267 and to support a “hybrid” school board instead. That formation would allow some seats to be elected, but the majority of seats would remain appointed and under the mayor’s control. That’s a non-starter for the CTU and GEM.

Jitu Brown, national director of the Journey for Justice Alliance, noted that hybrid boards are the creation of privatization forces, who want school boards to have the appearance of democracy while still being controlled by corporate political forces.

“If they don’t want you at the decision making table, they are not working in your interest,” he said.

Miracle Boyd, a student at the now-shuttered Hope High School, testified at the town hall about her experiences in front of the unelected board in 2016 fighting to save her school. “Why do we have to plead and beg to get what we deserve and they don’t even listen,” she said. “What happened to our school would never happen to schools on the North Side.”

A matter of racial justice

The decade-long fight for an elected school board is a matter of fundamental democratic rights for all Chicagoans. But, because unelected school boards are typically imposed on districts that serve largely Black and Brown students, it is also, fundamentally, a fight for racial justice. CPS’ student body is 89 percent children of color and 75 percent low income.

GEM and CTU are mounting a campaign to pass HB 2267 when lawmakers return to the Capitol after for a “lame duck” session, the closing days of the current general assembly before new legislators are seated. But the success of that campaign will depend on members contacting their state senators and insisting the bill get consideration first thing in the new year.