MENUMENU
Home > Posts > Does CPS still include coat closets in its ‘utilization’ algorithm?

Chicago Public Schools released its annual “utilization” report last week, which powerfully demonstrates how data can be manipulated and weaponized against our schools. Having experienced the record-breaking, racist closing of more than 50 schools in 2013, there is no telling what the district has planned next for our beloved school communities.

Plus, there’s some fuzzy math going on here, which isn’t unusual for CPS. For example, Gwendolyn Brooks High School is efficient when it is at 106 percent of capacity?

The space utilization formula, like many other policies and formulas CPS has devised, has changed dramatically over the decades. The formula has been reshaped to close, co-locate or build new schools based on neighborhoods that real estate developers covet. It’s much like the district’s School Quality Rating Policy (SQRP) in the sense that no educator would ever create measurements like these because they don’t really measure anything. Ever-changing formulas for utilization and school ratings aren’t designed to provide transparency or enable authentic planning, but instead, to foist racist notions of “school choice” onto our children and their families.

Real estate agents love these metrics, though, because they give them some kind of perceived insight into communities without having to physically visit them. 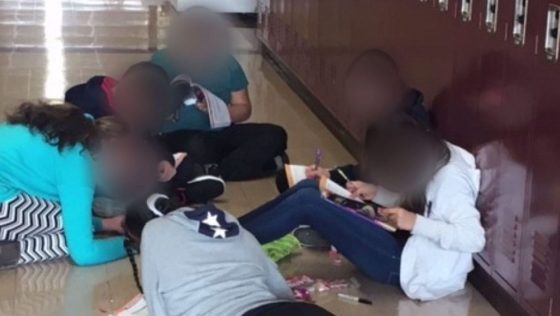 (Students at Grissom Elementary on the Southeast Side forced to study on hallway floors.)

As always, CPS chaos and instability hits Black and Brown communities the hardest. Closing 52 schools in 2013 did not fix the under-utilization crisis because CPS created the crisis itself through a reckless lack of planning that continues today. Continued devastation from the housing market crash and the oversaturation of charter and contract schools in low-income communities has contributed drastically to the thinning of students in schools on the South and West sides. As a result, Black students make up 41 percent of the student body this year, but comprise the majority of students in “underutilized” or non-rated schools.

But privately managed charter and contract schools are excluded from the space formula analysis, just as they are from accountability status ratings, and CPS continues to allow these schools to open up wherever they choose, regardless of the effect on neighboring schools. The new CPS Pre-K enrollment process has been an absolute disaster—as has GoCPS—significantly hurting enrollment in many neighborhood schools.

Add to this the city’s continuing loss of school-aged children due to the unmitigated housing crisis and neighborhoods devoid of resources, and you have a carefully planned crisis that allows the district to say that hundreds of schools are underused and justify its punitive actions.

In addition, the “utilization formula” completely disregards all of these factors:

Here is all you need to know: CPS’ misuse of data gives it some cover to make racist school facilities decisions that are really based on real estate trends. We should continue to be wary of the district’s efforts to manufacture self-serving data, just as is done with SQRP, REACH scores, VAM and so on.

If you want to look into your school’s utilization rate, check out ctulocal1.org/facilities for ideas about how to do so effectively. We know that we will need to fight for the space for smaller class sizes, wraparound services and the kind of robust programs that make our schools the foundation for healthy and vibrant communities. That’s what we fought for in October, and that’s what we will continue to fight for until we win the schools our students deserve.