Board of Education president returns to his roots as ardent defender of public education in Illinois senate.

CHICAGO—Chicago Board of Education President Miguel del Valle today joined at least 50 striking special education teachers and their allies for a press conference at Blackhawk Park Saturday afternoon, where he signed onto a pledge to “advocate for a Chicago Teachers Union contract that protects the rights of students with disabilities.”

The pledge he signed contained three key CTU contract demands that CPS and Mayor Lightfoot continued to resist at the bargaining table. The specific wording of those demands are “dedicated case managers,” “reasonable workloads that allow case managers to meet the needs of students,” and “protections for the legal rights of students with disabilities.”

Del Valle’s decision to call on Mayor Lightfoot’s bargaining team to honor these critical contract demands represents a significant breakthrough in the effort to negotiate a just contract for CPS teachers and students.

Del Valle has been a longtime supporter of the battle for equity and education justice. As a state senator, he called the 1995 legislation that stripped the rights of CTU educators to strike over class size and staffing needs the worst piece of education legislation he’d ever seen.

Before the CTU strike began, del Valle was the lone member of the CPS board of education to make an appearance at negotiations, telling rank-and-file CTU bargaining team members he supported everything they were fighting for. At that time, he also informed those educators that CPS and the board would not put Mayor Lori Lightfoot’s campaign promises for equity and educational justice in writing in an enforceable contract—the only mechanism the CTU has to hold CPS and the 5th floor to their promises.

His pledge today comes as word from the bargaining table indicates that the CPS negotiating team continues to refuse to enshrine these demands in a new contract with the CTU. 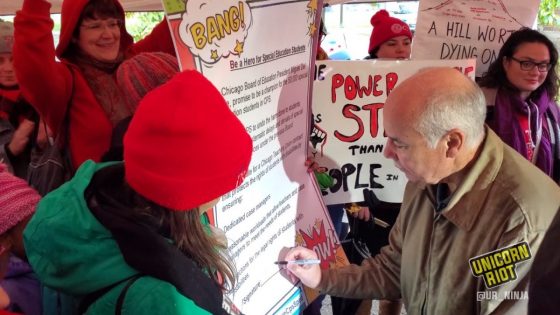 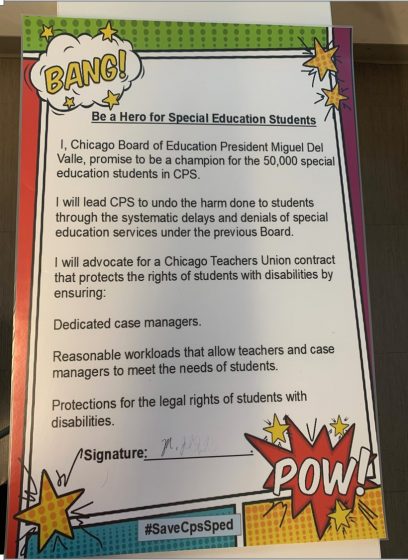 “Be a Hero for Special Education Students!

I, Chicago Board of Education President Miguel Del Valle, promise to be a champion for the 50,000 special education students in CPS. I will lead CPS to undo the harm done to students through the systematic delays and denials of special education services under the previous Board.

I will advocate for a Chicago Teachers Union contract that protects the rights of students with disabilities by ensuring: