CHICAGO—Two and a half weeks ago, on June 13, Chicago Mayor Lori Lightfoot said she was several weeks away from providing concrete bargaining proposals to the Chicago Teachers union, whose contract expired at midnight on June 30. Lightfoot’s team, the same bargaining team that Rahm Emanuel used, has yet to tender those proposals.

The CTU’s big bargaining team will hold a press conference at 10:30 AM TODAY, Monday, July 1 at CTU headquarters, 1901 W. Carroll, to discuss the prospect for a strike this fall, given CPS stonewalling in bargaining. And they’ll demand that Lightfoot make good on her promises—and enshrine them in the union’s contract.

For the last decade, the CTU has been battling to end the agenda of austerity, privatization and inequity imposed by the mayor, his top CPS’ executives and his hand-picked, unelected board. That agenda has driven dire conditions for students and educators in Chicago’s public schools, particularly on the South and West Sides.

In January, the CTU enshrined remedies to those dire needs in its contract proposals, among them basic education supports, teacher/staff diversity, adequate special education and bilingual education staffing, librarians and school nurses in every school, an end to the desperate shortage of social workers and counselors, restorative justice, trauma supports, early childhood education expansion, and after-school and sports programs. Lightfoot campaigned successfully on all of these issues. Yet her bargaining team has rejected every one of these proposals. 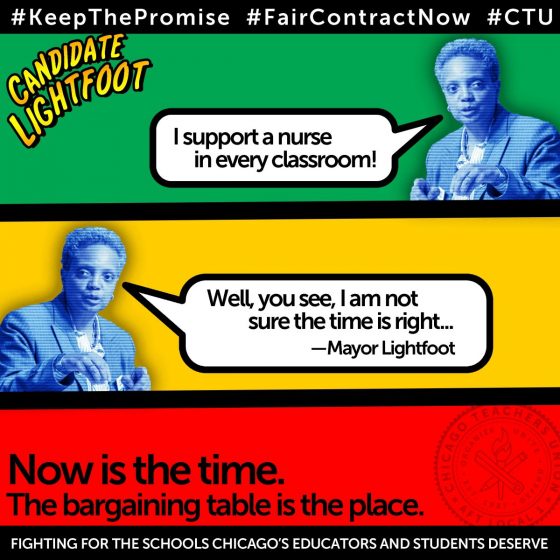