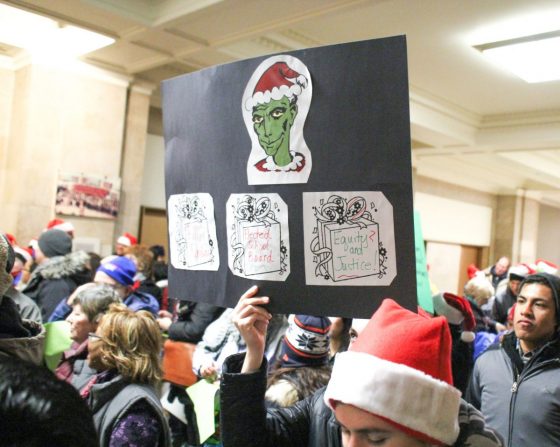 “What the mayor is doing, essentially, is robbing Peter to pay Paul, which has been his M.O. since he’s been in office. And the bottom line is this: Pension theft is as racist and sexist as any marginalization of the public sector. But then again, so was closing more than 70 schools in low-income Black and Brown communities and blocking the construction of affordable housing.

“When you look at where Chicago stands today, it’s hard to believe that the solutions he has on the table are more taxes and a nearly $10 billion loan, which would leave the same mess for the next mayor as the one he claims he inherited. This makes him a hypocrite in addition to his horrible governance. We’re also not accepting of his victory lap and revisionist history regarding the Chicago Teachers’ Pension Fund. There is still a tremendous gap between ours and the state system [Teachers’ Retirement System of the State of Illinois] due to his inaction on full funding and raising revenue, and the same teachers he praises have sued him to restore cuts to the lowest-paid city retirees, who are mostly women and people of color.

“Let’s not forget, while Rahm hatches this scheme, he’s running full throttle on securing his own Foxconn with $1.5 billion in taxpayer subsidies for a $4 billion redevelopment project of Lincoln Yards. The Lincoln Yards mega-project—a gleaming priority for a lame duck mayor among other new near South and West side redevelopments—will ensure the continued segregation of upper income newcomers that thrive off of the downtown economy.

“Rahm has fueled this economy of exclusion, and accelerated this segregation through his disastrous education and housing policies. And despite all of his empty pledges to funnel resources towards neighborhoods, he has made clear that he will spend his last months in office working to further undercut the workers who have dedicated their lives to public service and maintaining their communities in the face of his racist attacks. But this is the Rahm we’ve come to expect—tripping over himself and tripping up others on his way out the door.”