CPS can send propaganda, but can’t get Aspen to work properly?

We know about the message sent from CPS this morning about media endorsements of its contract proposals.

The district is losing, and they’re desperate. They’re responding to our power.

And trust me when I tell you this: That power is only going to grow.

We are in the third day of our strike vote. We wear red on Friday. We have the backing of Sen. Bernie Sanders, Sen. Elizabeth Warren and Vice President Joe Biden—all candidates for president of the highest office in our country. This happened on Tuesday night: 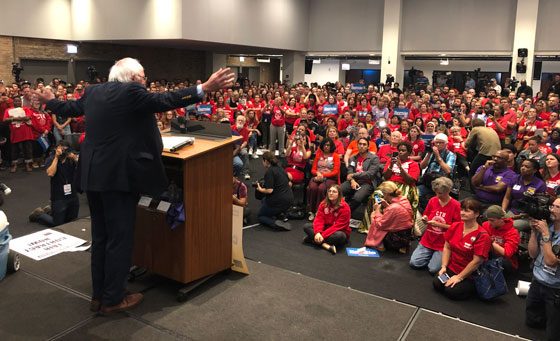 It’s obvious that CPS is using daily newspapers to react to our power when a message that used to be “those greedy teachers are sacrificing the needs of their students” is now “those teachers should take the raise and give parents and students the shaft.”

This is a transformative moment. We have a chance to truly change our school communities. Our fight is a righteous fight that we have been engaging in for the past decade to give our students the schools they deserve. We can’t stop. And we won’t stop.

There’s no amount of money in the world that would make us turn a blind eye to conditions in our schools that result from years of austerity, budget cuts, understaffing, school closings and privatization. It is insulting that the mayor and the district believe this is true.

Instead of pushing propaganda to their employees, they need to put their promises in writing for a fair contract.

Because when we fight, we win.