MENUMENU
Home > Posts > Counselors not Cops: The research behind the call for police free schools

Today, CTU President Jesse Sharkey will address the mayor’s appointed Board of Education in support of the youth-led demand to remove police from schools, while thousands gather in downtown Chicago to demand education equity for Black, Brown, Indigenous and working class children through COVID-19 safety, affordable housing and economic development, and sustainable community schools. The event will be streamed live on Facebook if you cannot join the march, rally and car caravan. 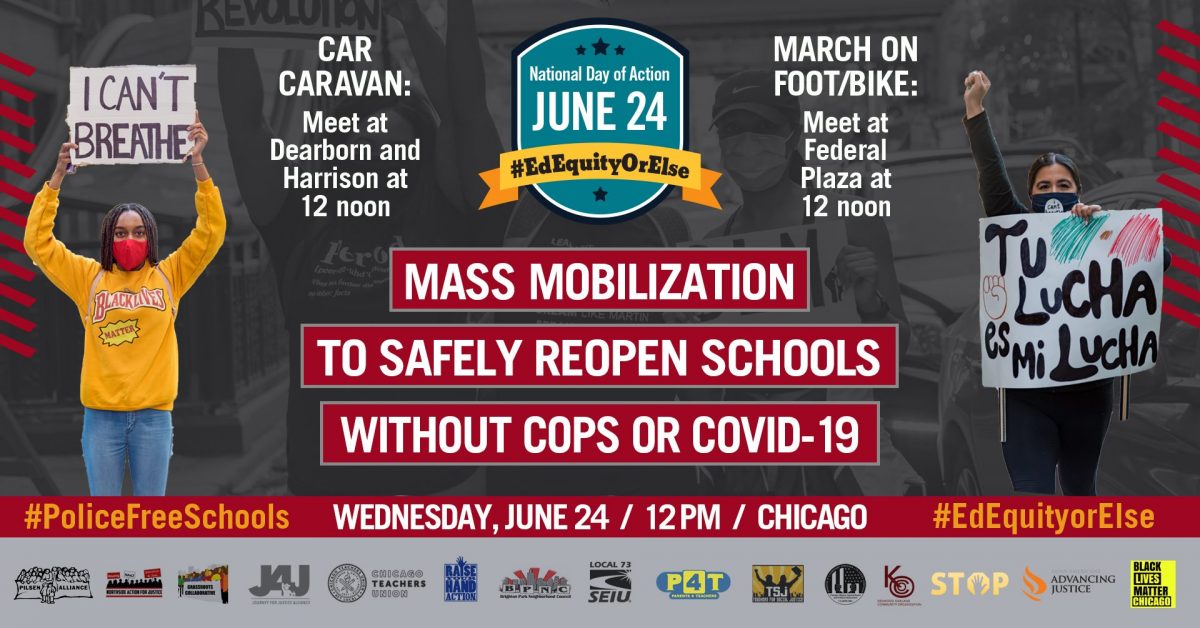 Police in Chicago Public Schools do not make students or staff safer. Instead, police in schools criminalize youth behavior and unnecessarily subject disproportionate numbers of students of color, and Black students in particular, to police, courts, and incarceration.

The Chicago Police Department’s budget has grown dramatically, even as Chicago’s population has decreased. It is time to divert a portion of those public dollars into jobs, health care, schools and housing. The easiest place to start is with ending the $33 million CPD contract with the Chicago Public Schools. That money should instead be invested in staff trained to address students’ social-emotional and material needs. Reinvesting these police dollars in mental and physical health services will be especially important as students return to school with untold amounts of trauma after the COVID-19 pandemic upended their lives and deprived many thousands of students of a key site of stability and predictability.

Recent History of Police in Schools

In 1991, then-Chicago Mayor Richard M. Daley required that every high school have two uniformed police officers. Police had previously patrolled schools from time to time, and many were hired off-duty as security guards, but Daley’s policy strengthened their presence in CPS schools. That local decision was turbocharged by the federal 1994 Gun-Free Schools Act. That law created provided $750 million in funding for 6,500 new police officers in schools across the country from 1999 to 2005, which helped solidify the idea that police belong in schools.

Indeed, the number of schools with police increased dramatically after the Columbine shooting in 1999, yet school shootings then and now remain extremely rare. The likelihood of a student in the U.S. being killed by a school shooter is one in 614 million, according to the Washington Post. Furthermore, having police in the school is no guarantee that a shooter will be stopped. According to an American Journal of Medicine article, “Among the more than 225 incidents on campuses since 1999, at least 40 percent of the affected schools employed an officer.”

If police do not stop school shootings, what is their role in a school? Often, the stated answer is to increase student and staff safety and reduce misbehavior. The evidence, though, does not support that answer. What the evidence does support is that police in schools increase stress levels and escalate the number of students funneled into in the criminal justice system. In too many cases, discipline that should be handled by school personnel is instead referred to the police. The outsourcing of school discipline to police disproportionately impacts Black students, as they are arrested between three and eight times as often as white students. Students with disabilities are also targeted, being arrested between three and ten times as often as their peers. Aggressive police presence and the use of arrests only increases the likelihood of students going into the criminal justice system, a.k.a. the school-to-prison pipeline that educators and advocates have been speaking against for more than a decade.

Nationally (and in Chicago), disciplinary proceedings initiated by school police are implemented more harshly and more frequently with students of color, particularly Black students. Voices of Youth in Chicago Education (VOYCE) shared this report of the testimony of a CPS student in a June 12, 2020, email:

I was arrested for not having my ID during a basketball game. I was arrested for 6 hours. I would have wanted the officer to ask me to leave, but that did not happen. While sitting in the cell I was angry and confused but I remained calm because I knew that situation could escalate really quick.

The student’s testimony about escalation is particularly important in Chicago, a city with a long history of police-instigated violence. One such instance caught on video occurred in January 2019, when police at Marshall High School dragged a girl down a flight of stairs and punched and tased her.

Unfortunately, such CPD behavior is all too common. According to #CopsOutCPS, a report recently released by ten community organizations, police assigned to CPS schools and their supervisors “have a combined total of 2,354 misconduct complaint records on file against them.” Many of the records involved the use of extreme force against Black Chicagoans, and 38 officers in schools had 20 or more misconduct complaints filed against them. Between 2012 and 2016, police officers assigned to the Chicago Public Schools accumulated over $2 million in misconduct settlements for activities on and off school grounds.

The harm to students who must attend schools with armed police is summarized in the Handcuffs in Hallways report:

The student population in CPS overwhelmingly consists of a demographic that has been historically marginalized and disproportionately incarcerated. These children regularly interact with police officers during the school day, putting them in greater risk of being pulled into the criminal justice system. Students report being stopped, searched, and even arrested and processed on campus. Daily interactions with police influence students’ perceptions of their own safety and increase their level of stress, especially among Black and Latino students, therefore impairing their ability to learn and develop.

As pointed out in Cops and No Counselors: How the Lack of School Mental Health Staff Is Harming Students, today’s students experience high levels of depression, anxiety and trauma. Suicide rates among students between the ages of 10 and 17 increased 70 percent from 2006 to 2016, and 72 percent of U.S. children experience a traumatic event before they turn 18. Despite this level of trauma, more than 14 million students nationally, and tens of thousands within CPS, do not have real opportunities to see counselors or social workers at school—precisely the trained professionals most able to create truly safe environments. As the report states (emphasis ours):

School counselors, nurses, social workers, and psychologists are frequently the first to see children who are sick, stressed, or traumatized — especially in low-income districts. The benefits of investing in mental health services are clear: Schools with such services see improved attendance rates, better academic achievement, and higher graduation rates as well as lower rates of suspension, expulsion and other disciplinary incidents. Data shows that the presence of school-based mental health providers not only improves outcomes for students, but can also improve overall school safety.

Police in schools do not improve student safety, student educational outcomes or student mental health. There is an obvious need for more social workers, nurses, counselors, restorative justice coordinators and staff, in general. Equally obvious is a source of funds to pay for those needed staff.

Last fall, at the direction of Chicago Mayor Lori Lightfoot, Chicago Public Schools entered into a new contract with the Chicago Police Department. The contract is for one year at $33 million and includes an option to renew for the each of the next two school years. That agreement provides police at fewer than 100 schools (meaning more than 500 schools do not have them). Cancelling that contract, which either the City or the Board of Education has the authority to do, would free those dollars to be reinvested in at least 300 counselors, restorative justice coordinators and social workers, making those staff members available to schools across the city.

CPS already has a plan and personnel to secure schools. CPS employs 1,500 security guards, trained in crisis prevention and de-escalation, and stations these personnel in every school. In addition, CPS could empower schools to hire Safe Passage workers to work during the day, between their shifts before and after school, for further de-escalation presence. In the rare instance where police are needed, nothing prevents school staff from doing what they do outside of school should they need additional help: call 9-1-1.

The choice is clear: spend $33 million to house police in schools, where they contribute to the school-to-prison-pipeline, or spend the money on measures that bring real safety to school communities. The Chicago Teachers Union supports the latter.