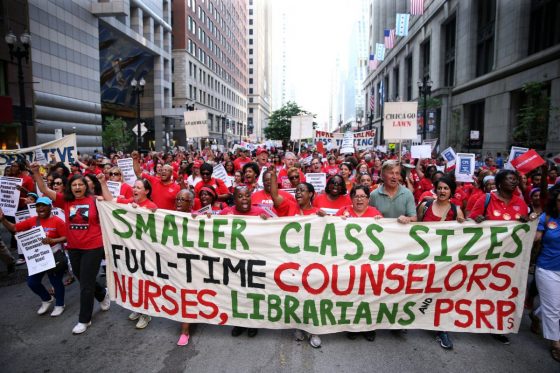 The Union recently won arbitration victories in five separate cases related to unsatisfactory REACH ratings, layoff rights, the timely filing of grievances and religious holidays. Arbitration cases are complex, time-consuming and costly to fight. CPS knows this, of course, and its tactic is often to force grievances into the lengthy arbitration process, which delays justice, depletes union resources and wears down opposition to its mistreatment of members.

We don’t put up with that. These five arbitration wins represent our refusal to surrender our contract rights or let the abuse of any member stand. READ MORE

After members started raising serious concerns last December about ASPEN, CPS’ new student information system, the Union intervened and succeeded in delaying its launch for four months. Among the changes we demanded during that delay was an end to the district’s collection of certain types of data that put immigrant students at potential risk and robbed members of much-needed time to learn the new system.

CPS is finally formally launching ASPEN on April 22 with some improvements, and, inevitably, some problems. While ASPEN is supposed to provide educators with information in real time, and streamline processes by rolling features of SIM, CIM, Gradebook, Parent/Student Portal and Verify into a single system, we’re watching for issues that impact members. If you have any problems with ASPEN or related problems with CPS administrators regarding the deployment and your usage of the system, click here to find your field rep to contact them for assistance.

For educators who’ve been targeted, abused and even terminated for speaking out on behalf of their students, fighting is second nature. That fighting spirit paid off recently for a courageous group of CTU leaders, known as the CTU Six.

This group of educators faced harassment, unjust disciplinary actions and even termination for standing up to CPS’ abusive and often illegal policies. As we fight for a fair contract at the bargaining table, it’s important to recognize that the outspoken union advocates known as the CTU Six helped build our strength for current and future battles. READ MORE

In 2005, CPS cut the number of required tests in half—from two to one. By 2014, the district had a four-page assessment calendar, and every student took at least 11 tests. The networks also got into the act, requiring “progress monitoring” and other forms of additional testing.

In case you missed the March 29 CTU Bulletin, these are the specific changes to the calendar due to the two snow days in January: