CHICAGO, August 14, 2019—The Chicago Teachers Union today celebrates the launch of CTU Speaks!, a monthly podcast by rank-and-file educators in Chicago Public Schools. The podcast seeks to empower and unify members through discussions about the union, Chicago’s public schools and communities, and local and national public education issues.

CTU Speaks! is the brainchild of the Union’s member-led Public Relations and Communications Committee, hosted by committee members Andrea Parker and Jim Staros. The inaugural episode, “Are We Striking?” features segments on bargaining with the Chicago Board of Education, in-school contract enforcement, affordable housing, sustainable schools and an interview with CTU Chief of Staff Jennifer Johnson.

“We want our members to feel more empowered, better able to advocate, well informed and more organized, especially in their schools,” Parker said. “We want to build a sense of community by bringing key decision makers like CTU officers, fellow members and local politicians on the show to share information and answer some hard questions about the state of public education in our city.”

Parker, a South Side native and 15-year veteran of CPS, teaches middle school reading at Fulton Elementary, in the same neighborhood in which she grew up. She became heavily involved in the Union after becoming a delegate in 2009 at her former school, Curtis Elementary, which was taken over—or “turned around,” according to CPS—by the Academy for Urban School Leadership. Parker was also a strike captain in 2012, and is a current member of the Union’s executive board and chair of the Public Relations and Communications Committee.

Staros is an East Coast native and chair of the Social Science Department at King College Prep, where he has been teaching since 2002. He is King’s Union delegate and serves as the district organizer for Network 4A. Staros also has been part of the CTU Summer Organizing Institute and just finished the inaugural year of the CTU Policy Fellowship.

“Every day, we are going through similar struggles and experiencing similar triumphs within our classrooms and with our individual students, and sometimes, it can feel like we are all on our own​,” Staros said. “CTU Speaks! will be a conduit for us to be able to tackle important shared issues with our members and school communities.” 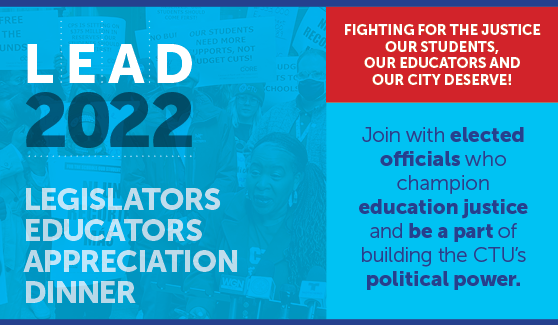