The Chicago Teachers Union today moved into week two of Black History Month following another successful Black Lives Matter at School Week during the first week of February. The campaign we are unveiling this week highlights how schools across Chicago have only one or two Black teachers, despite the abundance of qualified Black teachers who have been laid off and displaced by Chicago Public Schools (CPS).

For the remainder of this month and beyond, the Union will continue its efforts to uplift Black students, families and educators to ensure a Black future in Chicago. This work will also highlight the national crisis around the pushing out of Black educators throughout the country.

Over the last two decades, CPS, the nation’s third-largest school district, has lost half of its Black teachers. The percentage has fallen from 41 percent to 21 percent—a loss of more than 5,000 Black educators—with some of the direct causes being decades of school closings, terminations in Black and Brown schools as a result of turnarounds, and annual layoffs targeting high-need schools with predominantly Black student populations and declining enrollment. 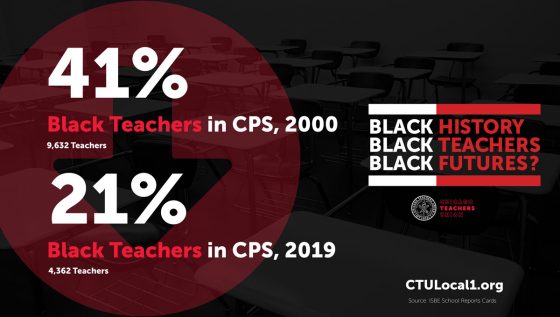 In a district that is more than one-third African-American, the presence of Black teachers is needed to improve educational outcomes for Black students, and the layoffs CPS has imposed over the last decade have clearly had a negative impact on many school communities. Many CPS students of color today will never have a single Black teacher during their time in public school, despite extensive research showing that both Black and white students benefit from having Black teachers.

The decline of Black teachers has been accelerated by the district’s chief policies of the last decade: student based-budgeting (SBB) and School Quality Ratings Policy (SQRP). Both SBB and SQRP have caused an enrollment death spiral in public schools as funding and students flowed to better-resourced schools in neighborhoods experiencing increases in population and housing costs.

CPS then failed to replace the Black teachers forced out of the system, and our school district remains deeply segregated. So even as Black teachers declined as Black schools were closed or turned around, Black teachers were then seldom hired by schools outside of Black neighborhoods. 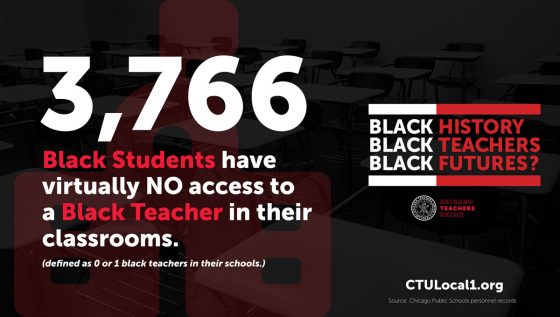 The number of schools with just one or zero Black teachers has been climbing since 2014, from 109 to 123. Now, one out of every four CPS district schools fall into this category.

“In 2001, there were about 10 schools where there were no Black teachers, and now, nearly two decades later, there are more than 60 schools without a Black teacher,” CTU President Jesse Sharkey said. “What does that tell you?”

“This isn’t by accident,” Sharkey added. “We’ve seen two decades of policy erase Black teachers at a time, when, due to high poverty, crime and the lack of affordable housing, our students need Black teachers the most.”

The Union recently filed an appeal following a ruling by a federal judge dismissing a 2012 class action lawsuit that charged Chicago Public Schools with discriminatory layoffs. In addition to seeking monetary awards for the displaced educators, the Union is pushing the district to reestablish a hiring pipeline through Chicago State University and retain Black educators in communities and schools of need. A separate case involving turnaround layoffs is still pending in federal district court.

“This lawsuit is about decades of City Hall stacking the deck against Black communities, and a natural consequence of policies that have disenfranchised Black people,” CTU Vice President Stacy Davis Gates said. “Instead of hiring and retaining experienced educators from places like Chatham, Austin, South Shore and Garfield Park to teach and nurture Black and Brown students, CPS chose to fire them, close and turnaround their school communities, and then hire a less experienced and cheaper labor force.”

“There are entire school communities today that do not have a single Black teacher in the building.”

What you can do

And join us Wednesday, Feb. 26 for a special live CTU Speaks! live Black History Month podcast on the disappearance of Black educators—in Chicago and across the country—and what teachers unions and community allies can do to reverse the trend. CLICK HERE TO RSVP.