Bill Daley has no right to meddle in public education policy

“Shortly after we release poll results that show Chicagoans want a mayor who prioritizes education and is willing to support new methods to increase revenue for our schools, Bill Daley suggests one of the more ridiculous ideas we’ve heard in recent memory. His plan to combine Chicago Public Schools and the City College of Chicago is the kind of tone deaf proposal you hear at thousand-dollar-a-plate dinners frequented by the donors supporting his campaign, and would add multiple layers of bureaucracy to two systems already struggling under their own weight.

“Both Chicago Public Schools and the City Colleges of Chicago have seen budgets slashed at the hands of politicians and business leaders cut from Daley’s same cloth, and this proposal shows he has no idea how to provide a suitable public education for our children. Voters want to see Chicago’s next mayor take real action on policies that help ensure working class Chicagoans—especially African American and Latinx voters—have access to education resources and aren’t priced out of living in their city. They don’t want to relive the same failed experiments, privatization, school closings and budget cuts that have been a hallmark of Chicago’s public schools for the past 20 years. Whoever told him this was a good idea should be fired.” 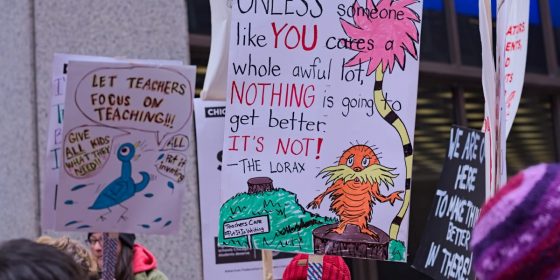 CTU schools—both district-run and charter—have new contracts. Every one of us must organize to make the most of them. Delegates, picket captains, PPC members, PPLC and LSC representatives are all strongly encouraged to come together at this school leaders training.