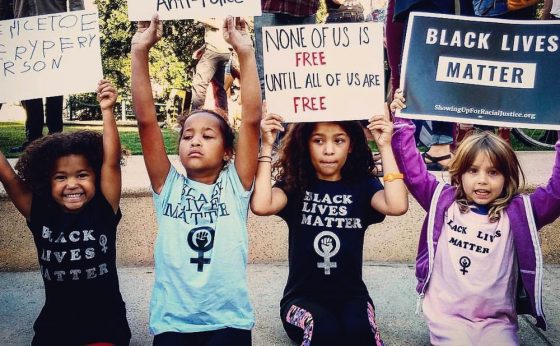 Although BLM at School Week has ended, Black History Month continues, and so does our work. There are Chicago Teachers Union contract demands aligned with BLM at Schools Week—demands that include resources and funding for restorative justice in schools (with adequate training and coordinators in every school); reduction of school resource officers, so that funds can be used for wrap-around services such as counselors and clinicians; development and implementation of more culturally relevant and sustaining curriculum; and supporting Grow Your Own and the recruitment and retention of Black teachers and other educators of color. These demands are aligned directly to the four national Black Lives Matter at School demands. Here are additional resources:

Next week, we’ll be hosting a book event (flyer below) for author Elizabeth Todd-Breland’s book, “A Political Education: Black Politics and Education Reform in Chicago since the 1960s (Justice, Power, and Politics),” which tells the story of Black education reformers’ community-based strategies to improve education beginning during the 1960s. BLM at School t-shirts and sweatshirts will be sold here, as well as other CTU events. Click here to RSVP. 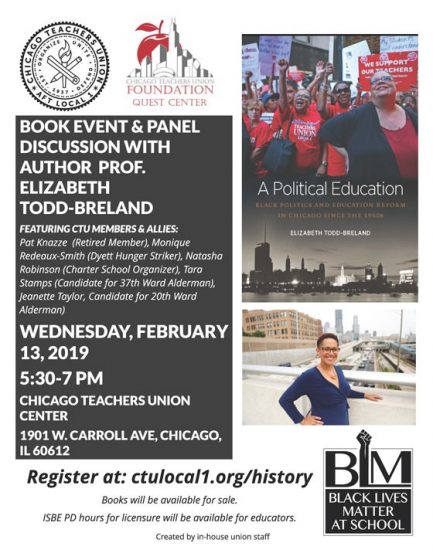 In conclusion, we recently passed a CTU House of Delegates resolution for the week, which reads as follows:

RESOLUTION FOR BLACK LIVES MATTER AT SCHOOL WEEK OF FEBRUARY 4-8, 2019

WHEREAS, the closing of public schools in Chicago, turnarounds, and other school actions have negatively and disproportionately impacted Black and Brown communities, and

WHEREAS, according to the Chicago Reporter (December 2017), “In the past decade, Chicago’s public schools lost more than 52,000 black students” and many of these Black families left Chicago for places with more affordable homes and a perception of more stable schools in the suburbs and Northwest Indiana, and

WHEREAS, Illinois House Bill 2859 was signed in 1991 and section 27-20.4 of the Illinois School Code mandated that “every public elementary school and high school shall include in its curriculum a unit of instruction studying the events of Black History,” and

WHEREAS, in 2015 Chicago City Council passed a reparations resolution requiring that the history and fight for justice of the John Burge police torture survivors be taught to all 8th and 10th grade students in CPS, and

WHEREAS, the CTU supported the development and implementation of this now named “Reparations Won” curriculum which was a part of the nationally historic and precedent setting reparations package, and

WHEREAS, the implementation of ethnic studies and culturally sustaining curricula is of critical importance to supporting the learning needs of all students, but particularly Black and Brown students who make up the vast majority of CPS students, and

WHEREAS, according to the Washington Post, so far in 2018, 957 people have been shot and killed by police, down only slightly from the nearly 1,000 people killed in each of the previous three full years, and of those killed Black men were still disproportionately represented, and

WHEREAS, Chicago’s mayor and city council have approved spending $95 million for a private contractor to build a new police training facility in West Garfield Park when CPS students and community members (such as those in West Garfield Park) need services that directly address their educational, economic and social needs, and

WHEREAS, according to the “Handcuffs in Hallways” report by the Shriver Center (February 2017), “In total, between 2012 and 2016, the police officers assigned to CPS schools accumulated $2,030,652 in misconduct settlements for activities on and off school grounds,” and “of that total, nearly $1.5 million resulted from excessive use of force against a minor and $215,000 from incidents that occurred on CPS grounds,” and

WHEREAS, according to the University of Chicago CCSR (September 2015), Black and Brown students face suspensions from school at disproportionate rates even when risk factors “such as poverty and low achievement” are controlled for, and

WHEREAS, Illinois Senate Bill 100 was signed in 2015 and was intended to reduce exclusionary discipline which disproportionately kept Black and Brown students out of school and contributed to them entering the school-to-prison pipeline, and

WHEREAS, discipline, criminalization, and over-policing of Black and Brown students has proven to be ineffective in the improvement of outcomes, damaging on their health and well-being, and restorative practices are proven to be a powerful tool in the reduction of disproportionate discipline and improved school climate, and

WHEREAS, CPS often ineffectively implements restorative practices without adequate training, support, and understanding of their role in a developmentally appropriate system of accountability, consequences, and harm reparation, and

WHEREAS, the CTU continues to advocate that CPS staff school counselors and clinicians (especially school social workers, nurses, and psychologists) at levels recommended by their respective national professional organizations in order to support and address students’ socioemotional and other needs, and

BE IT RESOLVED, that the Chicago Teachers Union (CTU) endorses participation in Black Lives Matter at School Week to begin off Black History Month the week of February 4-8, 2019, and

BE IT RESOLVED, that the CTU will host events during or around this week and engage in advocacy on an ongoing basis aligned to the national demands for hiring more Black teachers and ending the pushout of Black teachers in our schools, proper implementation of restorative practices in schools and ending zero tolerance discipline, teaching students Black history and other ethnic studies curricula, and funding more counselors in schools as opposed to police officers, and

BE IT FURTHER RESOLVED, that the CTU encourage its members to wear Black Lives Matter at School shirts to school that week and teach lessons about related topics.

For many years, CTU has advocated for women’s right to control our own bodies. Our majority-female union established a Women’s Rights Committee in the 1970s to advance our rights in the workplace and in society.[...]
Oct
6
Wed
4:30 pm House of Delegates
House of Delegates
Oct 6 @ 4:30 pm