Mayor Lightfoot released her CPS budget for FY 2020 on Thursday—and it CUTS funding for school nurses, librarians and social workers, while the mayor and her CPS team increase central office staff by more than 150. This is not an equity budget. It is a Rahm budget.

On Wednesday, the mayor’s fact-finder predictably backed the mayor, who continues to reject our proposals for smaller class sizes, adequate staffing, better wages and benefits for school teachers and paraprofessionals and real educational justice for our students. At our bargaining session on Thursday, the mayor’s negotiating team continued to parrot that line. We’re doubling the number of bargaining sessions each week, but that means little unless the mayor’s negotiating team moves forward from their hardline austerity position.

We’re convening a CTU All-Member Meeting at 1PM on Tuesday, August 20 to discuss next steps—including the possibility of a strike vote this September.

This is a critical meeting. We’ll walk through next steps in fact-finding, a legally required step in the bargaining process that Rahm and the state legislature imposed on the CTU in 2011. When the report is formally released on August 26, the clock begins ticking toward a possible strike date. And the public is with us. We got a resounding welcome at Saturday’s historic Bud Billiken parade—check out the pictures below—and parents and allies are organizing support for the CTU in the coming weeks to bolster our fight at the bargaining table.

We and our students deserve better than what we’ve been offered. We deserve the promises that candidate Lightfoot made to be kept by Mayor Lightfoot—promises that the mayor and CPS can afford. If we don’t get the resources she promised—in an enforceable contract—at the bargaining table, this mayor will own the consequences.

Join us at our all-member meeting on August 20 at CTU headquarters, and watch for info about a teletown hall—with a new vendor—on August 25 to map out next steps. For breaking news and information, keep an eye on our Facebook page and Twitter feed. Check our website for resources to help get ready for the next phase in a battle for the future of our livelihoods, our students and our schools.

We will not settle for less than real educational justice for our school communities. See you on August 20. 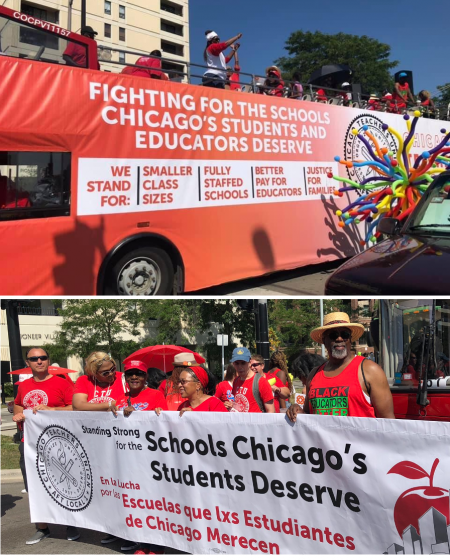 We had a joyous, inspiring day at Saturday’s Bud Billiken parade. Parents and neighborhood residents gave us a wildly warm welcome—and let us know they stand with our CTU members in our battle for a fair contract!