Be it resolved, that the Chicago Teachers Union House of Delegates will suspend the strike against the Chicago Public Schools immediately upon a CPS agreement with the CTU to restore with pay student instructional days lost during the strike. Per the CTU Constitution and By-laws, a referendum by the CTU’s entire CPS membership on contract ratification will be held within ten (10) days of suspending the strike.

So far, the mayor still insists that she will not schedule makeup days for students to regain class time and for us to recoup our lost workdays. Her hypocrisy, though, is clear to see. She and her bargaining team fanatically insisted that elementary teachers couldn’t have a 30-minute morning prep because it would “reduce instructional time.” Yet, now they have the opportunity to make up days of instruction. What reason, other than sheer vindictiveness, would they have for passing up this opportunity? That’s why we’ll still be on strike Thursday and until the mayor and CPS come to their senses and close this deal.

Some major elements of the Tentative Agreement include:

In that last contract, there were advisory class size limits for different grade levels. However, to relieve oversized classes only $6 million per year was allotted for the entire district. When a class was over the limit, the teacher would have to file for relief, a weak joint committee came and investigated. If there was money, and if there was will, the class might get a remedy.

In the tentative agreement, that protection still remains, but is strengthened. The same class size guidelines are maintained and the pool of money to remedy oversized classes is increased more than five times, from $6 million to $35 million. The committee also has more power to award remedies.

The truly new part, however, is the automatically triggered hard cap on class sizes. Those classes that are over the limit by a set amount (differing based on grade level) will be immediately and automatically referred to the committee and relief for the those classes is mandated in the contract. There will be no need for a teacher to report their class and ask for help, the committee will automatically come out to relieve the problem.

Some have mistakenly read the higher numbers as eliminating the previous class size guidelines and raising them to allow even larger classes. That isn’t so. This language keeps the previous numbers and improves the enforcement mechanism quite a bit. Once the automatically triggered classes have been relieved, there is still a larger pool of money to relieve classes that may be over the existing guideline, but under the automatic trigger mark. Those classes will need to request relief, but will still have the stronger committee come to their aid and there will be more money available to solve their problems.

At 10:00 a.m. all members should meet at City Hall to demand Mayor Lightfoot agree to make up the strike days. Costumes are encouraged, especially if they’re red (no costume weaponry, though, please). We will not have pickets at school, but schools are encouraged to arrange breakfast or lunch meetings or conference calls to discuss the tentative agreement and our next steps as a union.

Our members maintained picket lines at every school today. At noon, in the cold and pouring rain, hundreds of CTU members met to protest “The 78” luxury real estate development. Like Lincoln Yards, The 78 got a huge TIF giveaway to develop already valuable land. The $700 million that Rahm and Lori gave them would have made a huge difference for our schools. We won’t stop reminding the public and the politicians that Chicago isn’t broke, the City’s priorities are.

As the bargaining team finalized the deal, new information emerged from Springfield. 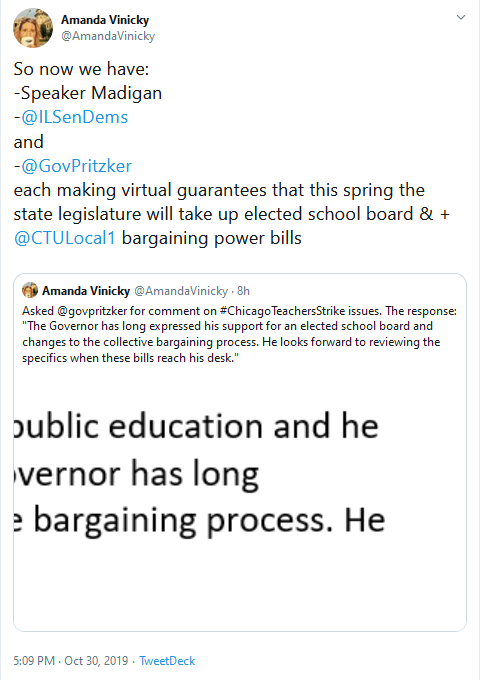 Looking ahead and building power

As you talk about the tentative agreement, it’s worth thinking about the conditions at your school. Whether or not this TA is ratified, we will eventually have a contract. It’s important that everyone build on the solidarity and momentum you’ve developed together on the picket line to enforce it. If the fight for good working and learning conditions were a war, the strike would be the “air war.” It can win a lot, but what ultimately determines day-to-day conditions is the “ground war”—the back-and-forth between administrators and staff in each school and workplace.

Read the TA (and the existing contract, for that matter) with an eye to the changes you want in your school. Try to come up with one change—big or small—that CTU members, together, want to see in your work environment. Then you can use our Campaign Planning Worksheet to brainstorm your campaign for when we return to work. When members at your school have agreed on a rough plan, check in with your organizer and/or field rep to talk through the details of putting it into action.

Union staff will continue to work hard in support of your rights. In your campaigns, they’ll help you refine your strategy and back you up. And they’ll always stand up for your rights in grievances and arbitration. If you organize well, you can make change without the long process of a grievance and help build your school’s solidarity and power.