For ten months we had absolutely no progress on key proposals. After only two strike days, we have seen considerable movement and crucial openings on issues such as homeless students, class sizes, staffing and other key issues that the mayor told us would not be open for bargaining. Today, we got a tentative agreement for specific staff positions to support Students in Temporary Living Situations (students who qualify as homeless). For Pre-Kindergarten classes, we won contractual guarantees that CPS will follow Illinois law in maintaining a ratio of 1 adult for every 10 students in a Pre-K classroom. We also won guaranteed naps for preschoolers in all-day pre-K programs. We won language that counselors will not be pulled from counseling to do other duties such as substitute teaching in a classroom. This will lead to greater counselor access for our students.

We also brought CPS a new counter-offer on class size, today. We need guaranteed caps on class sizes and we continue to fight for them. There are still many open issues, including prep time and steps for veteran teachers, as well as a raise capable of moving our lowest-paid paraprofessionals above poverty wages.

Our gains have only been possible thanks to the strength of our picket lines, the turnout at our afternoon protests and the support we’ve gotten from students, parents and community members. Keep it up!

Pickets Monday at 6:30am

Although we made progress over the weekend on important issues, this strike will need to continue Monday. Like Thursday and Friday, all CTU members are directed to picket at their schools, starting at 6:30 a.m. Although different schools have different start times, it’s important that our union operate as one. Keep talking to parents, students and community members about what we’re fighting for. Despite the expected rain, we need to keep up our strength to win what’s best for our schools and our students. Dress for rain, bring umbrellas and boots. Take turns coming inside. But keep those picket lines strong from 6:30 to 10:30!

In a number of neighborhoods, educators at schools near one another are coming together for particular actions tomorrow.

CTU strikers will line Pulaski from Archer to 111th from 8:00am to 9:00am. Contact Organizing@ctulocal1.org for more information.

Hyde Park “Nurse in Every School” Solidarity March for Justice

CTU, SEIU, National Nurses United and Graduate Students United at University of Chicago are combining forces to put muscle behind our call for adequate and equitable nurse staffing. Marches will start at area schools between 8:45 and 9:00 am and converge on Kenwood Academy at 9:45am.

You can email Michael Shea of Kenwood Academy for more information and coordination.

Our afternoon rallies have been incredibly effective in demonstrating our unity and the sheer scale of what we are fighting for. Keep coming!

Monday, we will march from Union Park, at the corner of Washington and Ogden. The location is accessible from the Green Line Ashland stop and by bus (Ashland, Ogden, etc.).

Youth will hold an action at City Hall at 1:00 p.m. to highlight the need for $15 per hour minimum wage AND the need for a fair contract that enshrines the resources schools need to combat things like overcrowded classrooms and housing issues.

The R3 coalition will host a Teach-In for Strikers so that they may learn about community based struggles that support and intersect with teachers demands for education justice. It will be held at Experimental Station (6100 S Blackstone) from 12:00 to 3:00 pm.

The Grassroots Collaborative will be setting up an art build at the CTU Center Monday night from 5:00 to 8:00 pm to create signs and props for colorful and impactful actions later this week. 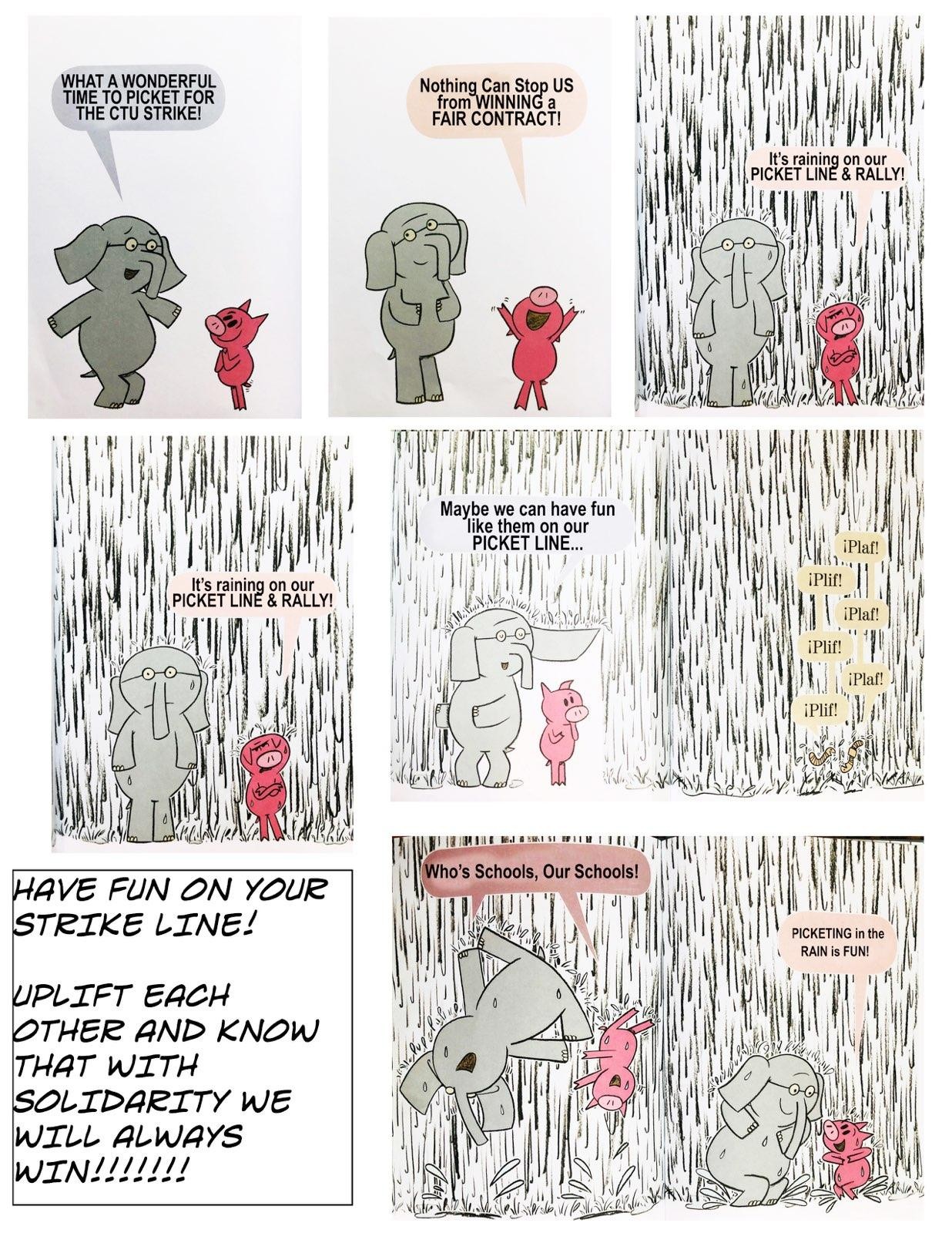 Image adapted by Jesus Sanchez of Social Justice HS from Are You Ready to Play Outside? by Mo Willems.