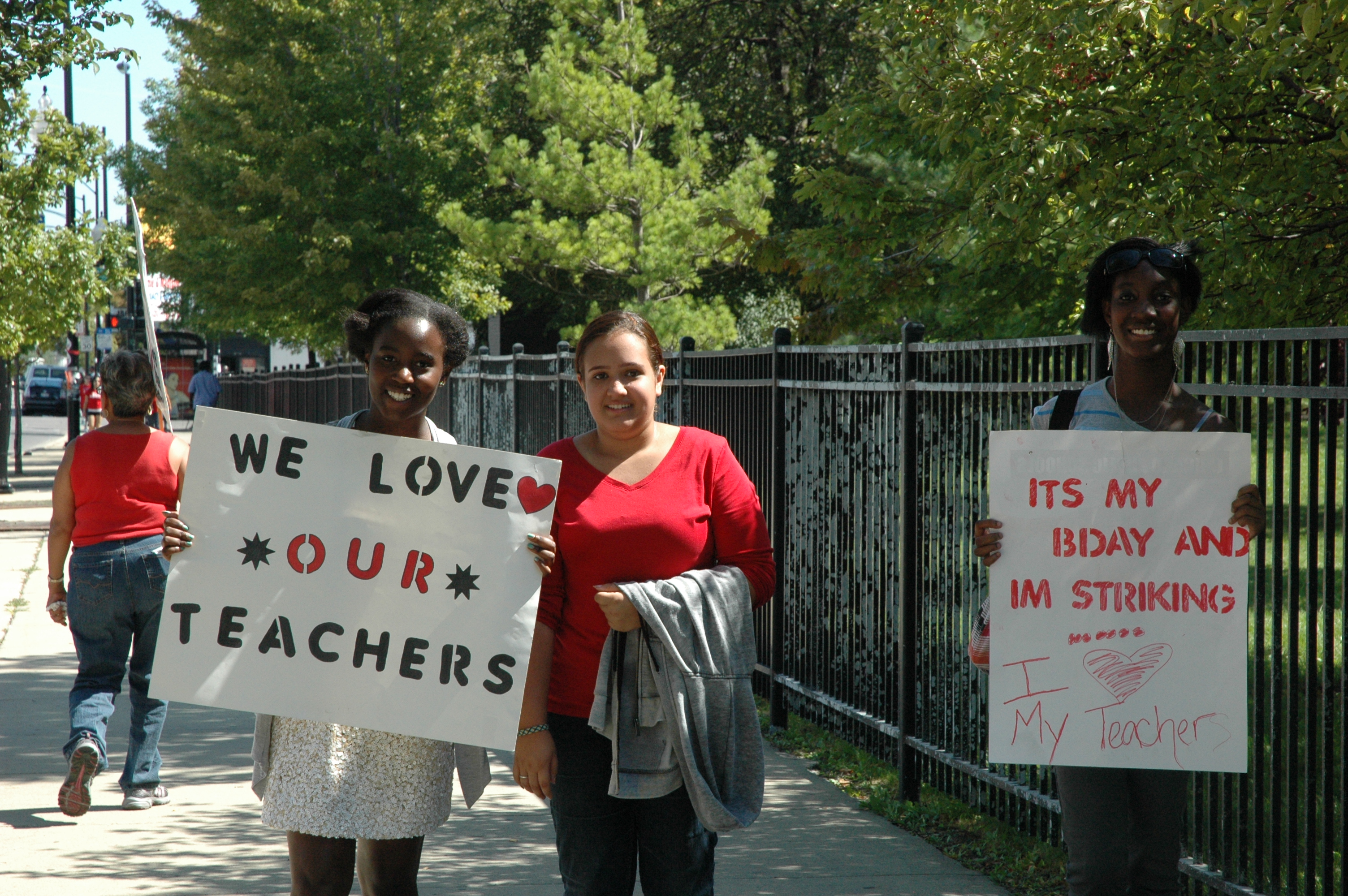 CHICAGO –As contract talks continue to two steps forward and one step backward, the city’s 29,000 public school educators enter their fourth day of a labor protest that has shut down schools across the city. An independent new poll indicates the majority of the public and parents support the teachers strike and blame Mayor Rahm Emanuel and his hand-picked school board for the District’s education woes.

The Chicago Teachers Union (CTU) negotiation team finished Wednesday’s labor talk’s minutes before midnight saying “there has been significant movement in the last 24-hours—but we aren’t quite there yet,” said President Karen Lewis. “They’ve moved inches in some areas, now we need them to move yards; there’s no reason to prolong this any longer than they have. Until we have a clear landing, our members will stay engaged on the picket lines.”

On Saturday, labor, civil rights and education justice allies from around the country are expected to descend upon Chicago and join CTU members, parents and allies in a massive march for education justice.  Today, pickets at Board headquarters started again at 6:30 a.m.  Negotiations continue today at 9:30 a.m. at the Chicago Hilton and Towers. Later in the afternoon demonstrators are expected to highlight the Board’s misplaced budget priorities by picketing billionaire Board of Education member Penny Pritzker. Demonstrators will meet at 3:30 p.m. at the Hyatt Regency at 151 E. Wacker Drive.

According to Capitol Fax, an influential political report that covers state politics, “Chicago teachers have a strong majority of Chicagoans behind them, according to a new poll.  Also, an overwhelming majority of Chicago parents with public school students support the strike, the poll found.  And strong pluralities blame Mayor Rahm Emanuel.”

Conducted by We Ask America, the poll of 1,344 voting Chicago households asked, “In general, do you approve or disapprove of the Chicago Teachers Union’s decision to go on strike?” 55.5 percent said they approved and 40 percent disapproved.  Another 4 percent had no opinion.  The poll has a margin of error of +/- 2.8 percent,” according to Rich Miller, the report’s publisher.

(CTU) support jumped to 66 percent among parents of public school children.  Less than a third of those parents, 31 percent, disapproved of the strike, according to the poll.  Among people with no school-age children, 51 percent approved of the job action, while 44 percent disapproved.

Asked who they thought was “most to blame” for the strike, just over 34 percent pointed their finger at Mayor Rahm Emanuel, while 29 percent blamed the Chicago Teachers Union and 19 percent blamed the school board.  In other words, a solid majority blames management, one way or the other.

At this point, there’s not much Emanuel can do.  The union has so much energy and real anger behind it right now that finding a way to end this thing is impossible in the near term….”

The union is not on strike over matters governed exclusively by IELRA Section 4.5 and 12(b).

Back in April 2020, the Chicago Sun Times profiled Mariah Bingham (above), who is just one of 17,000 houseless CPS students. Stories like these are why the CTU’s Housing Committee exists. You’re invited to a[...]
Feb
18
Sat
all-day Canvass for Education Champions
Canvass for Education Champions
Feb 18 all-day
Click the “Read More” button to see the listing and sign up.
Feb
19
Sun
2:00 pm Bid Whist and Spades Tournament ... @ CTU Center
Bid Whist and Spades Tournament ... @ CTU Center
Feb 19 @ 2:00 pm – 7:00 pm