A year of firsts as LSC elections mark 16th year

But three decades later, elections still a “tale of two cities,” with wide disparities in participation across district. 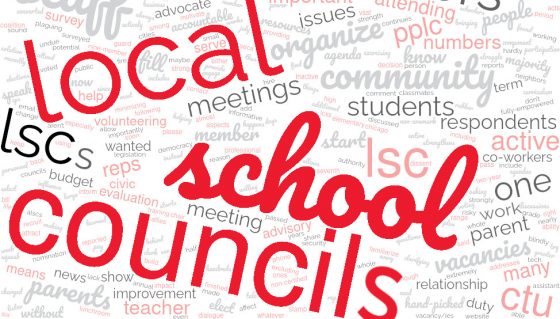 CPS just finished the 16th LSC election cycle in the 32 years since the creation of the Local School Councils —  and it was a year of firsts. For the first time, 12 schools converted from Advisory LSCs (ALSCs) to fully-empowered LSCs with the ability to hire or fire the school principal. Four new schools held their first LSC election. And, for the first time ever, elementary students could elect a seventh or eighth grade classmate to represent them on the LSC and high schoolers now elect three classmates instead of one.

CTU has made LSC organizing a large component of its work and that organizing continues to pay off. The vast majority of schools have at least one CTU member on the LSC. Only six schools, out of 517, did not have a teacher run for LSC and 22 had only one candidate. Those are impressive numbers.

Now for the bad news. Thirty-eight schools, about 7 percent, did not attract enough LSC candidates to have a quorum. Without one, LSCs cannot legally conduct business. While this number may sound small, it means a lack of democracy will affect almost 2,200 school staff and over 14,000 students at schools where the LSC will not be able to conduct the annual principal evaluation or oversee the school budget and improvement plan.

Nine percent of schools did not have a non-teacher rep run. This position can be held by any non-certified staff member who works at least three days a week at the school. The school clerk, a teacher assistant, a tech coordinator, a SECA, a non-Aramark CPS-employed custodian, a security guard or a lunchroom staff person can all serve on the LSC. Who among these people has a good relationship with parents at your school? Ask them to run for the LSC.Thirty-eight schools did not attract enough LSC candidates to form the quorum legally required to carry out business.

CTU recently surveyed members about the LSC elections at their schools. We wanted to understand why members did or did not vote or run in the election. We also wanted to know if schools had any election issues, beginning with the candidate nomination period back in January.

The survey found that most respondents, 76 percent, feel very strongly about exercising their civic duty by voting in the LSC election, but feel less enthusiastic about volunteering time to serve on an LSC. Only 26 percent of respondents said they thought volunteering on the LSC was a good use of their time.

Our members know that LSCs hold a lot of power, but they also understand that many do not exercise their full range of authority. We also learned that only about half of the principals at survey respondents’ schools actively promoted the election, using various means to inform students, staff, parents and neighbors to run and vote.

Like many other aspects of life in Chicago, LSC participation is a “tale of two cities,” or maybe three. The schools that have active LSCs, have extremely active ones. The inactive LCSs hardly ever meet and don’t vote on anything important, while the majority of schools have LSCs that are moderately active, even if blindly following the principal most of the time.

Why do so many schools struggle to engage the greater school community in local governance?  Hundreds of members reported nearly the same issues plaguing their schools: the LSC is hand-picked by the principal, acts as a rubber stamp for whatever the principal wants, and it can be too risky to speak up or advocate for change.

As always, the solution is for the staff to organize. The first step is to recruit LSC candidates who are willing to listen to the entire school community, not just the principal or a select few hand-picked people. And remember, a lot of work happens behind the scenes organizing before, not during, LSC meetings. Share each other’s email addresses and phone numbers. Advocate for LSC meeting agendas to include important discussions that will motivate parents and staff to attend and to speak during public comment. Hold your principal and LSC chair accountable and do not allow them to squash dissent or dialogue. Your assignment for next school year is to start attending LSC meetings and to encourage your co-workers to do the same.

If your school does not have an active Professional Personnel Leadership Committee (PPLC),  the nine-member teacher advisory committee to the LSC, then make sure you get one started next fall. The PPLC is charged with providing monthly reports to the LSC. By attending meetings and bringing up issues important to teachers, staff and parents, the PPLC can help build strength in numbers, thus minimizing the impact of a principal or individual LSC members to run the show or exert undue influence over decision making. School staff should also make sure that a few people show up to every LSC meeting and ask clarifying questions of things being discussed, especially if the LSC members aren’t asking.

And most importantly, organizing is about relationship building. Get to know and work with the parent and community reps on the LSC. You all have been elected for the same reason: to keep the principal accountable, oversee the school budget, approve the school curriculum, make sure that staff has the resources it needs, and develop school improvement policies.

If your LSC has vacancies, try to fill them as soon as you can because without a quorum you cannot vote on any agenda items, including the transfer of funds and principal evaluation. Fortunately, a bill passed this year allows LSCs to vote in additional members after the new term starts in July.

As long as there are at least four LSC members, excluding the principal and students, and as long as two of those positions are held by either community or parent reps, the LSC can vote to add new members any time during the next two-year term. If your LSC has ANY vacancies,  make sure that each LSC agenda includes “Fill LSC Vacancy/ies” so new members can be voted in at any LSC meeting. Make sure the whole school is helping to find potential candidates.

So your assignment for next school year is to start attending LSC meetings and to encourage your co-workers to do the same, to fill LSC vacancies right away, to organize a strong PPLC, and to start working with the parent and community reps on the LSC.

CTU and its allies have worked hard to pass legislation that strengthens LSCs and to provide informative training workshops for all LSC members. Please familiarize yourself with the LSC resources on the CTU website and the LSCs 4 All coalition, of which CTU is a member. And  contact us if you need help organizing at your school. We are here to support you.

Sarah Rothschild is a policy analyst at the CTU.