Why are billionaires spending millions to defeat the Fair Tax?

Why is Ken Griffin, one of the richest people in Illinois, joining his wealthy friends to spend millions to defeat the Fair Tax Amendment on the November ballot?

“That’s easy,” said CTU Legislative and Policy Director Kurt Hilgendorf. “They have a sweet deal and they want to keep it.”

But that deal’s time is coming to an end. Illinois voters have a chance on the November ballot to scrap the flat tax and adopt a progressive income tax, known as the Fair Tax.The flat rate tax is responsible for the chronic under­funding of our schools.

Illinois is one of just a handful of states with a flat income tax rate. Under this fundamentally unfair system, the top 1 percent of Illinoisans pay just 7 percent of their income in state and local taxes, while middle and low-income workers pay nearly double, 13 percent.

That regressive tax system is responsible for the chronic underfunding of our schools and other public services.

The Illinois Constitution—the same constitution that mandates the flat tax—directs the state to provide the majority of funding for public schools. But, in reality, the bulk of funding—54 percent—comes from local property taxes, giving Illinois the eighth most regressive tax system in the nation.
The reliance on property taxes also means that the poorest districts, including CPS, with the greatest needs, have the least resources available.

If approved in November, the Fair Tax Amendment would change all that by rewriting the disastrous clause in the state constitution that requires the flat rate. The new Fair Tax, also known as a progressive income tax, would apply only to those making more than $250,000 a year—or just 3 percent of Illinois’ population. Everyone else would see no change in their state income taxes or receive a tax cut.

“Will the Fair Tax solve all our problems overnight?” Cook County Commissioner and CTU Organizer Brandon Johnson said. “Of course not. But it will begin to address the stark inequalities that our public schools face.”

Johnson joined CTU Vice President Stacy Davis Gates, Sen. Rob Martwick and Hilgendorf for a virtual Fair Tax Forum in September to present the facts about the amendment and challenge the lies being advanced by a well-funded, massive right-wing misinformation campaign.

Martwick, the chief sponsor of the amendment, advised CTU members to be vigilant and not take its passage for granted. It needs to garner 60 percent of those voting on it to pass.

“This is a once in a lifetime opportunity to level the playing field,” he said. “This is about bringing more resources to our classrooms, but let’s be clear. The choice isn’t between getting more resources or staying the same. Without the Fair Tax, we’ll be going backward for years to come, and I can’t even imagine that.”

“Everything we’re experiencing in this moment is connected to a tax system that is unfair and places all the burden on working class families,” Davis Gates said. “This is about securing the future of our state for our children.” 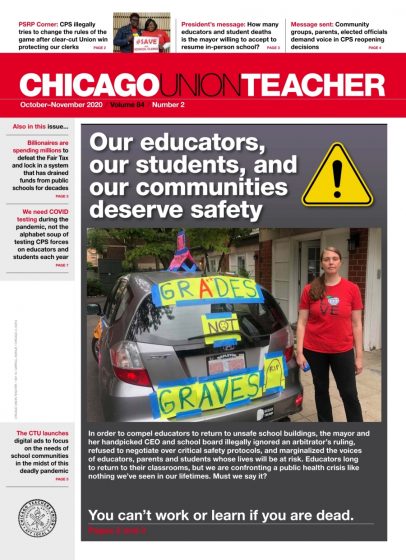