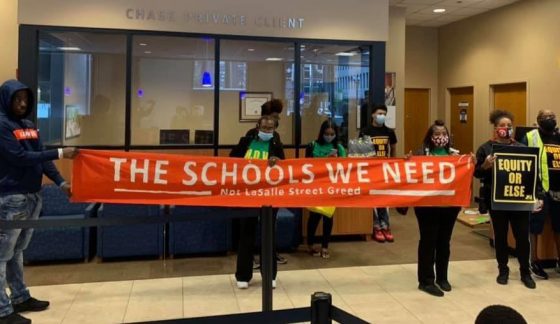 CTU members and the Grassroots Collaborative occupied the lobby of a Chase branch in the loop as part of the Aug. 3 National Day of Action to demand the safe reopening of schools. Photo: CTU

In order to open schools safely and give our communities the resources we need to weather the COVID-19 pandemic, we need to invest a lot more funds in our under-resourced public services. We can only pay for that if we make the ultra-wealthy pay their fair share in taxes– and if we stop wasting money on things that do more harm than good. Specifically, this means defunding the police and canceling our payments to Wall Street.

Even though nearly 40 percent of the City of Chicago’s budget is devoted to the $1.7 billion police department budget, it has not made communities safer. It’s time to divest from policing and redirect that money into community-centered programs. At the same time, the City of Chicago and Chicago Public Schools spend another $1.6 billion a year on interest payments to Wall Street investors. City/CPS spending in both areas diverts scarce resources away from Black, Latinx and immigrant communities struggling through the twin threats of a global pandemic and economic recession. Both of these costs–interest payments and excessive police spending–are used to justify deep cuts in community services. We need to cancel or reduce these payments and return that money to our communities.

In the lead-up to the 2008 stock market crash that was fueled by subprime loans, banks like Wells Fargo and Bank of America targeted many African American and Latinx families with predatory mortgages that had hidden fees and risks. When the bottom fell out of the housing market and the cost of those mortgages ballooned for historically excluded communities, the two groups lost more wealth than at any time in United States history. A record number of Black and Latinx families were thrown out of their homes as a result.

Meanwhile, the aftermath has been much more generous to the culprits of the crash, the banks themselves. Even though the Federal Reserve created a variety of bailout and backstop programs to encourage them to make affordable loans to families, small businesses, and state and local governments, the banks severely cut back on lending to Main Street. Even though nearly 40 percent of the City of Chicago’s budget is devoted to the $1.7 billion police department budget, it has not made communities safer. In the seven months following the October 2008 Wall Street bailout, Bank of America’s lending through the Small Business Administration’s flagship program declined 90 percent. At JPMorgan Chase, the number went down 85 percent.

Furthermore, when banks did make loans to families and small businesses or underwrite bonds for state and local governments, they kept charging borrowers high interest rates even though the Federal Reserve was lending money to banks at near-zero interest rates. Instead of passing those savings onto taxpayers, banks and lenders kept fleecing them. Ironically, the very market crash that the banks created placed additional strain on local government budgets, which led to lower credit ratings and higher borrowing costs.

This same pattern is repeating itself today, with the bailout programs the Federal Reserve has announced in light of the coronavirus pandemic. Even though the Fed is making very low-interest debt available to corporations like Apple, Microsoft, and Goldman Sachs, cities like Chicago and the Chicago Public Schools are stuck paying investors over $1.6 billion a year in interest payments on their municipal debt. Getting angry yet?

In order to stop this vicious cycle that socializes the profits of private tyrannies in the financial sector while eradicating the wealth of Black and Latinx families, the Federal Reserve must cut out the middle man.

That’s why the CTU and allies in the Journey for Justice Alliance, the Kenwood Oakland Community Organization, the Grassroots Collaborative, and the ACRE — the Action Center on Race and the Economy — led a series of bank actions in August to demand interest-free financing for social needs in this moment of crisis. We need the federal government to make grants to our state and local governments to give us the resources our communities need to thrive.

However, if Trump and the Republican Congress fail to act and we have to borrow to make ends meet, we should not have to pay investors dollar for dollar for spending on vital community needs. We will not be able to reopen schools properly unless the financial industry pays back all the money it has taken and continues to extract from public schools, municipalities and state governments.

Instead of gifting free money to banks who turn around and use it for usurious schemes to our cities and states, the Fed must expand the Municipal Liquidity Facility, initiated during the coronavirus pandemic, and improve the terms for our local taxing bodies. Chicago spends a combined $3.2 billion, about two thirds of the city budget, on ineffective policing and inflated bank interest. Imagine how many homeless people could have homes, how many violence interrupters we could hire, mental health clinics we could reopen, or government jobs to build a green energy grid we could create with those funds!

Nothing less, in this unprecedented economic and public health crisis that has laid bare the racist logic of our social structure, is acceptable. Defund the banks and police to open the door for a better and more just social order.

Jackson Potter is a social studies teacher at Back of the Yards College Prep High School. Saqib Bhatti is co-executive director of the Action Center on Race and the Economy (ACRE). 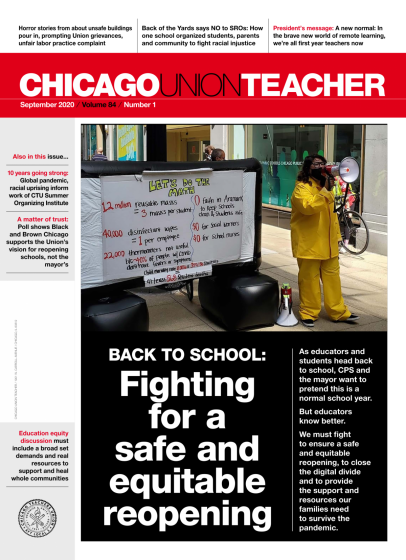