President’s Letter | Not a moment, but a movement

I have never been prouder of our union. On Oct. 17, we set out on a righteous mission to transform our school communities by demanding that the city enshrine in our contract the mayor’s promises of equity and justice for our students. They tried to break us by dividing us, and failed. As much as they tried to make it about pay, when CTU members spoke, you spoke about the issues—class size, staffing and bargaining for the common good. At every point, we were setting the tone.

It took an historic 11-day strike with 30,000 educators, school staff, parents, students and community allies flooding the streets, but we accomplished what we set out to do. Thanks to the power, unity and strength we showed, we crossed every line the mayor drew in the sand. After she said class size and staffing do not belong in a contract, she put class size and staffing into our contract. She said there was no more money, and then found more money. She said she was not going to make up any days, and then made up five days of student instruction. All of this came after adopting our platform as her own during the mayoral campaign, but recoiling at actually putting the principal tenets of that platform into a legally binding contract.

Between the day we walked out and the day we went back, we forced $109 million a year more into our contract that would not have been there had we not gone on strike. On the occasions when they tried to turn public sentiment against us, we stood firm, reiterated our demands and escalated. Nine courageous members were arrested, and throughout negotiations, our rank-and-file bargaining team pushed as far as they could go in their dealings with CPS, then pushed even further. In the end, we won a tentative agreement we can be proud of.

Our fight brought desperately needed resources and supports to CPS classrooms, new class size provisions, puts a nurse and social worker in every school, and for the first time, ensures a living wage for the mostly Black and Brown PSRPs women who are the backbone of our school communities. Ultimately, the goal of contract negotiations is to put something in place that makes your life at work better, and we have achieved that through tremendous effort and selflessness—all of the things that made our strike wonderful. All of the things that make our union wonderful. It was a heroic undertaking, but we also need to start girding for the many struggles we know lie ahead.

The writing is on the wall. We expect the mayor to propose her own round of school closings, hitting neighborhood high schools in Black and Brown communities especially hard. The ink wasn’t even dry on our agreement before the Chicago Tribune began demanding this, claiming that school closings are needed to promote equity and protect students.

We will continue the fight in Springfield for an elected representative school board and restoration of our collective bargaining rights. Both Senate and House leadership pledged full consideration of both bills in the spring legislative session, but we know that political promises are only as strong as the movements that hold elected officials accountable. Our union has been working with a broad-based coalition of parent and community groups to pass these bills and that movement is stronger than ever. We need every CTU member to become engaged in this fight, starting by contacting your state senator on a regular basis and demanding the same fundamental democratic right that all other Illinois residents receive to elect their school board members.

I also ask you to remain engaged with union committees and in schools with your PPCs. Our strike was another leg—albeit an historic one—in our long march to education justice for our students, their families and communities, but this ground-level involvement is what will improve the quality of life in your buildings. Collective bargaining agreements are only as strong as the workers who hold the bosses accountable and enforce their contract rights at every turn. Workload reductions, class size limits, ELL resources, sanctuary protections and special education articles are just words on a page without the vigilance of members to hold CPS and the mayor accountable for fulfilling their commitment to our schools.

Our strike showed what is possible when we are strong and united, and I thank you, deeply, for your hard work and perseverance. I continue to be inspired by your courage, and I am confident that we are up for the challenges that lie ahead. 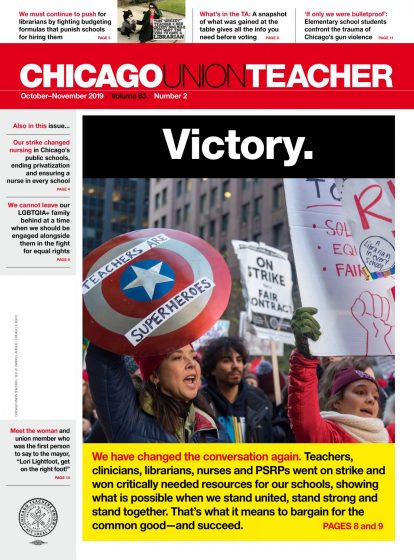