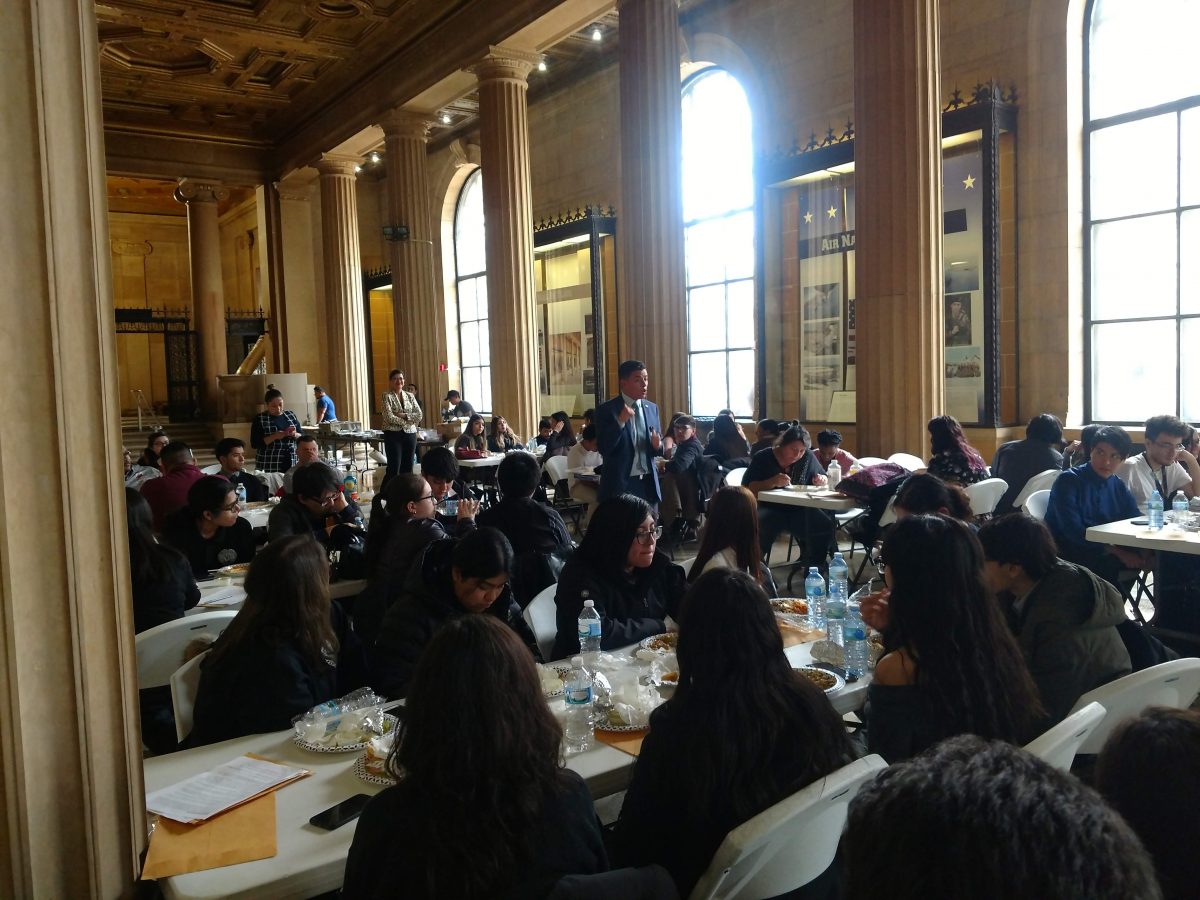 Students from Back of the Yards High School’s Junior Civics class take a break from their lobby day in the state capitol.

One afternoon in late February, I engaged in a massive undertaking. I brought my entire set of Junior Civics students, nearly 150 in all, to Springfield for a Lobby Day.

Arranging and paying for the buses, getting enough chaperones, providing lunch and aligning to the state capitol’s schedule were huge logistical hurdles. But those challenges paled in comparison to the exciting classroom work we did in the months leading up to the event and the excitement and engagement my students felt being in the Illinois capitol.

Prior to our trip, students heard from several speakers, including Kurt Hilgendorf, the Chicago Teachers Union legislative deputy, who gave students a run-down of how the legislative process works. We also heard a speaker from Precious Blood community organization who lost her son to a life-time prison sentence when he committed a violent act at age 15. The Brighton Park Neighborhood Council discussed the dangerous ramifications of Chicago’s gang database and efforts to repeal it. And a representative from Lift the Ban Coalition described efforts to enact rent control in Illinois.

Taking in all this information, students analyzed bills and role-played with me and other teachers acting as different types of legislators. For example, we practiced how to handle the legislator who’s rushing you or patronizing you or just distracted.

I wanted students to make choices about what was most important to them to benefit their communities, families and country. I wanted them to have a chance to explore the messy nature of policy-making and the nether-world of lobbying. It was eye-opening, instructive and necessary, if young people are to learn how to wield the levers of power and ultimately change a system designed to keep them marginalized.

Here’s what a few of my students had to say about the day:

Getting to lobby in Springfield was a very good experience. I really enjoyed getting to experience what we were studying in class rather than just discussing it during class. During our trip, my team and I sent multiple cards requesting to speak to legislators but unfortunately were not able to do so. At one point, I tried speaking to a legislator but was nicely cut off because he said he was late for his meeting. I think this field trip was very educational because I did realize how much power I had in speaking out about a topic.

I would see that the people there saw us and immediately grabbed their phone and walked away “busy.” I guess, now that I am kind of older, I am noticing different behavioral changes of adults toward TEENS, not children.

Going to Springfield was a good experience for me. This is because it was my first time going and it was also my first time lobbying. I was able to talk to Representative Theresa Mah. I felt comfortable talking to her because she was not a stranger to me. She was for the rent control bill and was actually one of the sponsors for this bill. I was able to talk to other lobbyists and they thought that it was really amazing that young people where so involved in politics. I thought it was going to be hard talking to the legislators because I thought they were going to be rude, but they were really nice, for the most part. Amazing experience!

When talking to representatives, my group and I encountered one… that was “too nice.”  She acted like she was listening to us, but she mostly thought it was “great” what we were doing as students (lobbying). I learned a lot and feel like I’m more confident in approaching people now that I’ve learned to approach people in important positions.

Jackson Potter is a social studies teacher at Back of the Yards High School and former CTU staff coordinator.