Educators at “Teach-In for Freedom” draw attention to child abuse at border, stand up for immigrant students and their families 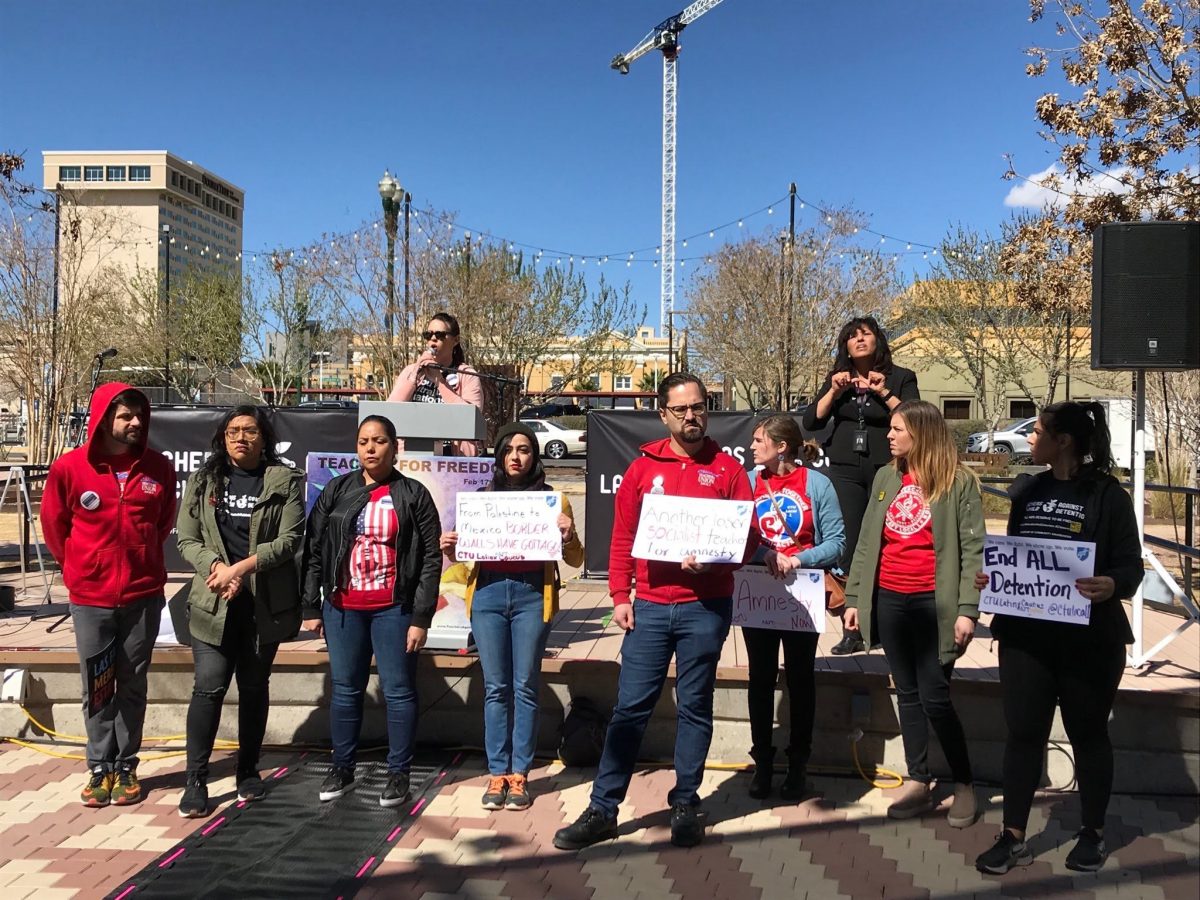 CTU members went to the southern border for a Teach In on Freedom to defend immigrant children and others from racist Trump policies.

In February, President Donald Trump declared a false national emergency in an attempt to access funds to build an unnecessary wall along the Mexican border. His announcement was another racist and xenophobic attack against immigrant people who are the backbone of the communities we teach in and the country we live in.

Prior to this announcement, a group of 10 Chicago Teachers Union (CTU) members had already decided to travel to the U.S. southern border in El Paso, Texas to attend the “Teach-In for Freedom” organized by the newly formed group Teachers Against Child Detention (TACD).

The purpose of the teach-in was to draw attention to the inhumane and horrific child abuse happening, on a daily basis, to migrant children being jailed at the border and to demand the end of detention and criminalization of immigrant families by the U.S. government. It was by coincidence that the false national emergency and our trip fell on the same weekend, but this coincidence served to reinforce the urgency and importance of our trip.

There was a dire need for CTU educators to have a strong presence and make a strong statement at this event in solidarity with our immigrant students and their families. This is not only a fair and just demand on behalf of our union, it is also the starting point for what needs to be done to reverse the harmful immigration policies that have been implemented in this country.

The 10 teachers who traveled to El Paso are either members of our growing CTU Latinx Caucus or allies in the struggle for immigrant justice. We all traveled to the teach-in for the same broad reason, to support the demand for an end to child detention and family separations. But each of us was motivated by other factors as well.

Some members of our delegation had already taken action to help stop the deportation of their students, their family members or others in their school community. Others have family members who are undocumented and personally know migrants who have been jailed in detention centers. Most of the members who traveled to El Paso work in schools with a sizeable immigrant population and see firsthand the harm being done to our students and the trauma they experience.

Although we didn’t all know each other before this trip, we will forever be bonded through our experience and our commitment to fight for the basic human right to migrate between lands separated by man-made borders, to fight for the end to cruel and unjust treatment of child and adult detainees, and to advocate for the humanity of our students, our families, and our communities.

The teach-in itself was a moderate success with just over 300 attendees from across the country and some local media coverage that amplified our demands. The majority of speakers were local union leaders or teachers from various states. Their speeches covered a variety of topics, such as the history of immigration, detention centers today, and the special impact of detention centers and persecution of immigrants on children.

The event organizers knew that a CTU group would be attending and gave us space to speak at the event. Two powerful and passionate educators, Roxana Gonzalez and Gabriel Paez, spoke about the need for teachers of color to speak on the issue of child detention, the impact that detention has on students and the important role teachers play in protecting and advocating for our students.

Although our group traveled to the border to make sure our message was heard, we know that students, teachers and communities have been organizing around these issues for years in Chicago. Organized Communities against Deportations (OCAD) has been working tirelessly to eliminate the carve outs in the Welcoming Cities Ordinance to make Chicago a true sanctuary city and to eliminate the gang database that criminalizes our Black and Brown youth. And the Illinois Coalition for Immigrant and Refugee Rights (ICIRR) has organized a hotline that community members can call for assistance on immigration-related matters.

Our hope is that teachers across the union get more active in the fight for immigrant justice. We think teachers’ unions across this country have a huge role to play in this struggle. Not only should we demand a fair, appropriate, well-funded education for all newly arrived students, but our union should join the growing call for the U.S. government to end its policy of separating families, abolish the Immigration and Customs Enforcement (ICE) and ultimately grant amnesty to all undocumented people living in the United States.

Unless you are a person of Native American descent, you or your family have migrated to this country. This is the same act for which many migrants are now being criminalized. The migrants enduring trauma under the Trump administration are not distant people. They are our brothers, sisters, nieces, nephews, aunts and uncles. They are our students, their parents and their family members.

Please join our fight as we continue in this struggle to protect our students. Join the CTU Latinx Caucus, the Bilingual Committee, check out our contract proposal around Bilingual Education and Expanded Sanctuary, or attend our Expanded Sanctuary Workshop Series in April, May and June to learn more.