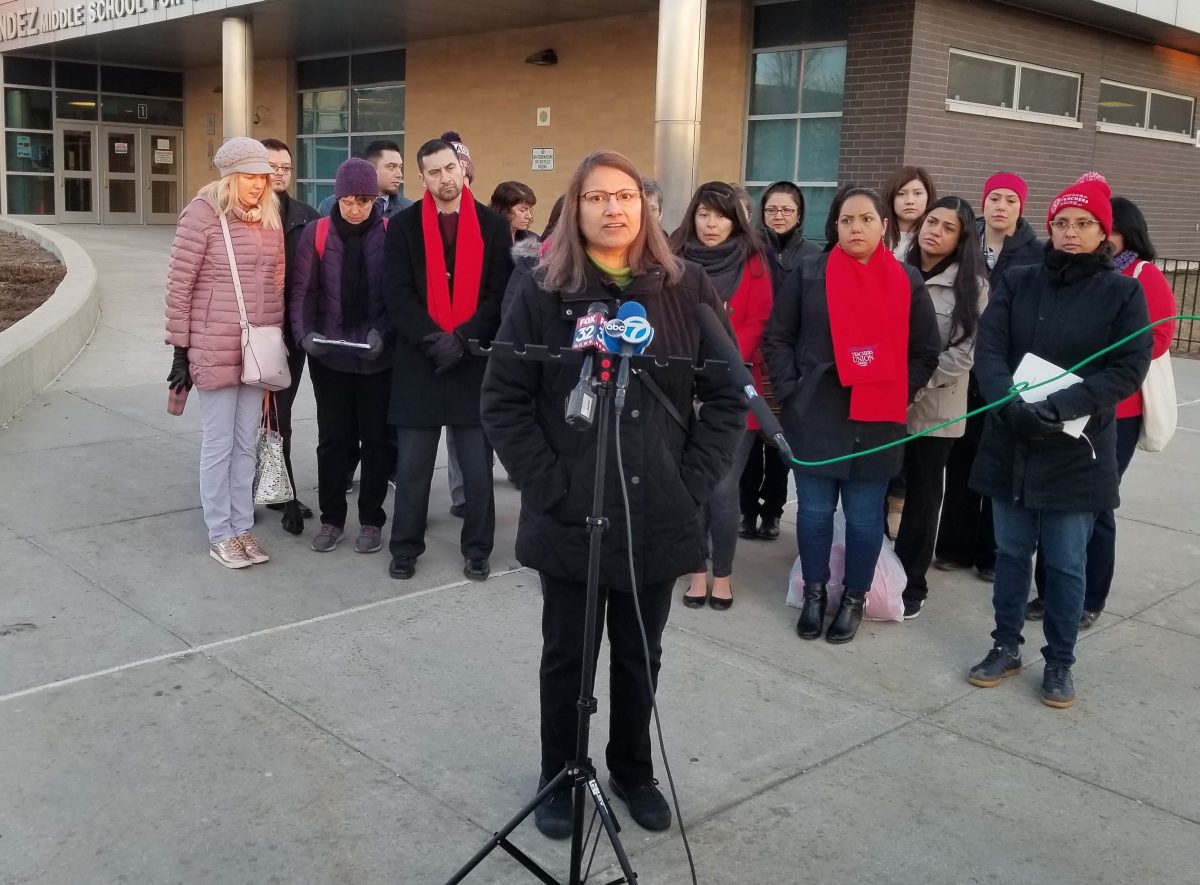 A third of Chicago Public School (CPS) students are Latinx, with many just beginning to build their English language skills. Yet in early March, CPS began administering a rebranded statewide test, the Illinois Assessment of Readiness (IAR), to students, including newly arrived immigrants who have been in the country for less than a year.

That decision infuriated teachers and allies, who are pushing back, asking the Illinois State Board of Education (ISBE) to suspend the test for all students, including students who are new to the country and calling on CPS to advise parents that their children have the right to opt out of the worthless test.

In March, teachers and allies held a press conference at Hernandez Middle School to outline the educational harm and hardship the test causes for new English learners and to demand that CPS respect students’ right to opt out. Located in Chicago’s Gage Park neighborhood, Hernandez students are over 96 percent Latinx.

“This test robs students of critical classroom time and forces thousands of children to take a high-stakes test in a language they do not understand,” CTU Financial Secretary Maria Moreno said. “This test is psychologically damaging, humiliating and frustrating for students. It causes enormous anxiety for students who do not yet understand English for no other reason than they are new to our country.”

Illinois’ new policy of testing non-English speaking newcomers in English Language Arts has emerged as a critical issue for teachers and parents,  especially since children’s test performance will be used as a baseline score, even though these students lack language skills in their new nation.

In past years, CPS has pressured students to take the test, which can take six hours or more, and undermined parents’ efforts to opt their children out of the exam.

“We are calling on CPS to stop hurting our English language learners,” Nancy Serrano, a bilingual teacher at Hernandez, said. “No student should face the duress of having to take a test in a language they do no understand. CPS should inform parents of the right to refuse the test and opt out and provide guidance on how to do so.”

Serrano also noted that state law mandates newcomers receive instruction in their native language so it makes no sense to test students in a language they cannot understand.

“State law says that if kids are not dominant in the English language they must be provided instruction in their native language,” she said. “So it doesn’t make sense that we follow bilingual ed laws when it comes to instruction but then we’re testing students in English.”

CTU educators charge that the test has little value as an assessment tool and instead is often used as a bludgeon to undercut educators whose students fail to “make the grade.” Educators are demanding that CPS reverse its past policy of misleading staff, parents and students about the right to opt out and end its practice of implying that schools with less than a 95 percent testing threshold could lose funding, which is false. In fact, low participation can now make a school eligible for additional state funds.

Instead, educators want CPS to treat students who choose to opt out with humanity and respect—and change past practices of intimidating parents who wish to opt their children out of state testing or retaliating against teachers who support students’ and parents’ rights.

The CTU is also asking the new state superintendent to revise ISBE’s  existing policy that says parents have no right to be involved in opt out.

During Bruce Rauner’s tenure as governor, ISBE acknowledged that children had the right to opt out. But, at the same time, ISBE also claimed that parents had no right to be involved in that process. Instead, the state insisted children as young as five had to inform their teachers that they wanted to opt out of the test. Parental opt out is allowed under federal law and California, Wisconsin, Utah and Pennsylvania have formalized legal opt-out rights in their states.

Educators hope that ISBE’s new leadership will be more receptive than the previous administration to protecting non-English speaking and other vulnerable students from unnecessary, high-stakes testing.

The “new” IAR test for third through eighth graders is essentially a rebranded PARCC test, which parents and educators have condemned as a boondoggle for students and teachers, but a lucrative source of profit for Pearson, the largest education company in the world. Most states have abandoned PARCC as the national movement against high-stakes testing has grown and a growing body of research exposes its shortcomings.

The CTU has made more support for bilingual education a linchpin in its contract negotiations. The IAR, they argue, thwarts contract demands that seek to protect these students and support their educational needs.