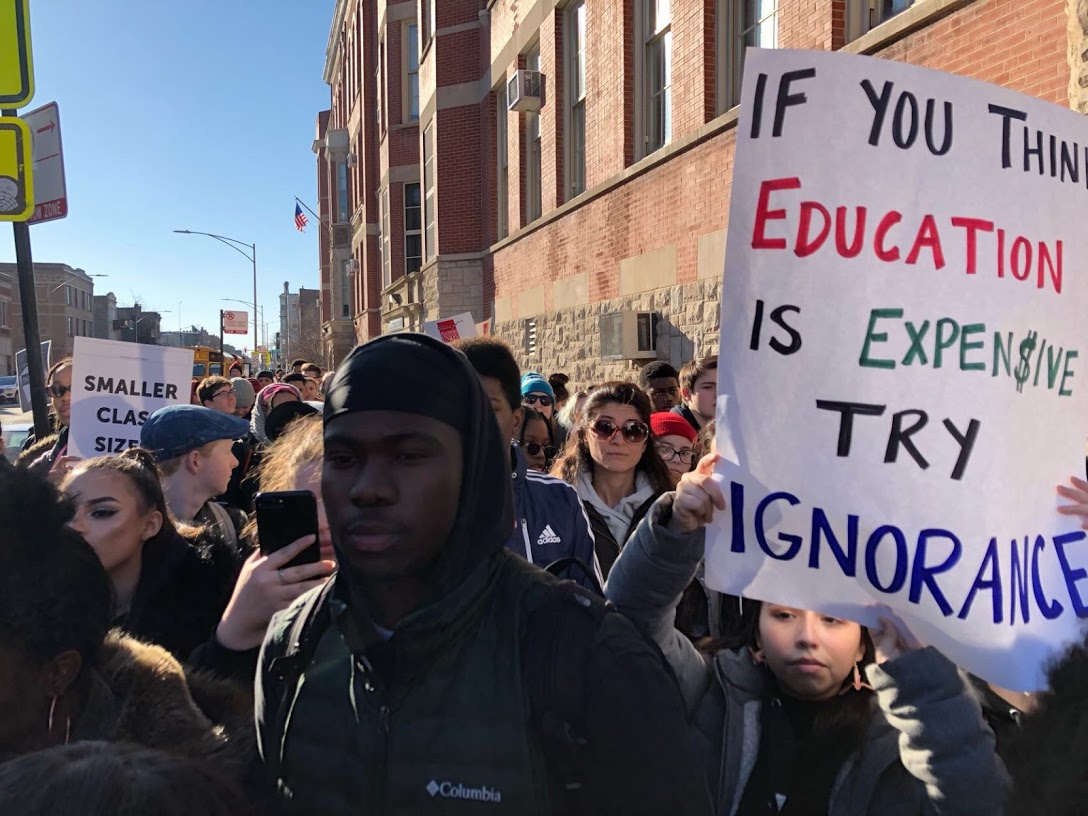 On the verge of the first contract school strike in the nation, ChiArts teachers are demanding smaller classes, equal pay, more classroom resources, and pension security.

Chicago’s charter schools have drawn increasing scrutiny for lack of transparency and accountability, forcing strikes against two different operators in the last four months. But Chicago Public Schools (CPS) contract schools operate with even greater secrecy and less accountability and union educators are on the cusp of striking one of those contract schools, the Chicago High School for the Arts (ChiArts).

Chicago Teachers Union (CTU) members at ChiArts are on the verge of what would be the first strike against a publicly funded and overseen contract school in the nation’s history. ChiArts teachers and students held a speak out in March to outline their demands as the ChiArts board was holding its secret board meeting.

“We need adequately resourced classrooms. We need fair compensation to keep and attract great teachers and stem our 20 percent turnover rate each year,” Herik said. “ChiArts could be a sustainable, great school for all, but management has to choose student learning over money.”

ChiArts teachers’ current base salaries are 35 percent less on average than they would be in CPS—and 54 percent less than in CPS schools when retirement and pension contributions are factored in—even though educators teach the same public school students and the school is funded by CPS at the same per-pupil rate as district schools.

Teachers receive less compensation for advanced degrees and many teachers are forced to work multiple jobs just to cover classroom and living expenses.

Yet management has been flush with public dollars from CPS over the years. Besides annual education funding, CPS has forked over $40 million to refurbish ChiArts’ various locations, including $31 million in renovations at its current building, the former Lafayette Elementary, which Rahm Emanuel shuttered in 2013 over the passionate objections of parents.

Educators also are demanding that class sizes be capped at 28, in the wake of class sizes that have been creeping higher consistently for the last three years.

Teachers also are pushing for adequate resources in those classrooms. Today, teachers are forced to pay for or independently raise funds for needs that range from English books to science supplies and equipment. One low-wage science teacher has spent $1,700 of his own funds this year alone for classroom supplies and physical education teachers are personally funding upwards of 70 percent of curriculum and equipment costs.

Low wages have driven teacher shortages. For example, management has yet to hire a certified teacher to teach more than 100 students in Advance Placement and freshman biology. Instead, those classes are “taught” via computer-based curricula.

“We work our hearts out for our students. We love our students and they love us—just look at how many are in the street with us today,” special ed teacher Sunni Ali said, referring to over 100 students who walked out of their after-school art programming to support the teachers’ rally. “We are tired of being treated like second class educators.”

Teachers also charge that as bargaining has heated up, management hostility has intensified. Last month, ChiArts hired a second law firm to assist in efforts to avoid providing ChiArts teachers with a pension. Despite receiving the same per pupil funding from CPS as all charter and district-run schools, ChiArts makes no contributions to the teachers’ pension fund.