Back to school: Kenwood Academy students grill mayoral candidates on education and race 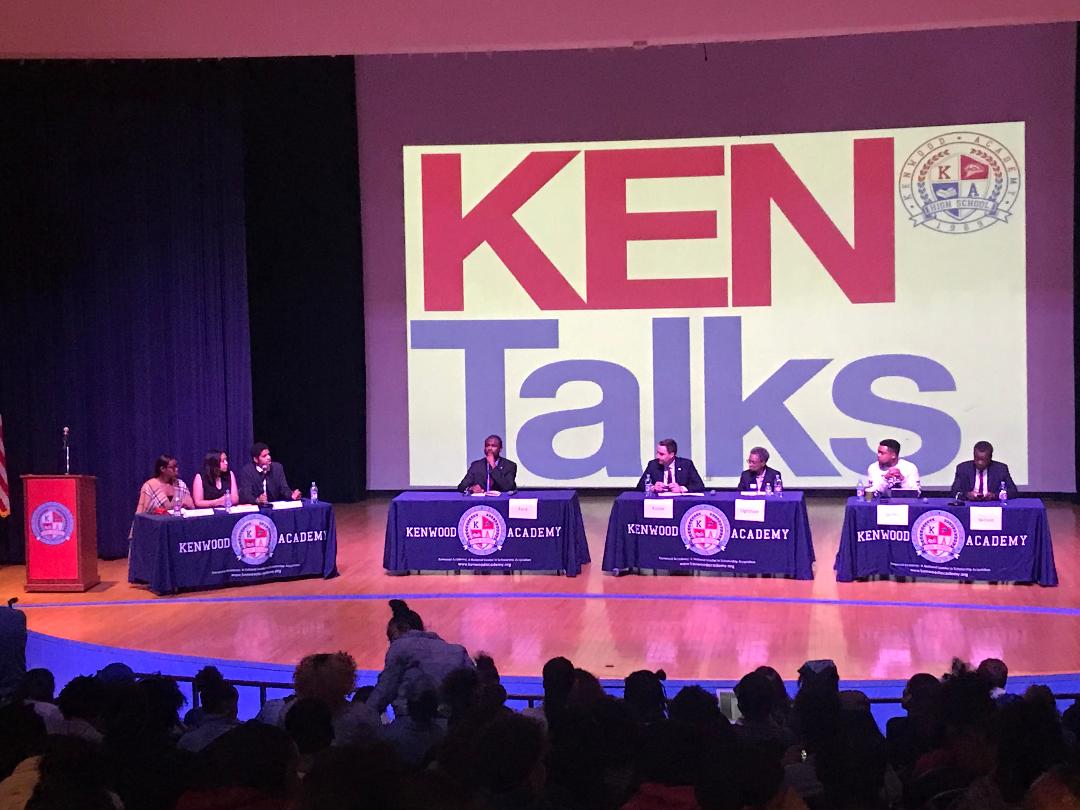 On Feb. 12, students, teachers, and staff gathered in the auditorium of Kenwood Academy High School to listen to five mayoral candidates discuss their campaign platforms and answer students’ questions. The town hall was planned and organized by students in [teacher Dave Stieber’s] Global Issues class, and students were responsible for not only thoroughly researching each candidate’s platform and crafting detailed questions, but also reaching out to candidates and their campaign staff, moderating the forum, and staffing the event. While only five of the fourteen mayoral candidates—La Shawn Ford, Lori Lightfoot, John Kozlar, Neal Sáles-Griffin, and Willie Wilson (who arrived halfway through the event)—attended the town hall, the event drew a sizeable audience of engaged students.

The town hall was moderated by three Kenwood seniors: Taylor Wilson, Zion Cobb, and Christian Ward, who asked candidates questions that largely focused on education reform and South Side neighborhood improvement. The questions themselves were far from easy: students asked candidates to address the racial disparity between Chicago Public Schools (CPS) teachers and students, gentrification and the lack of affordable housing in minority communities, segregation, the school-to-prison pipeline, and the inequitable distribution of Tax Increment Financing (TIF) funds across the city.

“Some issues that I think I’m worried about are definitely the TIF funds, we kind of discussed that in our class a lot—the fact that they aren’t going to the right places,” said Nia Priest, a senior and the president of Kenwood’s National Honor Society chapter, in an interview. “We know that a lot of that has to do with the aldermen, but it definitely starts with the mayor. So, I’m definitely kind of nervous in seeing who’s gonna win and if that’s going to change.”

Students described the process of organizing the forum and contacting candidates as a challenging but rewarding experience.

“It was kind of difficult just because of the fact that some of the candidates didn’t have updated information on their website, some of the emails were not going through…we could not get in contact with a few of the candidates for weeks,” said Taniyah Bates, a senior. “[It put] us in a different position than just an average student at Kenwood. It was really eye-opening because we learned how to communicate better, we learned how to present ourselves better.”

Kelli Bryant, a junior, recalled her difficulties in reaching out to her assigned candidate Bob Fioretti, who was slated to attend the forum but canceled at the last minute.

Throughout the moderated portion of the event, the candidates were actively engaged with appealing to the students and their interests, often noting their South Side roots or their experiences with CPS and attempted to distance themselves from traditional Chicago machine politics. In response to the question regarding racial disparity between CPS teaching staff and students, West Side state Representative Ford mentioned his teaching experience in CPS, highlighting the importance of having Black teachers (particularly Black male teachers) who can reduce incarceration rates among Black male students. Ford said that he would propose that students who wanted to teach in CPS would be able to attend City Colleges for free. Former Police Board head and federal prosecutor Lightfoot suggested a similar policy proposal for a teacher residency program that would provide prospective teachers with stipends so that they could gain classroom experience while still earning a salary.

Candidates also took issue with CPS’ “college-or-bust mentality” and supported more vocational opportunities for students. Attorney John Kozlar introduced his “K-10” plan as an alternative to the “K-12” model. In the K-10 model, students would go through traditional classroom schooling until the end of their sophomore year of high school, at which time students would be allowed to choose whether they want to pursue a more academic, college-oriented direction during their last two years, or pursue a 50-50 split curriculum that also offered vocational or job-training programs. Lightfoot noted that her platform would include increased investment in early childhood education, and suggested the institution of a Chief Diversity Officer, whose hypothetical duties she did not expand upon. Medical supplies multimillionaire Wilson discussed providing every school with the latest technology and suggested reopening some of the schools that were closed in 2013. He seemed to imply his support for a curriculum focused more on vocational and trade training, noting, “George Washington got nothing to do with today.”

This town hall was also Neal Sáles-Griffin’s first event as an official mayoral candidate after an extended period in which he was required to defend and authorize the signatures on his petition for mayor against a challenge from Wilson. Sáles-Griffin notably emphasized his Kenwood upbringing and his experiences at CPS as a student and later as an adult through his nonprofit CodeNow, which was especially notable for students like Taylor Wilson, a senior and one of the co-moderators of the forum.

Candidates also responded to two student-submitted questions regarding concrete protections for LGBTQ+ students in CPS and their thoughts on the impending $95 million police academy slated to be built on the West Side. While all of the candidates expressed disapproval of the decision to build the police academy (though Lightfoot maintains that a new police academy should be built at some point, just with more community input), students like Bryant and Bates noted afterwards that they especially agreed with Lightfoot and Willie Wilson’s proposals to see that money being redirected towards education and schools on the South Side.

The candidates’ responses to anti-bullying policies for LGBTQ+ kids varied. Ford spoke to his experience as a state representative and his voting record of supporting marriage equality and civil unions, though he, like Wilson and Kozlar, did not suggest any clear policy proposals. Sáles-Griffin suggested more social workers and bias trainings be introduced to CPS and promised a fuller platform to come. Lightfoot spoke to the issue of rampant homelessness within young LGBTQ+ communities and expressed the need for more services and support networks for these students, along with stronger anti-bullying policies. Lightfoot’s status as the first LGBTQ+ candidate for mayor initially piqued Priest’s interest in selecting Lightfoot as the candidate she wanted to research, and Taylor Wilson echoed the same anticipation for Lightfoot’s candidacy.

Rachel Kim is the Southside Weekly’s education editor. This article is reprinted, in part, from that publication.