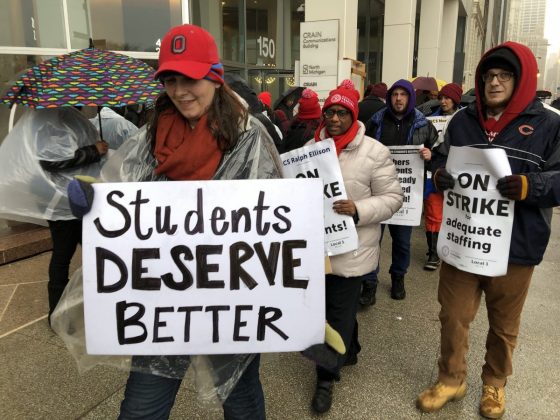 CTU CICS members braved the cold, rain, sleet and snow fighting for a fair contract that protects their students and provides stability and respect for educators. The tentative agreement, if approved by the rank and file, would immediately raise paraprofessional pay to the CPS salary schedule.   Teachers also won pay lanes for advanced degrees and an immediate raise averaging 8 percent that will meet or exceed the CPS salary schedule by the end of the four-year contract.

CICS’ intransigence made the February strike the longest charter strike in U.S. history, a designation the charter operator should be ashamed of. The nine-day strike saw CICS bosses calling the police to bust up the picket line at a southside school, sending false information to parents and the press and refusing to send its CEO to the bargaining table.

CTU responded with strong pickets at all four schools every day. Members then hit the streets of Chicago’s Loop, taking over CICS headquarters, rallying at the Thompson Center and staging a two-hour occupation in the Loop lobby of Price Waterhouse Cooper, where the CICS Board president and treasurer works.

“It took nine days, but our members’ solidarity and unity won out,” CTU Vice President Stacy Davis Gates said. “We have achieved a contract that provides fair compensation to educators and more resources for our classroom. And we’ve sent a message to the entire charter industry that it’s time to clean up their act.”

The agreement also ensures that future increases in public school funding are invested directly in the schools, rather than being captured by corporate management fees, a victory with far-reaching implications for the entire charter industry. Strikers also beat back management’s attempt to cut family leave for paraprofessionals and won paid parental leave for teachers for the first time ever.

Educators won reductions in class sizes—a key sticking point in negotiations—setting class size goals at 28 and barring any classroom from holding more than 30 students. Plus, all kindergarten through second grade class are now guaranteed to have a full-time teaching assistant.

The strikers also won a shortened work day, with no cuts to instructional minutes, a 7 percent pension pick-up and more affordable health care coverage for families. And the new contract includes sanctuary language to protect the school’s immigrant students and families.

As a result of CTU’s public pressure, the charter also has announced it will “revise” its fee structure for schools, which until this agreement had drained up to 30 percent of the public dollars it receives away from the classroom. Both CICS and Civitas Education Partners (CEP), the charter’s management company, will be forced to return a combined $4 million back to the schools.

“After a historic strike, we’ve won a historic contract that not only improves the working and learning conditions in our schools but changes the way CICS does business,” Jen Conant, CICS bargaining co-chair, said. “We want to thank our parents and students for their patience and support and our members for their steadfast dedication fighting for the schools we all deserve.”

A long list of public officials, including Cook County Board President and mayoral candidate Toni Preckwinkle, supported CICS educators during the strike. During the first week, Preckwinkle joined a downtown rally declaring, “Teachers’ working conditions are students’ learning conditions—and both need to improve at CICS.”

CTU CICS leaders are proud to say the new contract accomplishes both those goals.

This article appears in the February 2019 issue of the Chicago Union Teacher. 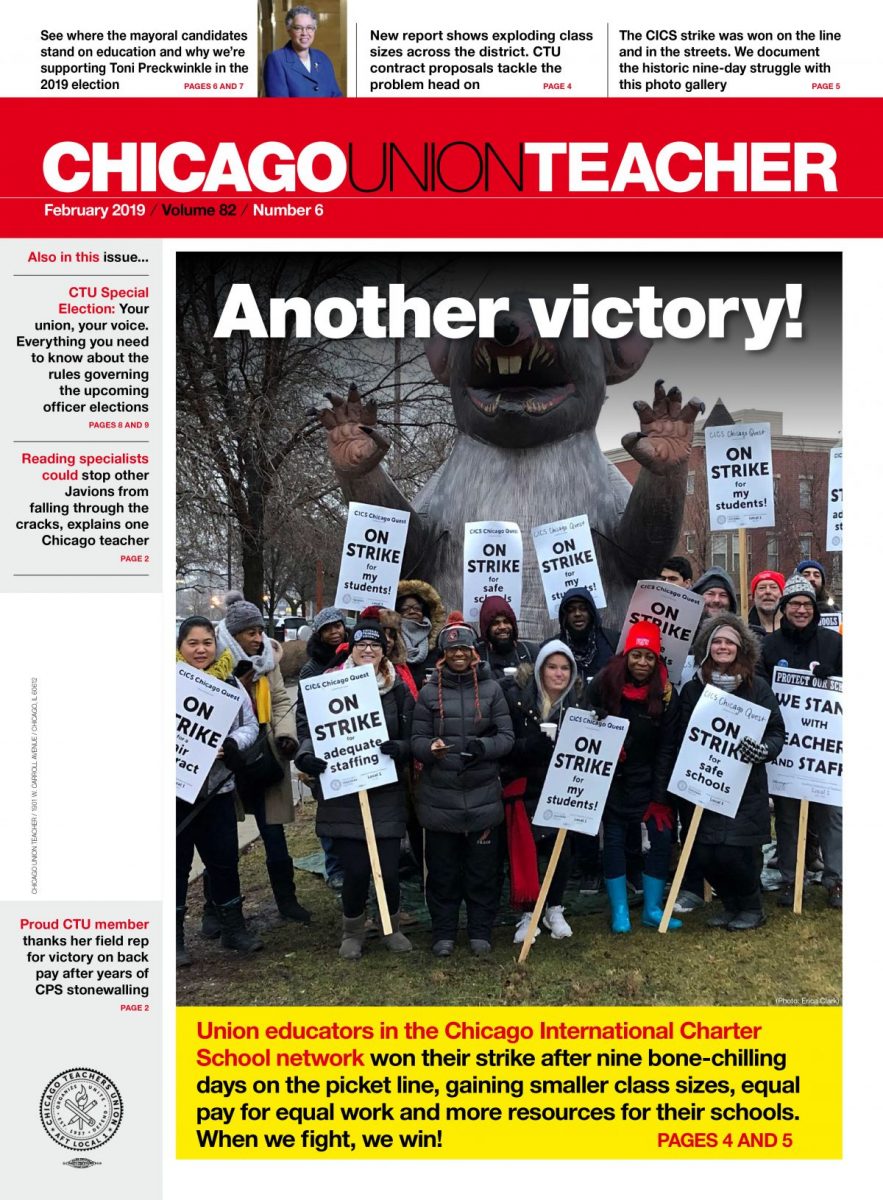