Our fights are heating up, even if the weather is not | President’s Message 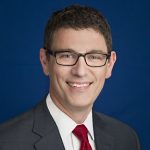 During the Jan. 15 press conference when we presented our contract proposals to the mayor, one of the first questions asked was how the city would pay the $1 billion price tag of our demands.

The next day’s headlines screamed, “CTU demands rich people” pay for teacher raises and other school needs. The Chicago Tribune editorial page—with two hit pieces on us in a span of five days—followed up by accusing us of being on a “collision course” with taxpayers.

But we know full well that the city’s 1 percenters and their power brokers don’t take kindly to talk of making the wealthy pay their fair share. That’s not something the mayor and his backers want to hear, especially as his lame duck administration tries to push through billions in giveaways to wealthy developers.

But the answer given that day by our vice president was spot on. If the truth hurts, let the rich feel the pain that the disenfranchised and our members and their school communities have been feeling for years. A city that can find $2 billion for Amazon and Jeff Bezos—the richest man on the planet—$1 billion for the unwanted Lincoln Yards development and $1 billion for the Riverwalk can find the money to invest in our schools. This city can pay teachers fairly, lower class sizes and provide more resources and staffing to schools that have been starved of critical services for the last eight years.

It’s no surprise that our sisters and brothers at Chicago International Charter School (CICS) faced similar questions when they announced their strike date, and now stand on the verge of a work stoppage next Tuesday. And our answer was the same. CICS has $36 million in the bank, with $20 million of it funneled to an investment fund controlled by a former charter executive. The CICS CEO rakes in $230,000 a year to manage 14 schools, nearly as much as Janice Jackson earns managing more than 500 schools. CICS saw a 13 percent boost in state support thanks to the new school funding formula, which our union helped pass through the Illinois General Assembly.

But you’d never know any of this by looking at a resource-starved CICS classroom.

If CICS has the money for bloated management and cushy deals with former executives, we expect it to pay teachers and paraprofessionals a living wage, provide maternity benefits, reduce class sizes and provide more classroom supports.

Because let’s be clear, whether its Oklahoma, North Carolina, West Virginia, Kentucky, Los Angeles or Chicago, educators are standing up and fighting back. We’re raising our collective voices to say “Enough!”

Enough of tax breaks to the wealthy on the backs of our students; enough with ignoring and disrespecting educators; and enough with depriving special education students and students from Black and Brown communities the services they need to succeed.

“For the schools our students deserve” has been the mantra of our union since 2010, and it’s now a battle cry being raised by educators across the nation. We should all feel pride in that accomplishment and reaffirm the strength of those words in our current contract fights with both CICS and the mayor’s handpicked Board of Ed.

We intend to bargain hard with Rahm Emanuel and his successor, and bring members, parents and community allies into the fight for the schools our students deserve. And we will support a new mayor to the extent he or she does right by our schools. But we will not hesitate to act independently and fight the new administration if we are forced to.

Whether it’s against Acero, CICS or at the school-level in our district-run schools, you all have shown that you are ready to do whatever it takes to win fair contracts that put students and their educators first. Make no mistake, we have our work cut out for us. But I am confident that our unity and collective struggle will see us through.

Stay safe and stay warm, sisters and brothers.
In solidarity, 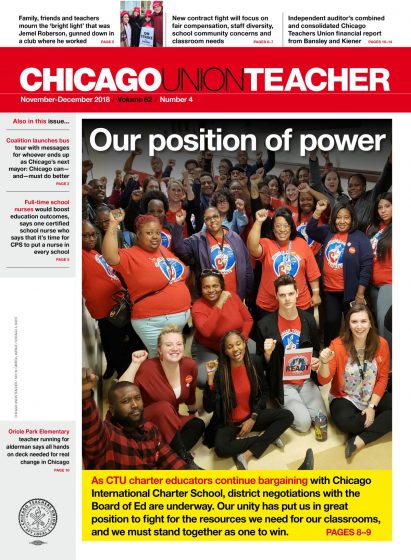