In our last contract battle, led by CTU President Karen Lewis, the Chicago Teachers Union won 20 Sustainable Community Schools (SCS) for families that rely on Chicago Public Schools. Much like the widely heralded I Promise School that LeBron James is building for his hometown of Akron, Ohio, these schools will serve as an anchor in neighborhoods on the South and West sides of Chicago. The SCS model recognizes that transformative services for students are not a temporary, one-shot arrangement, but rather represent and embody sustainable changes to the way we think about educating the whole child—with family and community partner involvement at the core.

The irony of this particular investment in a post-Janus America is that it was won in collective bargaining, a power that the CTU exercises to create justice and equity in our school communities. This is the same worker power that has been repeatedly marginalized by the likes of Illinois Governor Bruce Rauner and Chicago Mayor Rahm Emanuel . By using collective bargaining as a pathway to sound policy that enriches communities, the CTU is fighting to provide Chicagoans with powerful tools to combat the chronic defunding of public accommodation and the paralyzing violence that permeates our neighborhoods. Collective bargaining is the avenue by which students and their families will be provided health care and trauma-related counseling services—services that Mayor Emanuel has slashed.

Unlike the lion’s share of the investments approved by Emanuel’s handpicked Chicago Board of Education at its July 25, 2018 meeting , these 20 Sustainable Community Schools will be established in neighborhoods that struggle with concentrated poverty and large-scale disinvestment—both public and private . These schools are located in de-prioritized neighborhoods where Black and Brown families live, where housing is becoming increasingly unaffordable and where the unemployment rate and incidents of crime are regularly off the charts.

In contrast, the SCS model will build transformational schools where students, parents and their communities play a key, self-deterministic role in public education, in partnership with educators. This model also supports notions of racial and social justice through its effort to provide real equity to the children of color who make up the bulk of students in CPS. What will make these community schools sustainable is both a commitment to funding and resources, and a commitment to the long-term process of developing school-community relationships that support implementation of proven strategies to the fullest extent.

One of the catalysts for SCS came in 2012, when the CTU released a report titled The Schools Chicago’s Students Deserve . This report outlined 10 broad, research-supported practices in schools, including:

Five years later, after a four-year process in which the CTU was a key participant, the State of Illinois passed a landmark school funding formula. This formula was built on an evidence-based model that puts the state on a path to increased support for schools. The new formula also allocates dollars based on student need, and explicitly identifies the need for lower class sizes, more school counselors, additional school nurses, librarians in every school, and a broad and rich curriculum.

In other words, the CTU’s call for the schools Chicago’s students deserve is enshrined in state law.

The SCS model is one that incorporates practices that research has shown to be effective. As a result of our work at the bargaining table, and leadership from our partners in the Grassroots Education Movement, the current CTU contract with CPS includes a provision to pilot 20-55 Sustainable Community Schools by 2019. In reality, however, every school in the city needs to be an SCS. The ultimate goal is for all schools to have robust staff, programming, and parent and community engagement.

Winning funding for the SCS pilot is a monumental achievement, but our work is ongoing. The mayor and his handpicked Board of Education continue to fail at providing resources that will help our school communities—forcing CPS students to learn in some of the largest class sizes in the state. There are fewer than 140 librarians and less than 150 certified school nurses across more than 500 public schools that serve 380,000 children. Student-to-social worker ratios are 1,100-to-1. The only way to unlock our students’ full potential is to place funding where it needs to be, and to do that, two things must occur.

The State of Illinois and the City of Chicago need to raise revenue from those who can most afford to pay, and the mayor must end his system of student-based budgeting (SBB). SBB punishes school communities for enrollment decline even when schools are far below the level of resources needed to serve their populations. SBB also treats every student the same, regardless of income level, segregation and/or language status. CPS, controlled by the mayor, could also utilize short-term efforts like tax increment financing (TIF) surpluses and a corporate head tax to bridge the gap to new funding.

The safety and security of our students is at stake, as is their ability to grow into thriving, productive and engaged adults. As President Lewis said more than a year ago, “We must eradicate the conditions that create violence. That means policy change and resources: fully funded schools and thousands of new jobs that pay a fair wage.”

Having an SCS district is not out of reach—it simply requires a change in governmental priorities. Both Mayor Emanuel and Governor Rauner ensured that their children attend schools that provide the kinds of adequately resourced supports that sustainable community schools provide. Chicago’s public school students—the vast majority of whom continue to be denied these resources and this commitment—both need and deserve no less.

This article appears in the September 2018 issue of the Chicago Union Teacher. 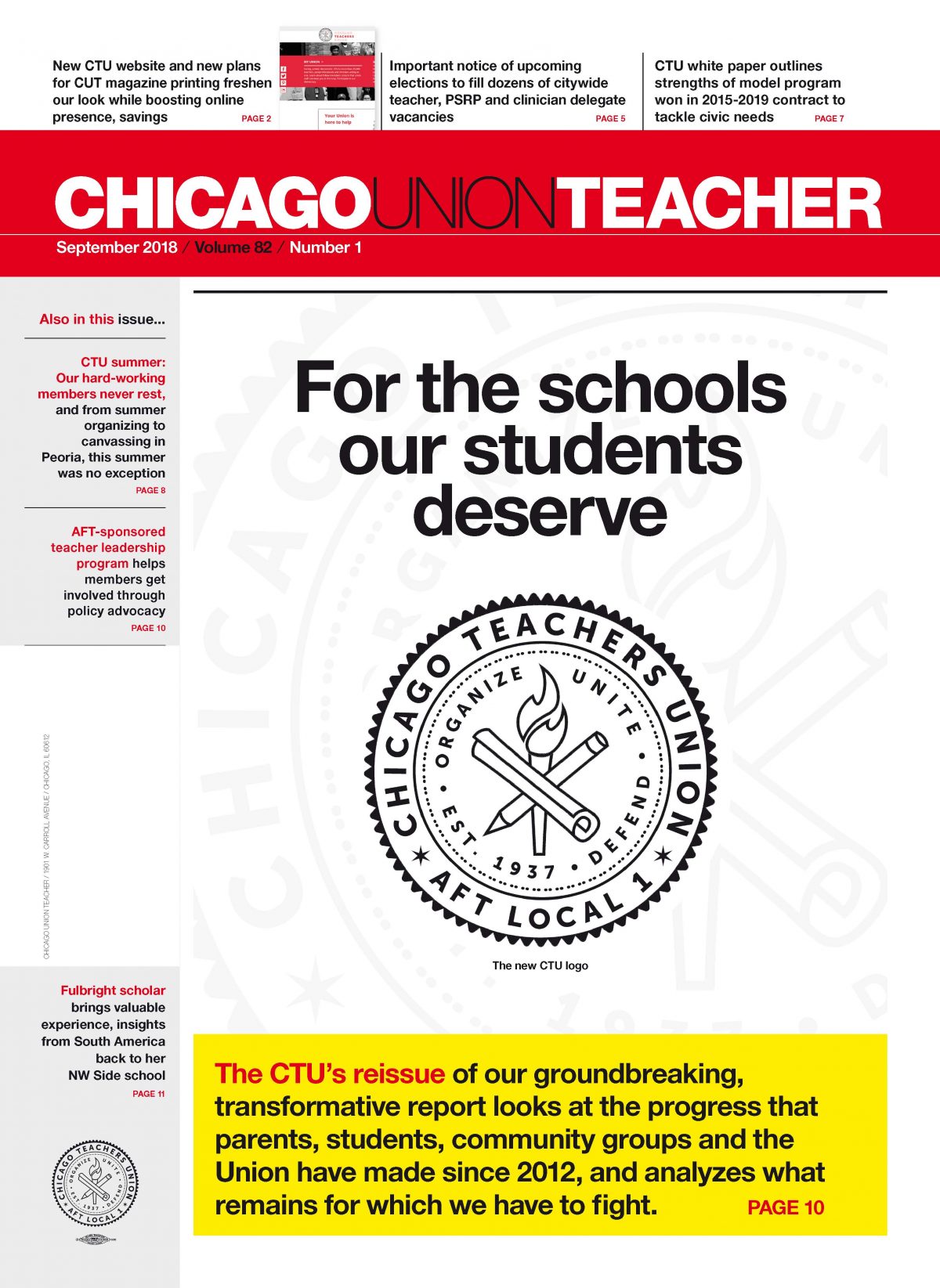